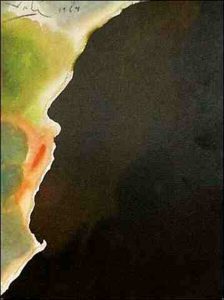 ‘A Traveling Homeland’ – this is the name of Daniel Boyarin’s book. He refers to the phrase ‘Lech Lecha’ to say the following:

‘The biblical story is not one of a person who is born from the land but one of always already coming from somewhere else.”

Paraphrasing Boyarin, the key value of the Jewish people is in ongoing journey. Perhaps, we should take the advice and try to continue our journey, keep developing rather than staying at the same level of our education, worldview and spirituality. Or, perhaps, it can have a more literal meaning. Maybe we always need to have a fresh look at the world from outside. One of the advantages of constantly being on the way is that it allows the person to be outside all the time and see what local people usually ignore. What if Jews are being constantly commanded ‘Lech lecha’, ‘go forth’?

Rashi, however, understood ‘Lech lecha’ differently. ’Lech Lecha’, according to his interpretation, the phrase means ‘go for you, for your own benefit, for your own good’. Following Rashi’s understanding, we should always look inside ourselves and trust our feelings when we make decisions. In the famous Hasidic teaching “Before his death, Rabbi Zusya said, ‘In the coming world, they will not ask me: ‘Why were you not Moses?’ They will ask me: ‘Why were you not Zusya?” Perhaps, the phrase ‘Lech lecha’ is a reminder for us to stop for a moment and to listen to ourselves and ask ‘What is good for me? What would be a good decision for me?’

Another coincidence is that this Tuesday, 7th of the Jewish month Cheshvan, there was a brand-new Jewish festival, which is called ‘Diaspora Israel Day’. It was introduced to the Jewish world by the Israeli Movement for Progressive Judaism and it is beginning to be marked in some synagogues’ calendars.

The 7th of Cheshvan is chosen for the festival because in the Mishnah, Ta’anit 1:3 it is written that Israel-based Rabbis didn’t recite prayers for the rain for fifteen days after the Festival of Sukkot to let Diaspora Jews come back home safe and dry. This is an ancient example of the bond and care between Israel and the Diaspora. The Torah portion ‘Lech Lecha’ has a key role in the special Haggadah made for this ‘start-up’ Jewish festival. It begins with the following commentary on the first verse of the Torah portion ‘Lech Lecha’: ‘The Hebrew people did not begin its life in the Land of Israel, but outside. From this first journey down to the present day, the Jews have maintained their character as a wandering people, to and from the Land of Israel.’ The connection between Israel and Diaspora is deeply rooted in our tradition. There is even a traditional food for the day – marzipan. It is sweet, it has been made and used in different cultural settings and it symbolizes the rich diversity of Jewish life.

In my opinion, the two meanings of Lech Lecha represent a question which all immigrants ask themselves – ‘to what extent do I have to give up my culture and become native to the new land?’. On the one hand, perhaps it’s better to focus on what is good for you and remain in a comfortable environment of your native culture. Let’s take the history of the London’s East End as an example. In the beginning of the 20th century a significant number of Jewish immigrants came to London from Eastern Europe. Most of them didn’t look British, didn’t sound British and maybe didn’t know much about local life. Many of them made a conscious decision to ‘go forth’ and to become a part of the British Jewish community and society. However, as they became British, they also remained themselves and contributed to British Jewry. I will not be surprised if many of those who are reading this article have roots from the Russian Empire. Looking at British Progressive Jewry today it’s impossible to say that it is either German or Portuguese, pure Ashkenazi or Sefardi, but rather it is a bit of everything. Acceptance and celebration of our diversity – that is what I think makes Progressive Jews today so valuable and sets an important message for our society.

Perhaps ‘Lech Lecha’ is meant to have a double meaning. There is a beauty in the wonderful ambiguity of the Hebrew. Perhaps there should be a balance between its two meanings – ‘going outside’, being independent, and ‘going inside’, having a deep understanding of who we are, what our values are, and what we need in order to be ourselves.