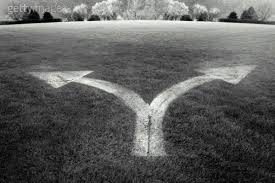 The scar of leaving, a good trace

“Lekh lekha, go, go for you”. The sentence that introduces this weeks’  Parashah appears to be one of the  maxims of soon-to-be Israel. When, fifteen years ago, a film director named his work “Go, Live and Become”, the reference was striking. Whether an act of uprooting or short-scale changes, the theme of separation is central to Biblical stories.

Pirkei Avot teaches us that Abraham underwent 10 hardships. The Mishnah doesn’t specify what they consisted of, and commentators have come up with various possibilities. Still, most of these hardships are linked to separation: he abandons his father’s house, famine in Canaan forces him to head to Egypt, he accepts circumcision and thus cuts off a part of his own body, sends off his beloved servant Hagar and their son Ishmael, and, hardest of all, he prepares himself to obey the divine order to sacrifice his son Isaac, an unimaginably painful decision.

Separation is an obligatory part of our lives, and one that is most often associated with pain, anger, even repulsion of what lies beyond our control. It seems to be an integral part of human nature.

In Midrash Bereshit Rabbah , we are told that, when God removed one of Adam’s ribs in order to shape Eve, He put Adam to sleep to avoid  future resentment on his behalf. We miss what has been taken away from us, and having the sorely missed object within our grasp can exacerbate the pain of our loss.

Hence the choice of a separated couple to avoid all communication rather than maintaining a friendship based on what still ties them together.

Hence the incapacity of someone who quit his job under traumatic circumstances to bring himself to walk past his previous workplace. Hence the pain of the bereaved individual who decides to put away all pictures and objects associated with the memory of the deceased, because any reminder of the latter’s existence is unbearable.

Abraham, on the other hand, presents exemplary behaviour in the way he deals with change. He never expresses any sign of pining or desire to turn back. Only with Sarah’s death do we see in Abraham the need to pause and reflect on his past, as he buys the cave of Machpelah to bury and mourn her, allowing himself to remember a happy time of his life, now forever gone.

Prior to this, he doesn’t show signs of nostalgia or homesickness. He seems to move forth undisturbed, even without knowing his own destination, obeying the Lekh Lekha order, headed towards a promised but unknown land. He marches on, fuelled by unequalled kavvanah, he doesn’t seem to be rushing forth like a blinded race horse.

Nahmanides sees Abraham’s move from Canaan to Egypt as a possible lack of faith, instead of enduring the famine, trusting in God’s promise. Rashi takes a different line, explaining that, on the contrary, Abraham’s temporary move to Egypt was a sign of even greater trust in the broad promise that his posterity would inherit the land of Canaan. During the Akedah, Abraham was prepared to end his son’s life yet remained hopeful for his posterity, and did not rush to execute God’s order. According to some commentators, he was aware that they would all somehow return home unharmed.

The memory of places and people that we leave behind as we advance in life cannot simply be erased. It is sometimes possible to be reunited with them later, as Rashi suggest Abraham and Hagar  (this time called Keturah) did, after Sarah’s death. Sometimes the separation is permanent, but even then we often hold onto a memory, joke, object that brings us back to our past, and that we continue to cherish.

To contribute to the exercise of coping with separation, let me quote the example of Rabbi Shimshon Raphael Hirsch, a German rabbi in the 19th century who publicly opposed the emergence of reform Judaism. Analysing the significance of the Hebrew verb “lamoul”, used in the context of circumcision, mentioned at the end of Parashat Lekh Lekha, he noticed that “moul” in Hebrew also means “in front”, and possibly to face, to stand firmly, perhaps even in opposition. Circumcision can therefore be seen as the brave act of facing what we were before and cutting ourselves from it: through circumcision, man becomes a master of his own sexual desires; therefore, someone who isn’t circumcised is called an “arel” – someone who has lost control of himself, whether physically or emotionally.

In summary, by separating the flesh, man learns to lose without being overcome by anger.

And what about women? Perhaps women who give birth go through a similar experience as they acknowledge that the child they have given birth to is no longer physically part of them – even though, emotionally, the bond between mother and child remains forever.

Beyond motherhood, we experience this emotion through many different forms within a lifetime. Separation is painful, yet is often necessary for growth.

So “Nelekh Lanou”, may we go for our own good, and may separation be beneficial to our personal growth.