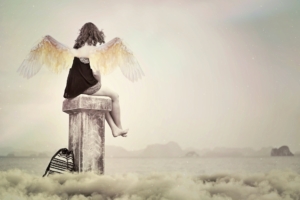 When angels are mentioned, each of us probably has a very particular image in our mind.  Perhaps you imagine chubby putti, winged babies among the clouds, or a warrior angel with drawn sword in hand; perhaps large feathery wings and shafts of light.  After perusing Halloween fancy dress for early Purim costume inspiration, you’re probably imagining flowing white robes and maybe even a halo.  If you too watched old black and white films at an impressionable age, however, you might imagine angels that look like Cary Grant in a suit, tie and winter coat.

In The Bishop’s Wife Cary Grant plays an angel called Dudley who is sent to help a struggling bishop.  The viewer first encounters him on a snowy street where Dudley miraculously rescues a baby’s pram from traffic, but the bishop and his wife take a little longer to realise that Dudley is an angel.  After all, he looks like a human, talks like a human and walks like a human, at least when anyone’s looking: especially when Dudley charms the bishop’s wife or teases an old professor who doesn’t remember him, who could tell that this is an angel?

Dudley doesn’t inspire awe or fear; other characters simply speak with him, or in one memorable scene go dancing on ice with him, as they would with any other human.  Yet as Dudley remarks at one point, deliberately misquoting EM Forster, “sometimes angels must rush in where fools fear to tread.”  Sent on their holy missions, they make timely interventions where mere humans might hesitate.  That’s true in The Bishop’s Wife; it might also apply in Parashat Lech L’cha.

At Sarai’s instigation, her servant Hagar gets pregnant by Sarai’s husband Avram, but then their situation unravels until Hagar runs away to escape Sarai’s harsh treatment.  In her moment of crisis (Genesis 16:7-8), “an angel of the Eternal found her by a spring of water in the wilderness, the spring on the road to Shur, and said, ‘Hagar, slave of Sarai, where have you come from, and where are you going?’  And she said, ‘I am running away from my mistress Sarai.’ ”  In this moment of meeting the angel, Hagar shows no fear or surprise:  she simply interacts as she would with another human.  Only afterwards does she experience a sense of awe and create a new name for God to honour her Divine encounter.

The angel’s timing is perfect, appearing when Hagar is in crisis, alone and unsure of where her next steps should take her.  He tells Hagar to return and submit to Sarai, then also reassures her that her suffering has not gone unnoticed; he confidently predicts her immediate future, motherhood, and the broad lines of her future son’s life.  Conspicuously absent from the encounter, though, are any miraculous activity and any description of what this angel looks like:  based on Hagar’s initial calm response, it seems that a Biblical equivalent of Cary Grant is as possible here as any wings, swords or halos.

Later Jewish tradition develops the idea of angels much further, but in Tanakh, especially in the first Five Books, the Hebrew word mal’akh firmly holds two meanings: ‘angel’ and ‘messenger.’  Both are closely connected, for angels are simply messengers or emissaries of God, and usage of mal’akhim often entwines the two.  In Genesis 18-19 Abraham will receive a message from men who are only afterwards described as angels, while in Genesis 32 both Jacob encounters angels and sends messengers.

Whether or not we wish entirely to rule out the existence of angels as supernatural beings, we might also consider a more mundane possibility:  that angels might be real people who are for a particular time, perhaps unconsciously, tasked with being God’s messenger.  An angel might have flown directly from heaven to that spring of water where Hagar paused, or a simple human traveller on the road to Shur might have temporarily become God’s agent before his own steps led him on again, away from Hagar.

Each of us can probably think of times, usually more obvious in hindsight, when at a critical moment we unexpectedly encountered someone who spoke words that helped us to find a new direction.  They may have asked a simple question or given detailed advice; they may have met us for only a moment or stayed for a while before our paths diverged.  These angelic encounters are easy to rationalise as pure coincidence, yet perhaps we appreciate them more when we recognise an element of divinity in them, even if that recognition only comes later.

Whether our angels are overtly divine or apparently human, may we all be blessed to encounter messengers who help us to find the new directions that we need on our journeys; like Hagar, may we too be moved to honour those encounters and the difference they made by rushing in where others may have feared, or simply not known, to tread.