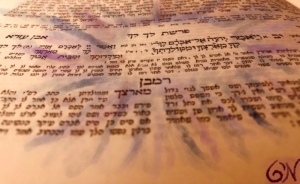 The initial words of parashat Lech Lecha provide us with the very first instruction given by God to Avram: ‘The Eternal said to Avram “You, go forth from your land and your birthplace and your father’s house to the land I will show you.”’ (Gen 21:1) The two verses which follow contain promises that Avram will become a great nation, blessed by God and all nations, that he himself will be a blessing, while those who curse him will themselves suffer curses. Without delay, Avram departs Charan with his family. This may be the beginning of the Abraham saga, but it is most certainly not the beginning of the story. In the final six verses of the preceding parashah, Noach, we learn the lineage of Terach, the father of Avram, Nachor, and Haran. Their birthplace was the city of Ur, which resides in the Persian Gulf along the river Euphrates. After the untimely death of his son Haran, who was the father of Lot, and the marriage of his two remaining sons, Terach takes Avram, his wife Sarai, and his fatherless grandson Lot, and sets off on a journey to Canaan. Unfortunately, Terach never makes it to that land, choosing rather to settle in Charan, on the southern border of modern-day Turkey, where he dies. Now if you were to take a map and look at the route from Ur to Canaan, you would see that Charan is not really on the way at all. It lies alongside the Balikh river, which crosses down from Turkey into modern-day Syria, where it meets the Euphrates river. This means that rather than traveling directly west, through the desert, Terach led his family on a northwesterly route along the Euphrates, forking north at the Balikh river, which took them even further off course on their journey to Canaan, and this was the place in which they settled until God first communicated with Avram to instruct him to complete the original journey upon which his father set. The question we are left with here is – why did they go so far out of their way to settle in Charan when Canaan was their intended destination?

The Zohar, one of the foundational medieval works of Jewish mysticism, Kabbalah, expounds on this verse to answer that very same question. The Zohar engages in biblical exegesis, which means it provides interpretations of verses of the Torah, while also diverging into midrash, theology, cosmology, and mysticism, digging deeply into concepts well beyond those verses. The Zohar has a great deal to say about these initial words of our parashah, and one of its lines of thought dwells on the spiritual journey upon which Avram must embark in order to complete his physical journey. According to the Zohar, the command of Lech Lecha – ‘You, go forth’ – contains a secret divine inspiration for Avram which imbued him with the spirit of wisdom, the ability to observe the inhabited places of the earth and judge them and their rulers on the scales of righteousness and wickedness. (Zohar 1:77b-78a) This meant that he could observe the seventy angels who were appointed over the seventy nations of the world, and the invisible conduits which run through the earth between those nations, converging at some yet unknown central location. He saw a cosmic balance in the world and was able to hold each component against the heavenly scales, but one particular location remained difficult for him to gauge, the location of centrality which we now know as the holiest of sites in Jerusalem.

The Zohar asks: Mai ta’ma d’Avraham – ‘What was Abraham’s reason?’ Why did he settle in Charan rather than continuing on to Canaan? While on the road from Ur, Avram used his divinely inspired powers, trying again and again to weigh this central location, the place towards which his family had initially set out to reach, placing it on the scales, yet unable to reach any conclusion regarding it. He came to realise that this place was the central vein, from which all other points of habitation flowed, that the supernal power rested over this place and it was too heavy, too deeply concealed, too lofty for him to fully comprehend. He finally reached the conclusion that the place towards which his father set out was indecipherably complex, and so his family diverted to Charan, settling there rather than continuing on to Canaan. Avram redoubled his efforts to gauge the central location, and God took notice of his desire and determination. So it was in Charan that God finally spoke to Avram, the first of many revelations. By the very act of speaking to Avram, a certain concept was finally understood. The indecipherability of that central location was due to the resting of God’s essence in that location, and the invisible veins which flowed out from it to all other inhabited locations were the ten sefirot, the divine emanations of God which are God’s discernible attributes as we know them through the study of Kabbalah. As Avram approached closer and closer to God, the concealment grew ever stronger, for the true essence of God is not meant for humans to experience. The inability to use his divinely-endowed powers of wisdom to gauge the location of his destination must have been utterly terrifying to Avram, for these powers had been his guide all along the path from his homeland in Ur.

And this is the point at which God, sensing Avram’s discomfort and his desire to know and understand and reach his goal, finally was revealed to Avram with the words lech lecha, which the Zohar reads not as ‘you, go forth, but as ‘go to yourself.’ God’s command to Avram was not merely to tell him to continue the journey, to leave Charan and finally make his way to Canaan. God was telling Avram that he had a personal journey on which to embark, one of understanding himself for the purpose of refining and perfecting himself in order to be worthy of the presence of God. Regarding this essential lesson of Avram’s journey, the 17th century Kabbalist Moses ben Mordecai Zacuto wrote: ‘Every person must search and discover the root of his soul, so he can fulfill it and restore it to its source, its essence. The more one fulfills himself, the closer he approaches his authentic self.’ The journey of Avram was interrupted by doubt, by fear of the unknown, by an incomplete understanding of his own self. It was the very first test he would have to endure, and there would be many more, yet this was the pivotal moment when our ancestor needed clarity to continue on his way and begin to understand his own potential, and God was there to tell him lech lecha – ‘go to yourself’ – know yourself in order to become who you are meant to be. May we all take this lesson with us as we go out on our own various journeys, whether great or small, physical and tangible, or internal and hidden, and may we begin to fulfil ourselves so that we might approach ever closer to our authentic selves.