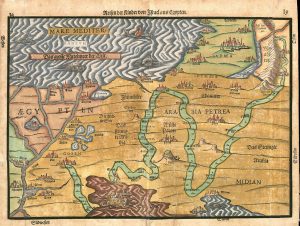 Title: The passengers speak up

When I was a young child, most weekends my family and I used to drive from Kingston to Wembley to visit my grandma and grandpa.

Despite coming from sound Jewish taxi-driving stock (my grandpa was a cabbie), I  wasn’t remotely able to remember the route. But I did have – and still do have – incredibly vivid memories of the landmarks we’d pass. Not proper landmarks; there’s nothing that interesting on the North Circular. But just little things I’d recognise out of the car window: the level crossing. The plastics factory whose logo I recognised from the casing around my clarinet reeds. The bank with an inexplicable small circular hole in its window. The café with all the bikers in black leathers. The warehouse with a strange flag on its roof that I couldn’t recognise, even though I strained my eyes at it every time we passed.

As an adult, I’m still no good at remembering routes, so when I go to visit my parents in Kingston, traversing the North Circular southbound rather than northbound, Google Maps does the hard work while I pass many of the waypoints I memorised as a child. There’s the warehouse. There’s the café. There’s the factory. There’s the level crossing. (I have no idea where the bank is and it must be at least 15 years since I last saw it; my dad clearly knows a more creative route than Google.)

The opening of Parashat Masei, Numbers 33:1-49, isn’t the most fascinating section of the Torah, looked at as a work of literature. It’s not really a work of literature. It’s more like an OysterCard journey history: “The Israelites went from Jotbah to Abronah, from Abronah to Etzion-geber, from Etzion-geber to Tzin…” Rashi skips most of it in his otherwise extensive commentary. Throughout the passage, nobody speaks. Nobody explains what’s going on. Plotted on a map, there’s no obvious pattern or sense to the journey taken.

It’s a Biblical text so formulaic and uninteresting that one leyns it to a special sing-song tune, rather than to the normal trop.

And yet I see something of my childhood journeys to Wembley in it. My recollection of those drives is very much like Numbers 33: recognising landmarks yet knowing nothing of the direction, or of how we got from one landmark to the next. I didn’t know when we were nearly at the warehouse with the flag, or just around the corner from the warehouse with the flag; I only knew it when I saw it, when we were actually there.

The vast majority of the Israelites had no say in where the people travelled during the wilderness years. They were navigated “under the hand of Moses and Aaron”. Rabbi Samson Raphael Hirsch, in his commentary on the early part of the Book of Numbers, was worried for their mental wellbeing: without control over their lives or any sense of agency, they were shuttled from meaningless place to meaningless place, all sandy and similar-looking, their names blurring into one. They lived with “complete monotony, unvarying sameness”. They were passengers in the most profound sense of that word.

But the opening of Parashat Masei is different. For once – for just a short passage, though it feels long because it’s sooooo dullll – we get to hear the voice, and feel the experience, of the common-or-garden Naphtalite or Zebulunite, so numerous and yet so anonymous in the rest of the narrative.

It gives us an insight into the tedium of the lives of those whose only role in the history of the Jewish people was to trudge through the desert, eating the same food every day and sleeping in arbitrary wadis.

It’s boring because their lives were boring.

But the sing-song leyning tune gives it a bit of energy, a bit of colour. We can only hope that our ancestors in the wilderness were able to do the same.