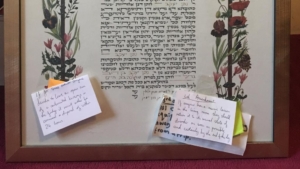 The opening verses of this week’s double Torah portion, Mattot-Masei, are a far cry from the protofeminist triumphs of the daughters of Zelophechad. It informs us that, although any vow to God or oath of obligation made by a man must be fulfilled, a woman’s vow or oath can be nullified by her father or husband, depending whose authority she is under. There are conditions to this – the man must object on the day they find out about their subservient’s oath – but ultimately, unless a woman is a widow or a divorcée, her autonomy is limited and her actions and words meaningless compared to those of the men who control their lives. It is not lost on me that we see this being played out in many different ways today, most notably at the moment as Britney Spears tries to free herself from her father’s cruel conservatorship.

As much as I would like to write about the #FreeBritney movement, there is another reason these verses have been playing on my mind. By the time you read this, I will be getting married in 17 days. (I am not a superstitious person, but I feel like I should probably add a ‘God/covid willing’). The trauma of the past eighteen months, with its illness and grief both personal and public, hasn’t exactly been conducive (for me at least) to wedding planning and excitement. Then again, as a teenager, I never thought I’d get married, declaring it a patriarchal institution I wanted nothing to do with. From being walked down the aisle, handed from one man to another, to being purchased under the chuppah in a transaction that can never be equal, there are many aspects of the traditional Jewish/British wedding that are at odds with modern progressive sensibilities.

I found myself asking my partner a few days ago whether he thought anything would “change” between us when we were married – practically, we have already lived together for years, we have a joint bank account, we’ve bought our first home. It’s easy, yes, even for a student rabbi, to wonder what the purpose of our wedding is when nothing will materially change.

So what happens when we get married? Let’s start in Genesis: Adam draws a parallel between Eve being fashioned from his rib and marriage, stating that ‘so it is, that a man will leave his father and mother and cling to his wife, and they become one flesh’ (Genesis 2:24).

The image of two becoming one in marriage pops up throughout Jewish texts, but it is perhaps most central to Kabbalah:

A man who is not married is like someone divided. And when he is joined male and female, then he becomes one body. It is found that they are one soul and one body and a man is called One. Then the Holy One, blessed be, apportions in One and entrusts a spirit of holiness in that One.

For the kabbalists, marriage has many purposes. At the most basic level, marriage allows human beings to become male and female, in imitation of divinity, which also contains masculine and feminine attributes. In fact, without being married, it is nearly impossible for the kabbalist to achieve a full and proper relationship with God. As the Zohar warns in a teaching on marriage, ‘Whoever is not complete below is not complete above.’

Moses Cordovero, a leading sixteenth century kabbalist in Safed, wrote that ‘the union and coupling of man and woman is a sign of coupling from on high’ (Tefillah leMoshe, 213a – see Jay Michaelson on Kabbalah and Queer Theology). For the kabbalists, the entire world is modelled on the male-female dynamic: both world maintenance and the workings of the Divine are realised through the (sexual) union of masculine and feminine.

The imagery of the union of the bride and groom goes beyond the human.  Zoharic passages describe the union of God, the groom, and the Shechinah, the bride. In other kabbalistic texts, the Torah is depicted as a ketubah written for the wedding of God and Israel. Ketubah le-Shavuot, written by Israel Najara, appears in the sephardic Shavuot machzor, and emphasises that the Torah was given as a covenant between God and Israel. As I write this, listening to Classic FM, the music of Kol Nidre is being played. Whilst this is a stressful sound to any Jewish professional in the months leading up to the chagim, it is fitting. We have to actively ask God to absolve us of our vows: it is not done unilaterally. Our ketubah with God is more relational than the one depicted in the Torah portion.

Susan Reuben wrote a hilarious article in The Jewish Chronicle in 2018, describing her and her husband’s practice of adding post-it notes to their ketubah. She explains that she feels disconnected to the Orthodox document that oversaw her marriage (read: acquirement) and, ‘given that there’s nothing in the ketubah about love, but only obligation, it seems reasonable to embellish it with further clauses should we feel they are useful.’ It is a joyful way of communicating small annoyances, which she describes as ‘surprisingly effective.’

Where does all this leave me? While I dislike the gender binarism and heterosexuality of all these kabbalistic teachings the underlying concept, that the two are needed to complete each other is far closer to the marriage that I envisage than the subservience depicted in Mattot-Masei. My partner and I will not have a ketubah with the traditional Orthodox text, but with a Liberal text written by my teacher Rabbi Mark Solomon. Neither of us will own the other, rather we will work together to build a home based on the values that are important to us, rather than either of us making, or breaking, vows on behalf of the other.