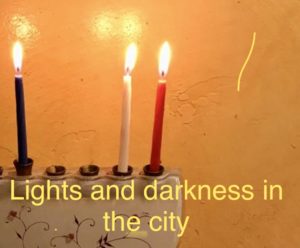 Joseph, the first politician of the bible

Before Joseph, our biblical heroes were heads of the family, clan leaders, or powerful men because of their wealth and wisdom but never politicians. Joseph is, in my opinion, the first politician in the Bible. A politician in the noble sense of the word: a servant of the city but also in a more common meaning: A person capable of reaching the top by the force of their words and ability to anticipate.

As a Frenchwoman who has recently arrived in London, I would have been tempted to see Joseph as the perfect example of immigration that was not chosen but that was ultimately very successful. Unfortunately, the repeated alerts that appear on my smartphone bring back me to the sadder reality. Now in a country where officially we live in peace, an old lady is dead after accidentally receiving a tear gas grenade when she was closing her window in Paris.  A city transformed in a battlefield.

Faced with people who were claiming bread, the legend says that Louis XVI’s wife Marie Antoinette answered:  “let them be given brioche”. At the end, the fallen queen was killed on the scaffold surrounded by men wearing red caps. Today, in Paris, a group of people wearing a yellow vest and composed of some extremist activists as well as ordinary people express an anger and violence not seen for half a century. For a long time, a minefield has been threatening to explode with two time bombs: people who are panic stricken at losing their subsidies and the feeling of being misunderstood by their leaders.

It is difficult to lead a country, especially when you know that the worst will come before the best rather than the opposite. In the Mikkets parasha, Joseph is in a situation of “crisis management” and faces up to the famine.  However, he is not the only political “visionary” of our parashah. Pharaoh also shows a real sense of leadership. He has the wisdom to delegate his power, without relinquishing his office. But above all, he takes care to legitimize Joseph’s choice by his advisors… This precaution on the part of an absolute monarch may surprise us. It proves, in fact, Pharaoh’s ability to put himself in the shoes of the Egyptian “Mister Ploni”.  In the eyes of the Egyptian population, Joseph may be just a Hebrew immigrant, a former prisoner, to whom the sovereign entrusts the keys of the kingdom!   Hence the importance that Joseph could become, not only the choice of the Pharaoh but the choice of the state…

How does Joseph impose his authority on the people, on his subordinates? According to one verse, the crowd shouts “Avrekh” when they see him … Rashbam translates this word by “the Father” which means in this context the wise man of the king[1]…  Sforno translates the word with another meaning: “Kneel down”. That is always the dilemma of the leader:  whether to impose himself by a kind of paternal wisdom or to impose his authority by fear of himself?

When he decides to marry an Egyptian daughter of an idolatrous priest, Joseph gives a sign to the Egyptians that he is one of them. Joseph shares their customs without venerating their gods.  However, this effort of integration is not enough to legitimize Joseph. Joseph acquires his stripes as a political leader because he found the best management during the famine.

At first reading, it is not an evidence.  The biblical narrator explains to us that Joseph sells wheat to some people whose the reserves have rotted. Sell? Is it really ethical? Why didn’t he distribute his wheat for nothing?  The Midrash explains that this sale only concerned the rich and not the poor. Moreover, with the money earned, Joseph enabled the Egyptian economy to work.

This unexpected development by the rotting of the first reserves obliges Joseph to ask himself the thorny question which concerns every politician:   what can I do when I risk breaking my promise? Joseph had promised that the reserves would save Egypt, but he didn’t foresee that they would rot in part.  By drawing on his own reserves, Joseph honours his commitments. Without miracles, Joseph proved to be exemplary at a critical time. He is also a model role in his private life. A verse specified that Joseph had two sons just before the famine. It is a tacit indication that he had no children during the famine. The Talmud will deduce from this verse the prohibition of conjugal relations in times of scarcity[2]. Not to add mouths to feed when others are starving.

To decision-makers, Jewish tradition also enjoins them to not ignore the will of the majority[3]. Applying this rule in the political area, outside election time, could appear to be dangerous. The voice of the street could be substituted for political and legal representation.

Joseph does not overthrow the system. In this respect, it is the antithesis or better, of the Maccabees. If revolt is sometimes essential and life-saving, learning how to avoid it is also precious. In the Bible, Joseph embodies good governance. The man is in his place. He maintains his position in respect of custom but he is careful to not ruin himself with his new power. He repeats many times that he is above all a servant of God and of the Pharaoh. Thus, he places himself at this human size which allows him to consider everyone without reducing them in size and stature.

In these times in France when the impact of a social movement is measured by the number of “likes”on Facebook or by the extent of the damage it causes; in this time when news channels inundate our screens with interviews of people in extreme states and  transform their cries into an disturbing background music, the figure of Joseph encourages us to grow up by looking the world from a human perspective, the only way  where it is still possible to admit not to be perfect and maybe to be forgiven for it  .