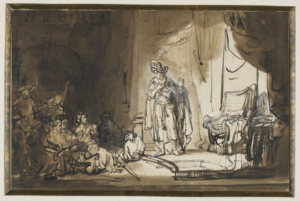 We said we had come down to Egypt to buy grain,

We told the truth, for famine was devastating our country,

We thought that it was truth, but we lied to ourselves in vain,

We were actually searching for you, without knowing, in an endless inquiry.

You were a child when we threw you in the hole, to erase you and your speech,

You did not realise the power of your words, how they made us annoyed,

We shall have been patient and understanding, instead of wanting you to vanish.

You were disturbing. What you said did not please us. So we wanted to kill you.

We preferred silence to challenge ; what you said was easier to ignore than to face.

We acted cowardly by refusing dialogue with you, by using violence to defend our universe.

You raised a voice which did not flatter our egos, but we should have listened to you.

We wanted you to disappear, but now we miss you.

We have understood, too late, that we needed you.

We realised that we had dug a hole in ourselves in which we had thrown you.

We wish we could fill it again… but it is impossible without you.

You are in the tough Egyptian man who accused us of being liers before giving us grain.

You are in his young interepreter, who resembles you so much when you were a child.

You are in all these anonymous faces, in which in vain we hope to see you.

You are everywhere. And you are nowhere. If we do not find you, we will go mad.

I am Joseph, the most powerful man of Egypt, but also the most vulnerable.

I was right to think you were looking for the weak point of the land, my brothers,

I am the weak point of the land. Behind my apparent power, a young boy is hidden, full of terror and confusion in a deep, dark hole.

You said you wanted to buy grain, but I saw you were searching for something else… or rather, someone else.

You were looking for me even before realising what you were missing.

The hole in which you had thrown me, without taking notice of my cries.

You wanted me to be swallowed by that hole, as if I had never existed ;

You hoped I would be silenced forever, so that you would never be challenged by a troublesome little brother.

I disappeared but the hole persisted in you.

The hole stayed in myself, dug there forever, now that my family, my world had disappeared.

I tried to forget. I became an Egyptian. Pharaoh changed my name. I married an Egyptian woman.

My first son’s name is oblivion, in the hope I would finally forget.

But I cannot forget.

Behind my Egyptian disguise, a young Hebrew boy screams for mercy to deaf, quarreling brothers.

You tried to suppress me because I was different from you, because we did not understand each other.

I cannot forget, however hard I try.

As soon as I saw you, I recognised you despite the passing of time. You had changed but you were still the same. The ones who wanted me to disappear. And now you were looking for me, but you did not even recognise me. In your hearts, I had become a hole, something missing, destroyed. I no more had face or voice, but had become a ghost haunting you in the darkness of your night.

You threw in my face all the memories I tried to hide in myself. I needed protection against the flow of horror and terror you were reviving in me. My elder son became a barrier, a filter, little interpreter who would smooth the painful sound of the Hebrew tongue by translating it into Egyptian, the tongue of the false identity I had built as a fence around the hole in me.

Then I heard your regrets. What had happened could have been avoided. It could have been repaired, provided you had all realised soon enough the gravity of what you were doing.

Can it still be reapaired ? I wish so. But I am not sure. I do not know. For now, the memories pouring out of my inner void are too hard to bear.

Joseph is not far, we feel his presence behind the drawbacks we face. They are the punishment for what we did to him.

We feel him, painful little ghost lost in the darkness, but we cannot see him. We cannot hear him. We have erased him and now he has become impalpable, the burning of regret carving a hole in our hearts.

I saw Benjamin, the only one in the family who has the same mother as me.

I would like him to stay with me. He was so young when I disappeared from his life that he has no memories of me. Our father must have told him who I was, how much he loved me. Benjamin may have missed me. My memories of him are not many. He may have feared the others, maybe they would harm him as they harmed me. I need to know him, to build with him what has been destroyed with the others.

Joseph… Was he really here ?

Joseph feels closer than ever, but we cannot find him yet.

Is there still hope ?

Probably not. Joseph is not anymore. He cannot be here. The feeling of his presence is a mere illusion. We know it, but we cannot stop hoping to find him again. Or at least to find peace.

We must try, again and again, to repair.