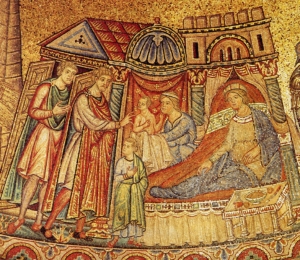 Asenath and the Amazing Technicolour Way We Can Re-envision Society

‘Tis the season… To listen to Joseph and the Amazing Technicolour Dreamcoat on repeat. We are knee-deep in the Joseph saga! But I can say with full confidence that Andrew Lloyd Weber missed a trick. He lost out on the great opportunity that is Asenath bat Potiphera. After all, what’s a musical without a proper love story?

I met Asenath because of a particular chip on my shoulder. When it comes to books, films, tv shows, etc, if there isn’t at least one fully-developed, compelling, well thought-out female character, I’m not interested. Parashat Mikketz does not pass this test. There is only one female character in the whole narrative, and all she gets is an off-hand mention: “Pharaoh gave Joseph the name Zaphenath-paneah; and he gave him Asenath daughter of Potiphera, priest of On, as a wife” (Genesis 44:45). My frustration led me down a research rabbit hole. I thought, the rabbis rarely let a side character slip by without giving them a story of their own. Perhaps Asenath did have a story somewhere?

It turns out, she does! In fact, she has several. In Rabbinic tradition, Asenath is the long lost daughter of Dinah (Jacob’s daughter, Joseph’s sister) and her rapist, Shechem. There are a few different versions of the story, but here’s the basic plot: Joseph’s brothers plot to kill the baby Asenath, “lest it be said that there is harlotry in the tents of Jacob.” Jacob rescues his granddaughter by putting a golden plate around her neck, inscribed with the story of her birth, and sending her away. The archangel Michael whisks Asenath to Egypt, where she is brought up in the house of Potiphera. Then, when it’s time for Joseph to find a suitable wife – tada! – there is Asenath, a nice, single Israelite girl.

Outside of Rabbinic literature, there is yet another Asenath narrative. An ancient romance/adventure novel, Joseph and Asenath (likely written in Greek, probably of Jewish origin, somewhere between the 1st and 5th centuries C.E.), gives Asenath’s narrative yet more substance. Asenath is a beautiful Egyptian priestess. She has a wardrobe to rival the infamous dreamcoat, and she lives in the highest room of the tallest tower of her father’s house. She is a sworn virgin who “despises men.” Then she meets Joseph and it’s love at first sight. Joseph won’t marry her because she isn’t Israelite, which prompts her to go through a dramatic conversion, including days of fasting and weeping on the floor, frenzied idol-smashing evocative of Abraham’s own conversion, as well as a visit from an angel who feeds her honeycomb that shoots out iridescent bees with diadems on them (you can’t make this up). Then, she marries Joseph.

As Lloyd Webber might say, “This could be a happy ending, perfect place to stop the show.” But, the story continues. Pharaoh’s son, who wanted to marry Asenath himself, tries to enlist Joseph’s brothers, Simeon and Levi (responsible for massacring Dinah’s rapist and his men) to help him kill Joseph and marry Asenath. They refuse. So Pharaoh recruits Dan and Gad, the sons of Bilhah and Zilpah (Jacob’s concubines). They agree. Along with Pharaoh’s men, they ambush Asenath along the road. Benjamin, who has been riding in the chariot with Asenath, injures Pharaoh’s son. Asenath prays to God and the swords of her attackers fall from their hands and are reduced to dust. Benjamin wants to finish off Pharaoh’s son, but Levi stays his hand. And THEN they all live happily ever after.

In both traditions, Asenath gets her own fairytale, a parallel to Joseph’s Cinderella story. However, what struck me was the ways in which both narratives are explicitly in dialogue with the story of the rape of Dinah (Genesis 34). Rabbinic tradition attempts to give Dinah a happy ending by means of her daughter, Asenath. And in Joseph and Asenath, the story of Dinah keeps rearing its head throughout the narrative: Pharaoh approaches Simeon and Levi specifically because of their role in the massacre after Dinah’s rape, and the threat of sexual violence for Asenath at the hands of Pharaoh is a major plot point.

Both stories, in their way, try to offer some healing and redemption to Dinah’s traumatic tale. Rabbinic tradition falls short – it’s not enough to tack on a happy ending to an ultimately horrific tale. Joseph and Asenath, on the other hand, suggests the possibility of individual and cultural change. The overarching message of the work is the rejection of violence for violence’s sake, and the novel offers Asenath a voice and a level of power that Dinah never had herself. Simeon and Levi show that they have grown since the massacre at Shechem, telling Pharaoh’s son, “We are men who worship God… How could we do anything so wicked in God’s eyes?” They pledge to defend Joseph. When Asenath faces Pharaoh’s son and his men, she raises her voice in fierce prayer: “Deliver me from these men!” God listens. Imagine, if God had listened to Dinah! Furthermore, God’s act of turning the mens’ swords to dust, rather than killing the men themselves, highlights the narrative’s distaste for a culture of violence. At the end of the story, Asenath is the one to offer an alternative to the culture of violence: one of compassion. She stands up for Dan and Gad when Joseph’s other brothers want to kill them: “Spare you brothers and do them no harm… You must not repay evil for evil to your neighbour.” Asenath is clear about what justice looks like for her, and the other characters take her lead. Dinah’s brothers decided what kind of “justice” she needed without even asking her, but Asenath holds the reins in her own story.

Joseph and Asenath offers a meaningful reflection on how we might tackle toxic masculinity and rape culture. It isn’t enough to punish those who perpetrate misogyny and sexual violence. We must envision a culture that completely shifts the paradigm: A culture where men can learn from their mistakes, say no to their own violence and stand up to other men who, whether physically violent or not, perpetuate a culture that enables gender-based violence. A culture where women, and those with other marginalised genders, speak and are heard. A culture where those who experience gender-based violence can be the architects of what justice looks like for them.  A culture where the default is compassion, as opposed to adversarialism. While Rabbinic tradition offers Dinah a neat fairytale ending via Asenath, Joseph and Asenath, in spite of its fairytale quality, teaches us that real happy endings take work. They are possible, but they rely on a shared commitment to learn and grow, to hold one another to account, and kindle our ability to imagine another possible world.