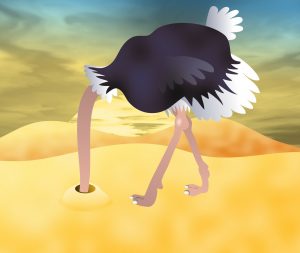 For a couple of years in the 1980s, I was employed as a medical officer in South London.  The work included sessions in a variety of child health clinics and schools, which meant that I had to travel between these locations, and inevitably spent a portion of each week sitting in traffic jams.  This allowed some time for reflection about the children and families I was trying to help, but also rather too much time staring at the backs of other vehicles or at advertisement hoardings.  One in particular struck me forcefully (although interestingly I can’t remember the precise picture or wording):  it was, I think,  a poster for a telephone company, showing  two birds with their heads in the sand  and a caption to the effect:  “I never phone my brother because my brother never phones me”.

Why did this image so resonate with me?  Apart from the fact that in those days I was a very reluctant user of telephones, it seemed to me to sum up in very few words how easily communication can break down between friends or within families.  Even when the underlying relationship is reasonable, all it needs is a misunderstanding, or too much else to do, an unrelated incident which delays the letter or phone call, perhaps a sense of grievance that stops us being the one to take initiative, that prevents us from seeing any other perspective on the situation than our own … and there we have a recipe for estrangement and mutual resentment. And yet all it would take to begin to repair the situation is that initial phone call or message or apology.

Now suppose the family dynamic is not so healthy:  a parent so caught up in their own issues that they fail to pay attention to what is happening to the children.  No-one sets boundaries for the younger child who provokes his siblings until they become abusive to him and come close to killing him…  and the parent doesn’t stop them…

The focus of Parashat Mikketz is often on Pharaoh’s dreams and the upturn in the fortunes of Joseph.  His shrewd interpretation and advice lead to his elevation from imprisoned slave to vice-regent of Egypt, so that by the time the predicted famine takes hold, he is in a powerful position, able to make a real difference – including in due course saving his own family. And yet a number of commentators have drawn attention to one of the things the text does not say, namely:  why in all his years in Egypt did Joseph never communicate with his father Jacob to let him know that he was alive and thriving?

We read in the previous parashah of Jacob’s distraught cry when he believed Joseph to be dead, and how he went into prolonged mourning.  “Vayema’en lehitnachem – he refused to be consoled” (Genesis 37, 33-35) and effectively gave up on life and on the remaining members of his family.

Ramban (Nachmanides), the 13th century Spanish commentator suggests that although Joseph’s lack of communication was wrong, he was biding his time until he could fulfil the prophecy of his own childhood dream and see all his family at his feet.

Personally, I am much more persuaded by some of the more recent reflections on this topic from across the Jewish world, which speculate on other possibilities of what may have been going on in Joseph’s mind, informed less by a sense of divinely ordained destiny than by an understanding of dysfunctional families.  According to some of these, even as an immature and rather arrogant young man, Joseph must have realised that his dreams had made his brothers dangerously jealous, and that his father was aware of this.

So what prompted Jacob to send Joseph – alone and unprotected – to ‘report’ on the brothers?  Did Joseph, at the bottom of the pit into which they threw him, perhaps believe that his father knew what was going on and may even have approved? Once he settled into Potiphar’s household and his intelligence and skills were appreciated, did he start to feel that he had a brighter future even in slavery than back at home?  Is that why the adult Joseph names his first son Manasseh “ki nashani Elohim… – God has allowed me to forget all the troubles I endured in my father’s house” (Genesis 41, 51)?

Joseph himself is eventually able to forgive his brothers and to reassure them that it was all part of the divine plan:  “God intended it for good, in order to accomplish what is now the case, to keep alive a numerous people…”  (Genesis 50, 20).  Yet how many years of distress and resentment might have been prevented by better communication?

As we approach the end of the book of Genesis and its account of our people’s dysfunctional founding family, as well as the end of the secular year, it is time for each of us to try to see beyond our own narrow perspective, to let go of hurt which may not even have been intended, and to resolve to communicate when we can.