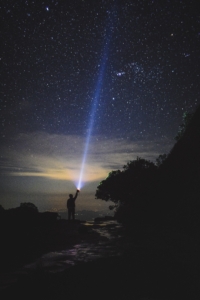 In Rabbinic tradition, “All dreams follow the mouth [of the interpreter]” (Berakhot 55b). That is, the meaning of a dream is determined by how we interpret it.

In Parashat Mikketz, Pharaoh has two dreams: seven sickly cows consume seven healthy ones; seven wilted ears of corn consume seven healthy ones. He wakes up disturbed. He summons his magicians and sages, but none of them can interpret his dreams. Pharaoh’s cupbearer tells him about Joseph, whom he had met in jail and who had correctly interpreted his dream. In haste, Pharaoh summons Joseph. Joseph predicts 7 years of plenty and 7 years of famine in Egypt. He adds that Pharaoh should appoint somebody to supervise the gathering of rations during the first 7 years, and manage their distribution during the second 7 years. (It’s no surprise that Pharaoh ends up picking Joseph.)

Joseph claims that his dreams and their interpretations come from God, not from him. In this world view, dreams seal the fate of Egypt. They sealed the fate of the cupbearer (who was pardoned) and the fate of the baker (who was executed). And they sealed his own fate. Joseph believes that his dreams are deterministic, and thus he acts as though he has no power over his own life. He believes the same for others – that dreams sweep us away without our consent, and therefore we have no say in how our lives will unfold. This is a comfortable idea for a person who wants to justify his sense of superiority over his brothers and his seizure of power in Egypt. It is also a comfortable idea for a person who wants to make sense of his abuse at the hands of his brothers, the workplace sexual harassment he endures at the hands of his employer’s wife and his time in prison. Dreams offer Joseph solace when he suffers, but they also rob him of his sense of agency. Furthermore, they release him from the responsibility for his own actions. They give him permission to enact psychological and emotional torture on his brothers.

The Rabbis do not permit such a disempowered attitude towards dreams. “All dreams follow the mouth [of the interpreter]” (Berakhot 55b). They never assume that dreams don’t have any power, but they do not consider that power absolute. A dream is only one sixtieth of prophecy (Berakhot 57b). That means the other 59 sixtieths belong to us. Our dreams mean what we say they mean. In other words, we can learn a great deal about ourselves and our lives from dreams. This is true whether one thinks of a dream as a direct line from God, a message from the spirit world, a useful aid in psychoanalysis, a way of processing our waking lives or simply jumbled nonsense. Dreams are texts. Through engaging with them, just as we might engage with a painting, a poem or a page of Talmud, we can uncover wisdom. But, ultimately, we have a responsibility for this wisdom. Our dreams do not control us, any more than any other text controls us. We determine what a dream means.

Joseph’s dream interpretations do come true. But, he absolves himself of any responsibility for them. On the one hand, his dreams offer him hope in his darkest times. On the other, he rises to power by passing off his appointment to the second-highest office in Egypt as the will of God. Furthermore, he believes, as well, that his tyranny over his brothers is not only heavenly sanctioned, but also inevitable. It is important for us to have things that give us strength when we are going through difficult times. For Joseph, his dreams serve this purpose. Would he have survived being thrown into a pit, being sold into slavery, serving time in prison for a crime he didn’t commit, without being able to cling to his dreams? However, we must not use our understanding of God’s will – whether via dream, sacred text, or the word of our religious teachers – to sublimate our own will or to justify our unethical behaviour.