How can you condone slavery? 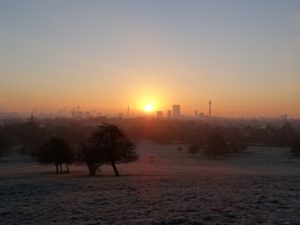 Around this time last year, I overheard a conversation.

Two women met each other early in the morning on a frosty hill overlooking the city. One had arrived slightly earlier than the other, draped in a long, white scarf. She was old but full of life in a way that made her impossible to place. The other joined her not long after. Her blue velvet dress and jewellery would have looked gaudy on somebody else, but somehow on her they were elegant. They sat down on a bench, facing downhill.

At first, they sat in silence, watching the sun rise higher in the sky. Then the lady in blue velvet turned to her friend and said: “You know, I believe in slavery.”

Her friend let out an exhausted sigh. Even though I couldn’t see her face, I could feel her roll her eyes. “Yes,” she said, “you’ve told me before.”

“Not cruel slavery,” she insisted. “I’d put limits on it. Seven years. Seven years is enough and then the slave goes free. And the masters have to take care of them properly.”

“I wish you wouldn’t say that.”

“I’m not asking you to change. I just wish you’d realise that times have moved on. You can’t say things like that anymore.”

“Why not? If I thought it once, why should I be forced to change my mind?”

“Because you’re respected. People care what you have to say. They want you to say loving, hopeful things. If you tell everyone you believe in slavery, people will think that it’s OK.”

“But most of the time I do say nice things. And I’m coming from a good place. I want slaves to be treated well. I want them to have good lives.”

“But you still believe in slavery.”

“Yes, I still believe in slavery.”

“You know,” her friend nudged her, “I want to reinterpret what you’re saying. I want to think you’re speaking in a spiritual sense. I want to hear what you’re saying as that we should all be slaves to God. After all, God is our creator and provides for all our needs, and in turn we do God’s work on earth.”

The old lady laughed. “I like that, I like that a lot,” she chuckled… “But, you know, that’s not what I said.”

“And you can interpret me any way you like, and I’ll accept what you’ve got to say, but nothing I say can depart from its original meaning.”

“Even now?” Her friend was exasperated. “Centuries after the abolition of slavery? Centuries after my ancestors fled Egypt? Even now, knowing everything you do about human history and human dignity, you can’t change just a bit?”

“Sure, I change, in my own way. But the core of me is still there. Like it or not, you’re stuck with me.”

They sat in silence a while longer. I could feel them both seething. A flock of birds murmured in the winter sky. I felt almost rude for eavesdropping, but couldn’t pull myself away.

This time, it was the woman in velvet’s turn to get frustrated: “You knew I would say this. You knew that if you came here, on this morning, at this time, you would hear me say these words. I believe in slavery. I say them at exactly this time every year. If you don’t want to hear me say it, then why do you even come?”

“Because I love you, Torah!” She threw her arms up in the air.

“I love you too, Kehillah,” Torah whispered back.

At once, I realised that I was not listening to any ordinary conversation between two people but the endless dialogue between the Jews and Torah. Torah, on the one hand, was fixed. She had been inscribed centuries ago and would continue to speak the words she always had. The Jews, on the other hand, had grown with history. Their thoughts had developed as God had revealed to them new insights about how to treat people.

They were locked in dialogue. One would always change and the other would always stay the same. But neither could leave each other. Sure, the Jews could get up and leave Torah at any time. Torah could even abandon the Jews. But if either of them walked away from the relationship, Torah would cease to be Torah and the Jews would cease to be Jews. Through their discussions, they drew out all of God’s contradictions: the contradiction between the past and present, between love and justice, between the world as it is and the world as it ought to be.

Kehillah got ready to leave. Torah gently held her wrist. “You will come back and visit me, won’t you?” she asked. “I know I’m old and sometimes I say offensive things, but I still want to talk with you. You don’t have to do everything I say. Just sit with me and listen. I’m lonely without you.”

Kehillah sat back down. “Of course I will, Torah, I’ll be here every week. I love you and I need you. I’m lonely without you too. If I don’t come here and have these conversations with you, I’ll forget what my purpose is. I’ll forget that I have work on this earth to do. You ground me.”