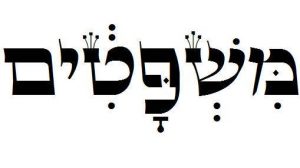 This week’s Torah portion is Mishpatim which can be translated as “laws” or “judgements”. In fact, it is crammed with so many commandments that some scholars have nicknamed it ‘The Book of the Covenant’ – the continuation of the covenant, as expressed through the Ten Commandants, which the Israelites received in the Torah portion immediately preceding Mishpatim.

Many of the laws contained within it concern human responsibility and deal with a range of issues including employment, property and the treatment of animals to name a few. Of the 53 Mitzvot found in Mishpatim, there are three that I find particularly interesting:

The ‘striking’ content of these verses might encourage us to ask one of several questions: Why are these three commandments grouped together? What is the relationship between the two outer laws concerning parents and the middle law about kidnapping? Why does both striking and insulting one’s parent result in the death penalty? To understand what is going on here we must first examine each commandment individually.

“One who strikes one’s father or mother shall be put to death”. This law, which only pertains to one’s parents, is significantly more stringent than that concerning one who strikes a friend or neighbour. In these cases, the assailant is required only to pay the victim monetary compensation for time off work and towards their medical bills. While the sentence of death is extreme by comparison, rabbinic law seeks to ensure that it is only rarely enforced. It does so by inserting numerous conditions and qualifications to the law which make it unlikely to ever be enforced. For example, any blow must leave a bruise and the attack must be seen by witnesses. As the key witness would most likely be the victim (i.e. the parent), and it is rare that a parent would testify against their own child in court knowing that the penalty would be death, it is almost certain that such punishments were rarely meted out.

While we might be able to understand a society that would charge those guilty of physically attacking their parents with death, applying that same penalty to those guilty of cursing their parents seems surprising and, indeed, excessive. The Rabbis do little to ease our confusion with the method of execution they assign to each transgression. The Talmud – the central text of Rabbinic Judaism – discusses four different methods of execution. These are, from most severe to least, stoning, burning, beheading and strangulation. For striking one’s parent the method of execution is strangulation while one who curses their parent is put to death by stoning. Counter-intuitively, they judge that cursing one’s parents requires a more brutal execution than striking. Why should this be the case? What higher purpose did the Rabbis have in mind? Rambam, the 12th century Sephardic scholar, suggests that, as the sin of cursing was more common than striking, it requires a more severe punishment. Just like, “a fool when he becomes angry, he shall rage and curse against his King”. Simply put, though one is usually able to restrain oneself from physically striking a parent, the same cannot be said for cursing them. In the heat of the moment it is all too easy for one to lose one’s temper with a loved one. Swearing at a parent takes just a moment of rage, with no premeditation and no physical force. For this reason a more severe punishment is necessary; “the more common the occurrence the greater the punishment that is required” in order to be an effective deterrent. Here again, as with all cases that might end with the death penalty, the Rabbis go to great lengths to minimise the chances of it being implemented.

Our final law, awkwardly sandwiched between the above two laws concerning parents, tells us that, “One who kidnaps a person […] shall be put to death”. Like striking one’s parent, the punishment here is strangulation. Rav Saadiah Gaon, writing in the 9th and 10th century, gives a rather convoluted reason for this insertion. He suggests that in the majority of kidnapping cases the victim is a young child. Such children, he explains, grow up in a different place, unaware of their parent’s identity so that it may happen that such a child will grow up to strike or curse their parent unintentionally. Rav Saadiah concludes that for this reason, “it is fitting to punish the kidnapper with the death penalty”. Alternatively, these three transgressions could have been placed together in order to emphasis or contrast their severity to one another. In other words, the punishment assigned to the kidnapper is presented in order to give us, the reader, the correct sense of proportionality; to highlight how important it is not to disrespect our parents either physically and, especially, verbally.

On a macro level all the laws contained within Mishpatim might be understood as underlaying the centrality of a social and legal contract in a just society. This means we can take each verse on its own merit or all as one large code. Taken as a whole they spell out the complexity and richness of human relationships and the boundaries necessary for civilised existence. We may never manage to reveal the exact logic governing the system of law laid out in Mishpatim, yet it is the wondering and wrestling with these words that continue to breathe life into Torah.