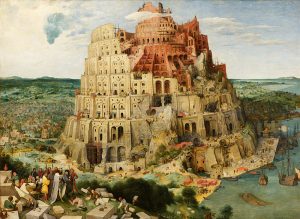 The Torah portion that we read this Shabbat is a well-known story, frequently portrayed in and influential on art and literature, from Pieter Brueghel’s painting in the sixteenth century to Douglas Adams’ babel fish, the ‘small, yellow, leech-like creatures’ that wriggle into your ears and perform instant translations in The Hitchhiker’s Guide to the Galaxy. At face value, it is an explanation as to why we speak different languages – an etiological tale – albeit it not a linguistically viable one.

The normative Jewish perception of this narrative is that the people conspired against God, building a tower to infiltrate heaven so that they may dwell there, engage in idol worship and wage a war on God.

These ideas are laid out in Sanhedrin 109a, in which Rabbi Yochanan argues that ‘the atmosphere of the tower causes forgetfulness’. It is this that the rabbis of the midrash use to shift the moral message of the story away from warmongering toward our forgetfulness in prioritising our lives:

Rabbi Phineas said: There were no stones there with which to build the city and the tower. What did they do? They baked bricks and burnt them like a builder [would do], until they built it seven mils high, and it had ascents on its east and west. [The labourers] who took up the bricks went up on the eastern [ascent], and those who descended went down on the western [descent]. If a man fell and died they paid no heed to him, but if a brick fell they sat down and wept, and said: Woe is us! when will another one come in its stead? And Abraham, son of Terah, passed by, and saw them building the city and the tower, and he cursed them in the name of God, as it is said, “Swallow up, O God, divide their language”. (Pirkei DeRabbi Eliezer 24)

‘If a man fell and died they paid no heed to him, but if a brick fell they sat down and wept’.

We barely need to glance at the news to see a plethora of stories about how businesses and individuals pay more heed to their falling bricks than the lives damaged by their actions. The recent collapse of Thomas Cook, where the company’s last three chief executives were paid £35m between them in the 12 years prior, is just one example.

Yet there is a long Jewish history of business ethics, deeply entrenched in our texts and our history. The Holiness Code – a section of Leviticus packed with rules and the repetition of the word kodesh, holy – includes the commandments not to defraud or rob your neighbour, linking this to withholding wages from a hired labourer. This is echoed in Deuteronomy too, and in the Talmud. The Eshet Chayil is renowned for her business skills, and the honourable way she practises.

We have also the idea of Pikuach nefesh, the preservation of life. It is meant to take precedence over other mitzvot; we are commanded in the Shulchan Aruch to break Shabbat to safeguard the health of ourselves and others. And yet so often we see that those around us – individually, communally and societally – put their pride, their profits and their public image before the people involved.

In building families, friends and communities as well as businesses it is easy to overlook the impact on the individual and to focus only on the goal. We write and send  ‘get-well-soon’ flowers, ‘congratulations’ cards, birthday presents and promises to “see each other soon” and “be in touch”, but how often do we actually carve out time to spend with each other?

Community leaders often mark the successes of our services by how many congregants show up, but do we stop to wonder why people are here – and why they’re not? How often do we ask and answer the question “How are you?” with an “I’m fine” without either giving or wanting to hear a real response?

The problem with the Tower of Babel was not that they could all communicate, but that they weren’t doing so enough. They didn’t prioritise each other in their actions, and by not valuing each other, not communicating properly with each other, we lose our ability to do so at all.