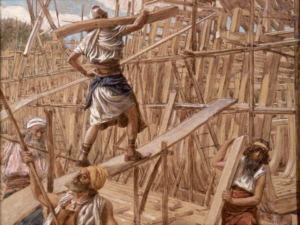 For as long as I can remember, I have loved the story of the flood, and of Noah’s Ark. Perhaps it is as much to do with the drama of it all as much as it is the message of one man’s fight against a world he could not control. Perhaps it is the problematic elements of the story and the questions; how might a 600-year-old man build an ark of such a size? Would the animals really come two-by-two? Why would God, the omniscient, omnipresent, omnipotent, need to undo what had been done in Genesis 1 in response to the failures of subsequent generations? Whatever the reason, every year I find new ways to think about the text in the parashah, and whilst there are myriad ways in which the story of Noah, Noah’s character, and his actions have been interpreted, in light of what is going on in the world with COVID-19, I am yet again drawn to thinking about Noah in a new way.

In Genesis 6:9, we learn that “Noah was a just man, and perfect in his generations”, and Rabbi Yochanan taught that, despite being considered righteous in his own generation, he would not have been seen as so in others. I rather like the imagery that Rabbi Haninah conjures up when expounding on this and he compares Noah to a barrel of wine lying in a vault of acid; where it is, the wine is fragrant, elsewhere maybe not so much at all (Babylonian Talmud Sanhedrin 108a).

For many years thus, I have subscribed to the interpretation that Noah was not really that much of a righteous man; he essentially thought only of himself, and did not take the opportunity to intervene on behalf of the people around him when God told him that the flood would be sent, destroying the entire world and everything in it. Later in the Book of Genesis we will read about how Abraham stands up to God, attempting to prevent the destruction of human life – what was it that prevented Noah from doing the same? The Lubavitcher Rebbe taught that Noah tried to save his generation by calling on them to repent, but he did not pray for them, implying that ultimately it did not matter to him what became of them when the flood arrived. One might therefore infer that had Noah truly cared, deep down, then ‘doing his best’ would not have sufficed him. Noah’s efforts, and his involvement with others, were seemingly limited to his sense of what he ought to do for them rather than a true humanitarian concern for their well-being. Consequently, when the flood came 120 years after Noah had begun to build the ark, he and his family entered it alone with only animals for company. Our sages taught that “words that come from the heart enter the heart”, and therefore deep down a person will always sense whether you truly have their best interests at heart, or if you are fulfilling a need of your own: if your work to help somebody is rooted in a desire to do the right thing, but you have no real interest in the result, your actions will be met with scant response – is this really the best way we can think about Noah?

Reading in 2020 about Noah, the ark, and the destruction of the world feels slightly different. We are living in an age where the mainstream is finally recognising that mental health and physical health have parity in importance, and very often affect one another. Moreover, this is an era in which it is becoming more and more acceptable to put a focus on self-care, and we are reminded therefore that sometimes the only person we can save is ourselves – and that’s okay!

I am starting to think that maybe I owe Noah an apology, I have a new-found empathy for him and his plight. Having been effectively bound up since March in an ‘ark ‘of my own, weathering the storm and waiting for the ‘waters’ to recede, I know that beyond maintaining physical distance and wearing a mask, there isn’t going to be much else that I personally can do to hasten the end of the catastrophe. Indeed the strength and resilience it has taken so many of us to sail on a sea of unending uncertainty is much greater than I might have ever realised.

Additionally, we keep hearing this over-used adage that asks us to remember that “we’re all in the same boat” – we are, I would posit, in fact not in the same boat at all. We’re all surviving the same storm, but each of us has our own personal teivah to sail.

So reading Parashat Noach this year I find myself looking at Noah with new eyes; just as we are, he held out for the future for months on end with no real knowledge of when or how that future would arrive. Perhaps this year, Noah has especially taught me that I need to re-evaluate how I understand righteousness, and what it means to be righteous in a world that is adrift.