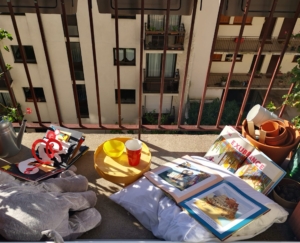 A few days ago, my 5 year old daughter and I were still frequently sitting on cushions on our balcony to read books.

Among her favourites displayed in front of us was a book by the illustrator Anthony Browne called “Willy’s Pictures”, about a chimpanzee boy. In this book, Anthony Browne diverts from the great classics of painting by introducing characters bearing the features of chimpanzees and gorillas. Botticelli’s “Birth of Venus” becomes, for example, a gorilla who takes a shower and bears the title “cover yourself”.

Anthony Browne tries to suggest to us both in a tender and humorous tone the sometimes offbeat readings of a child who projects into artworks what is close to him/her. Here his character, Willy, is a primate, the characters he imagines in the paintings therefore bear, like him, the features of primates.

Right next to this ape-like “Birth of Venus”, another page resumed, through a sand castle, “the Tower of Babel”, painted in 1563 by Bruegel the Elder. And it is while thinking back together of the sand castles that we built on the beach, my daughter and I, taking them for Towers of Babel as well, that I began to think about the biblical text.

In the biblical account of the Tower of Babel, it is said that human beings walked from “the east”[1] (kedem). Which in Hebrew also means “origin”. And it is precisely with this original idea that they choose to break two verses later by “making a name for themselves”[2]. Because at first glance, a name is something that is transmitted to us and not that “we make for ourselves”. A received name is the emanation of a precedence.

This name is also the emanation of an otherness. In French for instance, to say our name we usually say “je m’appelle X”, translated very literally ‘I’m calling myself X’. In Hebrew, on the contrary, we only say “They call me X” (Korim li).

This name represents something which, as the Hebrew language suggests to us, we cannot give to ourselves: the life transmitted by the Other, by parents who name us or by God who in creating the world names what He/She creates.

Still in Hebrew, the word “name” (shem) can also be read “over there” (sham) and thus suggests that it is always from somewhere else that someone is called. But strangely, the story of the Tower of Babel derogates from this rule and “the builders” here called themselves. This idea that an “other” who would be “there” and which makes a name necessary to be able to be called no longer exists by naming themselves alone. While the meaning of a name is to make us tend towards an Other, by naming themselves, the “builders” cut themselves off from this necessity of the Other which is necessary to project themselves in language. They do not create a name for themselves in order to “be called.”

By cutting themselves off from their “origin”, from their “east” as the biblical text tells us metaphorically, they are both “here” and “there” in the same time.  By silencing in this way everything that has to do with their origin, they can no longer be projected into a different time or space in language as they can no longer consider otherness. There is an absolute desire for self-control, like an archer who cannot bear to shoot his arrow.

In the original painting “The Tower of Babel”, Bruegel the Elder indicates, through a classic picture of its style in which the characters and the details abound, that the Tower already carries within it, from its foundations, the signs of its instability. Some foundation walls have collapsed or are still under construction although they support several floors.

The entire tower appears to be built on sloping ground which gives the impression that the whole building is tilting. The whole tower is inspired by the Colosseum in Rome but while the arches of the Colosseum support the upper floor, the arches of the Tower support absolutely nothing! Everything in this building, up to the floors of the tower where the walls are gutted, emphasizes the fragility of the building! And for those who are attentive enough, the painting already carries with it signs of the continuation of the story.

This track questions the idea of ​​the dispersion of the “builders” of the Tower of Babel, the theological doctrine of ​​the “punishment” of a jealous God and leaves the possibility of a relation of cause and consequences. This theological ambiguity in biblical discourses is itself contained in the root of the word Ekeiv in Hebrew which is sometimes translated by “retribution”, sometimes by “consequence”.

The failure of the construction of the Tower owes less here to the idea of ​​a divine punishment than to a logical consequence of things: if the project collapses, it is in reality due to weak foundations, an “ anteriority ”made shaky to the motive says the biblical text to“ make a name for themselves ” in the name of the exercise of their free choice.

The dispersion of the builders of Babel therefore becomes a logical consequence. Cut off from their anteriority, they are also cut off from their ability to consider the Other and we can go so far as to see in the multiplication of languages ​​a vital need fulfilled by God to confront someone who becomes Other in expressing themselves in a different language.

A linguistic distance has been created, an encounter is possible, an Other than oneself now exists.

God does not chastise the builders by dispersing them but fulfills their need for encountering the Other by multiplying their languages.

My daughter had abandoned Anthony Browen’s book and I was now alone in front of this page. On the glossy paper, a little monkey was jubilant as it hopped around this tower whose arches seemed to smile. The tragedy of Bruegel’s swarming work was diverted by Anthony Browne and the gaze of the character of Willy the little monkey: his Tower of Babel was jovial and stable.