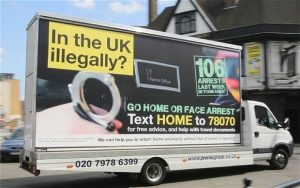 “My mum has been deported.”

“I want to stay in this country after I finish studying, but the government won’t let me.”

“If they send my wife back, I don’t know what will happen to our children.”

These are all sentences I have heard in the last few months. Some from Jews. Some from non-Jews. All from people I never imagined would have to go through such trauma.

At first, these stories felt like anomalous tragedies. Now, I have begun to hear so many stories of visa and migration problems that I can’t dismiss them as individual instances. A government policy is underway, and it scares me.

In 2012, in a speech to the Conservative Party conference, then-Home Secretary Theresa May promised “a really hostile environment for illegal immigrants.” The following year, she sent out a fleet of vans around the suburbs of London, directing illegal immigrants to “Go home or face arrest.”

As prime minister, May has strengthened and extended that ‘hostile environment’ policy. Commonwealth citizens, students, people on marriage visas, immigrants who have been here for over 50 years – all have felt the blunt force of the UK’s strict border policy. There are, inevitably, fears that this will soon come to affect EU nationals.

Perhaps I should not be so alarmed. The UK’s strict controls over immigrations are over a century old. In 1905, Parliament first passed a law placing restrictions on who could come into the country, dubbed ‘the Aliens Act’, whose express intention was to stop migration of Jews from eastern Europe. The parliamentary debate called Jewish immigrants “dirty, destitute, diseased, verminous and criminal.”

For as long as I have been alive, successive governments have promised to get tough on immigration. Tony Blair boasted about doubling immigration officers, increasing raids, clamping down on migration and turning away asylum seekers. Gordon Brown famously pledged “British jobs for British workers.” David Cameron called the refugees at Calais “a bunch of migrants.” During Ed Miliband’s election campaign, he brandished red mugs with his top five election promise: “Controls on immigration.”

Until recently, however, the UK’s hostility to immigrants had felt like low background noise. It was like the buzz of a dodgy lightbulb in a house I’d always lived in, humming away almost imperceptibly. Now, that noise has become a din. It has gone from being an irritant to a major problem, affecting people I care about deeply. And I am scared.

Beyond the fear I feel for those who are affected by this, what worries me most is the attitude that is seeping into our society. Underpinning all this anti-immigrant action is a pernicious culture. Fear of difference. Hatred of others. Desire for homogeneity. A striving for monoculture. A reactionary and regressive drive to return to a mythical, ethnically-pure past.

Our Torah portion has much to say on this issue. In the beginning, Genesis tells us, the whole world was of one language and of one speech. The people gathered together in fear: “let us make for ourselves a name, lest we be scattered abroad upon the face of the earth.” A homogenous, fearing society, they decide to build a tower reaching up to Heaven to challenge even God. Out of this culture emerged an attitude where human life no longer mattered. Pregnant women were forced to do hard labour. If a person fell and died they paid no attention, but if a brick fell they sat and wept, saying, ‘Woe upon us! Where will we get another to replace it?’

In response, God recognises that there is only one solution: “let us go down, and confuse their language, so that they may not understand each other.” When the people no longer understood each other, they could no longer exploit each other. They gave up their meaningless work. The antidote to tyranny is diversity.

While Babel may initially have seemed like a curse, it became a blessing. The bedrock of our civilisation is its diversity. Because of the scattered peoples of the earth and its variant languages, we have been given many gifts. We have the Diaspora. We have a world full of incredible cultures. We have Jews spread out across the world, spreading our vision of ethical monotheism. We have the joy of learning to communicate across all these barriers. What diversity of peoples means is that nobody can exploit another without first learning to understand them. We have to really speak to each other. And, when we do, we find in each other that great spark of divinity that guards us against oppression.

What is happening in Britain today feels like Babel in reverse. All my life, I have known this island as one teeming with diversity. I have come to meet people from every different language, religion and background. It has not been perfect. It has not been easy. But the fact that it isn’t easy is what makes it so wonderful. We learn from each other and try to understand each other. We all muck in together to build a country that works for everyone.

In this ‘hostile environment’, people are turning to each other in fear. The undertones of oppression and exploitation are becoming explicit. We are building our own tower: a monolith that refuses human compassion. It should be a source of concern to all of us.

Solutions are not forthcoming from the political parties. The Conservatives are dead set on their agenda. During their recent party conference, Diane Abbott told delegates: “Real border security – to stop drug traffickers, sex traffickers, gangsters and terrorists – that is what Labour stands for.” What made Abbott’s speech most disappointing was that, up until this point, she had been one of very few politicians to resist such rhetoric. It seems our politicians genuinely believe that the public are committed to their programme of fortifying the borders.

We must challenge their narrative. It is not too late to turn back. Babel granted us the gift of communication. I cannot be alone in having heard so many stories of problems with migration and borders. We need to tell each other those stories. We need to share our own family histories. We need to discuss our anxieties about what kind of country can be created out of fear.

We can challenge that fear with the greatest tool we have at our disposal: love. Babel created strangers and gave us the opportunity to love them. It turned us into strangers. Our Torah teaches us that we know the heart of the stranger. Not the pain or the suffering or the struggle. But the beating, loving, creative heart of somebody who has to move from one country to another and strives to make the best of it. With love, we can defeat fear. With hope, we can end this hostile environment.