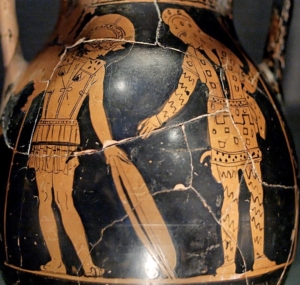 The Greek Diomedes and the Trojan Glaucus are poised for mortal combat in Book 6 of the Iliad when Diomedes realises their grandfathers had met. “They gave each other fine gifts of guest-friendship… a belt bright with scarlet… and … a two-handled cup of gold… Let us shun one another’s spears… and exchange armour,” he says – and they do, two warriors taking each other’s hands on the battlefield.

Guest-friendship, this powerful bonding mechanism between the Homeric elites, is generally marked, as here, by gift-giving. And it’s not just guest-friendship that is accompanied by vividly depicted objects. We hear of the gifts Agamemnon sends in a failed attempt to propitiate his sulking star fighter Achilles: “seven tripods untouched by fire, ten talents of gold, twenty gleaming cauldrons, twelve strong prize-winning horses… and … seven women skilled in noble handiwork”, and at the climax of the poem, Trojan King Priam seeks out the man who killed his son with a ransom of “twelve sumptuous robes, twelve single-folded cloaks, as many coverlets and as many white mantles and as many tunics as well… ten full talents of gold, and two gleaming tripods and four cauldrons, and a beautiful cup… a great treasure”.

The German-Jewish scholar Erich Auerbach began his 1940s magnum opus “Mimesis: The Representation of Reality in Western Literature” with a chapter comparing the world building of the Iliad and Odyssey with that of the Hebrew Bible. For Auerbach, the Homeric epics are characterised by an impulse towards an “externalization of phenomena in terms perceptible to the sense” – an overwhelming preoccupation with, and delight in, physicality for its own sake. But this interpretation is given as distinguishing these texts from the relatively patchy and disjointed description of the Binding of Isaac, which Auerbach takes as his Biblical example. But what if he had taken Pekudei this week’s parashah?

Pekudei constitutes the final instalment of Shemot, 13 of whose 40 chapters are almost entirely concerned with the Mishkan. The portable sanctuary’s dimensions and accoutrements, the clothing of its priests and the rituals for their investiture – all are described in meticulous, exhaustive detail – the physicality of these passages is almost bewildering. In its specifications of precious metals and other materials, fabrics and garments and artefacts we might find ourselves resorting to Auerbach’s representation of Homeric “externalization of phenomena in terms perceptible to the sense”.

But these Biblical chapters resonate with the Homeric examples not simply because they share a predilection for lavishly visualised lists enumerating ancient valuables, but because in both cases, the evident importance of these physical objects itself draws our inquiring attention, in each case, to the nature of that importance.

In the Homeric epics, physical gifts seem to be not merely symbols of relationships between humans but the very means of establishing and perpetuating those relationships. In Shemot we are also dealing with a category of gift – Terumah – that acts to solidify a relationship into existence. Both draw on a basic dimension of experience – the physicality at the heart of relationships; the starkly materialised nature of what it means to interact as a human.

But the relationship of Pekudei is more complex than Homeric human-to-human guest-friendship or power struggles. It deals, rather, with Judaism’s central triangulation between individual, community and God.

The previous week’s parashah Ṿayakhel, in non-leap years read together with Pekudei, describes how “kôl n’dʰīv lēv” (anyone generous of heart) brought this offering for God. But all this bounty offered by individuals is put to use in the creation of the physical vessel for the relationship between the community and God. Perhaps this is why Pekudei mentions the census as a brief aside from the inventory of materials used for building the Mishkan – as though the Children of Israel themselves are the building materials.

And whereas Homeric gifts are described in terms of their appearance or their history – who made or previously owned them – much of the content around the Mishkan has the future-facing quality of instructions, an exacting precision not relevant to Homeric gift illustration. But if the Mishkan’s physicality and dominance in Shemot is a relational phenomenon, it is also something of a conundrum. Or, perhaps, an overcompensation. Because there’s a paradox in the physical manifestation of a relationship, one party of which is cannot be stably embodied in the human world. Diomedes is keen to verify Glaucus’ identity because he wants to make sure he’s not accidentally about to fight a god – Homeric gods, often wandering around Earth barely distinguishable from humans, offer a clear contrast to a nebulous, faceless Divine Presence.

This prominence of the Mishkan is partly due to repetition – the lengthy word-for-word parallels to be found between Chapter 25 and 37, 28 and 39, as God’s directions to Moshe on Mount Sinai are faithfully executed on the ground. But instruction and construction do not follow seamlessly on from one another – they are rent asunder by the violence of the God’s threat to destroy the people as punishment for the Golden Calf, averted by Moshe’s intercession. After this, the Mishkan construction could also be read as re-construction – of the relationship between God and the Children of Israel.

Just as for Glaucus and Diomedes, the threat of physical violence is transformed by physical generosity. It would seem that human interactions – even with the Divine – take place in a physical world and have the capacity to be dangerous, brutal and violent. The Iliad knew that. The Torah knows that. We today are horrified to realise how true that still is. But Pekudei reminds us that, quite distinct from materialism, there is a sacred materiality – sometimes, with the right purity of heart, the beauty and profundity of relationships, and even their power to heal, to act as an antidote to violence, can also be manifested in the physical realm. As individuals, as communities, it is for this power that we pray.