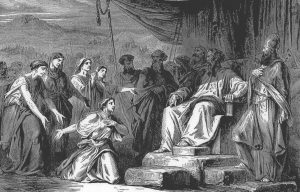 At the beginning of this week’s parashah, God awards Pinchas, son of Elazar the Priest, a ‘covenant of peace’ (Num. 25.12). This is rather ironic, given that Pinchas has literally just committed one of the most despicable acts of violence in the Torah. Seeing Zimri (a Shimonite) taking Cozbi (a Midianite woman) into the Tent of Meeting to have sex with her, Pinchas takes the law into his own hands, and kills them together with one spear. This is clearly a disgusting act of extra-judicial murder, and there are many who feel deeply uncomfortable about reading these words in a weekly Torah portion. But, it is by coming to terms with these texts of terror that we can begin to deal with their terrifying consequences. This may mean not simply reading such narratives on their own, but looking to ways in which they have been read and interpreted in different times.

In the biblical text, Pinchas is rewarded for his zealotry. In a brilliant course taught by Dr Laliv Clenman last term, the fourth years at Leo Baeck studied the issue of intermarriage in biblical sources and their interpretation in rabbinic literature.  We discovered that the rabbis of the Talmud and Midrash are much less enthusiastic about what Pinchas did than the Bible appears to be. Although they cannot condemn something that God has rewarded, the rabbis make sure that they do not turn Pinchas’ example into one that their readers will follow in their own context. Commenting on this ‘covenant of peace’, the authors of the Midrash take what I think is a sarcastic tone: ‘The Holy Blessed One said: It is right that he should receive this reward’ (Bamidbar Rabbah 21.1). The midrash then goes on to show why peace is such a great gift, and how important it is as a Jewish value. It is not stated explicitly, but I infer here that the midrash is saying that the gift of peace is the right reward for Pinchas because he, of all people, is the one who needs to learn about peace! The section of midrash ends with a statement from Rabbi Shimon ben Halafta (a second-century sage who lived in Sepphoris in Palestine), who states: ‘there is no vessel (כלי) that contains a blessing except for peace’. If we look in the dictionary for the word  כליwe find that the traditional translation as ‘vessel’ can easily be replaced by ‘tool’ or ‘weapon’. This potential translation immediately invites a contrast with the weapon that Pinchas used to slay Zimri and Cozbi. So, Rabbi Shimon ben Halafta’s claim that only peace can deliver a blessing can feasibly be read as a condemnation of Pinchas’ vicious actions.

The Torah goes on to say that Pinchas and his descendants are awarded a ‘covenant of eternal priesthood’ (Num. 25.13). This appears initially to be mysterious: why does he need to be given the priesthood, when as the son of a priest he is already entitled to it? Actually, the rabbis of the Talmud interpret this statement as an indication that no, Pinchas was not already a priest or entitled to the priesthood. In b.Zevahim 101b, Rabbi Hanina (a third-century Babylonian sage who moved to Sepphoris in Palestine) states that Pinchas did not become a priest until after he killed Zimri (Cozbi isn’t mentioned at that point). Later, in his commentary on the Torah, the medieval commentator Rashi adds more detail to this: the priesthood was given to Aaron and his sons, and it passed automatically to their descendants who were born after they had been ordained. In other words, because Pinchas had been alive when his father was anointed as a priest, he was not automatically included in the priesthood. It was only when God bestows this ‘covenant of eternal priesthood’ on him that Pinchas is really able to join the club.

Anyone who has seen the original Incredibles movie (2004), or the recent Netflix series, The Umbrella Academy (2019), will know that the power of the bitterness caused when someone who sees themselves as part of an elite but is denied that place, and the acts of violence and destruction that result, are a common theme in popular culture. Under this reading, Pinchas might be seen as a child overlooked when it came to positive re-enforcement and love. The fact that he is rewarded (both with the office of priesthood and the gift of peace) after he has committed such a horrific act of destruction is perhaps God’s admission that a mistake had been made in the previous treatment Pinchas had received. This is not to justify what Pinchas did, but it does serve as a reminder that when people do not value the lives of others, it can come as a result of the idea that their own existence is not valuable. We can combat this with love and positive re-enforcement.

Of course, later in the parashah we are reminded of how such injustice might be brought to the attention of power without violence. The daughters of Tzelofhad come forward to Moses to protest that they are set to inherit nothing from their father purely because they are women. ‘Why should our father’s name be lost because he has no son?’ (Num. 27.5) they ask. And their question is received favourably. God agrees with the daughters of Tzelofhad, and the law is changed to allow daughters to inherit from their father (in a case in which he has no sons). The interesting thing is that both the daughters and Pinchas are awarded an inheritance which (arguably) they had previously been denied. But the way they go about it is diametrically opposite: while Pinchas is violent and vitriolic, the daughters are diplomatic and pay particular attention to the law. That the latter course is more advisable is reflected in the fact that (as I have said) Pinchas is greeted by the rabbis with a distinct sense of embarrassment, whereas the idea that that the daughters of Tzelofhad should be awarded their inheritance is not (to my knowledge) ever challenged.