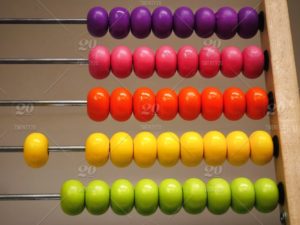 Counting makes us feel secure. We find consolation in this ancient practice. One-two-three-four-five fingers. Two eyes, two legs, two arms. We count because it puts our world in order. It is the oldest trick in the anti-anxiety trick-book. We count the benedictions in the morning, we count sheep before we go to sleep. We count the money in our bank account, and some the safety money they have tucked away. We count the children in their beds, our friends, steps a day. We count the new cases of Covid in our town, in our neighbourhood, on our street, we count the number of deaths in our age group, with our particular health condition. We count the dead in other countries, telling ourselves that we are better off, that we are still relatively safe. Counting is reassuring. 44,220 deaths is where we stand today, and we are 66.65 million. So we have lost 0.0006% of our population, that does not sound too scary. But counting can scare you. Over half of the over 60s who have been admitted to intensive care never returned home. Of the over 90s the death rate was 30 times more than in the general population. Numbers don’t lie, they tell you.

In our Parashah, Pinchas, the people are counted, for the third time since they left Egypt. But not all people are counted. The people who left Egypt and have not died yet – the generation of the desert – they aren’t counted. The under 20s do not count, and the Levites who will not get land, and women of all ages aren’t counted, don’t count too. When counting for a new purpose, that of inheriting the land, the new civic body is reformulated, and while all bodies are equal, some bodies become more equal than others. Everybody loves the daughters of Zelophechad in this chapter, the women who had no male siblings and pleaded before Moses that their father’s house deserves a piece of land of the land that they too were promised. Moses takes it up with God, because, of course it’s not so simple. He consults God so he can tell the people who might not want the girls to inherit, that they too have rights, it needs to be divinely sanctioned.

Our parashah, like our time, is a watershed, in which society is reinvented. From a flock of wondering ex-slaves the people are supposed to turn into a tribe confederation on its land. The power shift is swift, and he who has the numbers has the power. The Levites, the small elite group which has led the people in the desert lose their power. They are told that they would never have a land of their own within the promised land, and will have to rely directly on their fellow tribes for their support. Those who held all power will have no land of their own, no inheritance to give. Miriam died, Aaron died, soon Moses will die too. The new power is going to be different.  Going into the land it’s not the holy-man-Moses that is needed, constantly disappointed by the people with his God.  Joshua, who is named and appointed in this parashah, and the daughters of Zelophechad are descendants of a different tribe, a different man, a different model.

Entering the land, in order to restore justice, the leadership is given to the descendants of the boy whose brothers sold him, the man who got us all to Egypt, and rose to greatness over there. It is the moment of the house of Joseph. The daughters are of the tribe of Menashe, Joshua of Ephraim, both sons of Joseph. The new leaders must, going into a land of their own, know something about earthly politics, and being at the wrong side of power. They also cannot, like the Levites, depend on anything more than mercy. God ironically sets the stage for his own disappearance as a dramatis personae from the stage. Joshua would still talk to God, but would not communicate with God like Moses. The Judges will only meet but angels, and the kings God’s prophets.

The age of living only by the grace of God is over. A new, confusing era is about to start. As God grows distant, it is left to the people to make their rules. As we stand on the edge  like the ancient Israelites, before we emerge, may it be sooner rather than later, out of the Corona desert, what and who we count will make a difference to what kind of people we will be, what kind of relationship with God we will have. This parashah is a call for the political. Will our new counting, our new world, number all? Will we count children? Will we commit to opening schools over pubs? Will we count women, and especially mothers, who disproportionately lost their jobs during the pandemic, will they matter? Will we count BAME communities that were disproportionately affected? Will we address the problems that are specific to those who do not look ‘the same’? Will we commit to counting deaths in nursing homes, make these death counts? There is power in Numbers, and we need to start counting in a new way that will shape are new world better one than that we’ve left behind. Let us learn from the daughters of Zelophechad’s  request for justice, and for equal rights; from Joseph let us learn forgiveness and compassion, and how to rise above and think strategically. Let us not miss this moment, when we cross our Jordan, let every single body count.