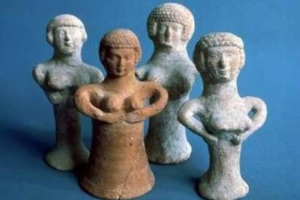 Why only one God?

A Jewish scientist finds herself at a conference, presenting a paper. A colleague asks her: “what’s your religion?” Nervous of prejudice, she says: “I’m an atheist.” Her colleague answers: “Yes, but is it the God of the Jews or of the Christians in whom you do not believe?”

It is a basic assumption of religion in the West that there is one God. Even for those who do not believe, they assume that it is one God in whom they have disbelief. Yet our society is filled with different religions and practices. When we encounter Muslims, Sikhs, Christians, or Hindus, we assume that underlying the diversity of our doctrines and rituals, there is an underlying unity of belief in a single and universal Being.

But it was not always that way. In fact, the idea of monotheism was novel and contentious throughout the entire development of the Hebrew Bible. The insistence on one God is Judaism’s great innovation, and we have built our monotheism up into an obsession. Knowing God’s oneness is the first commandment. Not worshipping other gods is the second. Worshipping other gods can incur capital punishment. It is treated as an unforgivable crime, on par with murder, and a Jew should choose death rather than worshipping another god. The Deuteronomic insistence on one God has become the centrepoint of Hebrew prayer: “Hear, O Israel, the Eternal One is our God; the Eternal God is One.”

In this week’s portion, Moses exhorts the Israelites: “Destroy completely all the places on the high mountains, on the hills and under every spreading tree, where the nations you are dispossessing worship their gods. Break down their altars, smash their sacred stones and burn their Asherah poles in the fire; cut down the idols of their gods and wipe out their names from those places.”

Archaeological excavations help us answer that question. Scientists have dug up altars, shrines, coins and amulets to help us make sense of pre-monotheistic religion. The Canaanites, who preceded the Israelites, had a family of gods: Baal the storm god; Asherah, the fertility goddess; Mot the lord of death; Yam, the judge of the sea; and Moloch, the child-eating fire deity.

This is referenced in Scripture: “Be careful not to be ensnared by inquiring about their gods, saying, “How do these nations serve their gods? We will do the same.” You must not worship your God in their way, because in worshiping their gods, they do all kinds of detestable things the Eternal One hates. They even burn their sons and daughters in the fire as sacrifices to their gods.”

In that case, the issue with polytheism is the unethical behaviour it engenders! The old gods of Canaan required evil practices as part of their worship, like ritual human slaughter. But then why not simply abolish those gods, and leave the others? Or just legislate against those practices but keep the rest of the religion intact? In the minds of the ancient Israelites, there must have been something that directly connected any worship of multiple gods with murder.

Here, archaeology can help us further. Digs from different times show us that polytheism wasn’t suddenly abolished, but fell out of favour when the Israelite religion took off. The Canaanite pantheon reduced to just a few gods. We can find statuettes representing them at most ancient Israelite Temple sites.

This is backed up by text: Jeremiah condemns the Israelites for baking cakes for the Queen of Heaven and making offerings to Baal. Jeremiah explicitly condemns this because these are the ways of the Egyptians, who held them in slavery. Idol worship, says Jeremiah, means keeping up the practices of theft, murder and lying. It is not just that the old gods require ritual murder, but that their whole religion is based on an Empire that was built on it. Idols are the symbols of captivity.

This point was finally hammered home when Jerusalem was destroyed, and Nebuchadnezzar took the Israelites hostage in Babylon. After Ezra led the return to the Land of Israel, we can find no more evidence of idols or their shrines. The people abandoned them altogether.

What could have been more convincing that idols were the work of murderous empires than exile in Babylon? The Israelites saw first-hand how looting, murder, war, conscription, and sieges were built into imperial expansion. We know that the Babylonians used their pantheon to legitimise their colonisation, as they brought the local gods of conquered people into their own cult and placed them in inferior positions. We know that the emperors turned themselves into gods and made people throughout their lands worship them.

All those gods in Israelite minds became death-gods. The only way to truly abandon the ways of the oppressors in Babylon and Egypt would be to uproot the idolatrous shrines and eliminate the pagan pantheon altogether.

Monotheism was an act of resistance to these corrupt ways. God’s unity was not a mathematical question but a moral one.

The One true God could not be co-opted into imperialism because it was universal: no one nation could control it. No ruler could declare himself to be that God because God had no flesh or form. And whereas the many gods constructed hierarchies and different customs for different places, with monotheism came ethical universality.

That is why one God was so important then, and why it remains so important now. God’s unity continues to represent the unity of human beings and the refusal of the faithful to be dominated. So, in answer to the question: “is it the God of the Jews or of the Christians in whom you do not believe?” the atheist could happily answer “neither.” And I will gladly answer “both.” They are One.