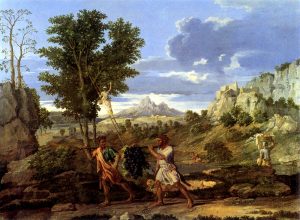 We read of these martyrs twice each year: in the Yom Kippur Eileh Ezkerah, typically recited by Ashkenazim during Mussaf; and in the Tisha b’Av kinnah (lament) Arzei haLevanon, in which we read:

Cedars of Lebanon, masters of Torah,
Shield bearers in Mishna and Gemara,
Powerful heroes, toiling in purity,
Their blood is spilled like water, and their strength, sapped.
They are ten holy ones, martryred by the kingdom.
For them, I cry, and my eyes flow with tears (trans. Tzvi Hersh Weinreb)

The occasion of these yahrtzeits is another reason why, as we read Parshat Shelach Lecha, we might cast our eyes forward to Tisha b’Av. The first 78 verses of our Torah portion recount the tragedy of the Meraglim, the twelve spies sent by Moses to reconnoitre the Land of Israel who brought back dishonest reports of horrors they had (not really) seen.

And it is written [Numbers 14.1, in this week’s Parashah] ‘And all the congregation lifted up their voice and cried and the people wept that night’ [after hearing the spies’ report]. Rabbah taught that Rabbi Yochanan taught that that day was the night of Tisha b’Av.  The Holy One, Blessed be He, said to them, ‘Since you cried futile tears [because the spies report was patently false, and against my word], I will establish this day as a day of weeping for the generations.’

Indeed, the point is clarified on bTa’anit 26b that:

On Tisha b’Av it was decreed that our ancestors would not enter the land, and the temple was destroyed the first and the second time, and Beitar was captured, and Jerusalem was flattened.

The leadership of the nation recognize the calamity of the spies straight away. Moses and Aaron fall on their faces in the ancient manner of supplication for mercy; Joshua and Caleb, the two righteous spies, cut keriah, tearing their clothes (14: 5-6). God’s verdict, although commuted from the harshest threatened plague, is nonetheless grave: that none of the generation of the spies, from those above the age of twenty, will reach the land of Israel. They shall wander in the desert and die in the desert; only their descendants will merit the land sworn to their forefathers. We find a profound difficulty in 14:18, which exactly reflects this balance of harshness and redemption in the Divine decree:

God is slow to anger and abundant in lovingkindness, forgiving iniquity and transgression, cleansing [some] and not cleansing [others], visiting the iniquities of parents on children, even to the third and fourth generation.

What remains in question is whether that final clause is intended to be exhaustive: will the fourth (or even the third) generation be the last punished, or might the punishment continue? The larger question is: how long can the punishment for a crime last?

Well, here, for one crime we seem to have three different answers. In the one sense, that of the Biblical Children of Israel entering the Land, the punishment lasts the time from the return of the spies until the entry of the people into the land of Israel—some forty years, probably less than two generations. A second possible answer is implied by the verse above—the punishment lasted three, or even four generations. For a third answer, our tradition teaches that the destruction of Jerusalem was, in some sense, an ongoing Divine punishment for that very same crime; the origin of the exile which we still live through today.

I will reserve judgment on to what degree galut, exile, is in any useful sense to be understood as punishment; just as I will reserve judgment on what understanding we should seek to maintain, in our broken world, of divine punishment and retribution. I will make some suggestion, though, about how we can reconcile this tradition which teaches of three punishments for the same crime. Decisions we make reverberate in our environment in space, as they do in time: we bear the consequences of the actions we have taken. How can Torah, our tradition, decree three durations of punishment for a single crime? Because this is how the world works. For our own misdeeds, Jewish tradition tends to stress, we should ourselves bear the burden of suffering and punishment. Nonetheless, it is clear that actions can have larger, chaotic and unpredictable consequences. It should not be a surprise if my major life choices continue to reverberate across three, or even four generations of my family. But when a nation transgresses? For the historical crimes of one people, perpetrated against another people, or against their natural environment? These misdeeds, we know, reverberate throughout history; and the ramifications of such crimes may well institute a ‘weeping for the generations’. We none of us have to wrack our brains for copious examples of this kind of justice. May our engagement with our tradition and our practice enable us to repair the damage—caused wittingly or unwittingly—by ourselves, by our ancestors, and by our nations; and may this contribute to the repairing of the world in which we live.