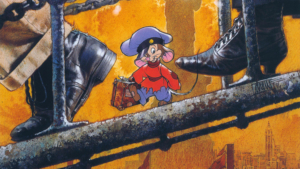 There are no cats in America and the streets are made of cheese!”

In one of my favourite childhood movies, a gang of mice pranced about the film screen singing these words. There are no cats in America and the streets are made of cheese.

In An American Tail, the protagonist is a seven-year-old Jewish mouse named Fievel Mousekewitz. In his home country, the mice are terrorised by cats. They struggle to eat and sustain their traditions. His whole family dreams of making the journey across the Atlantic to a new country where they won’t face these problems any more.

In America, they imagine, the cats, which represent persecution or kossacks or fascists or pogroms, won’t exist any more. After years of not eating, America will provide them with every food they have imagined. Over the ocean, even the streets will be paved with cheese.

As the plot unfolds, the mice arrive in New York. Fievel discovers that America’s streets are no more cheesy than the old country’s, and that cats are just as prevalent. In their new land, they will also be hungry, and persecuted, and tired, just as they were in the old. Their dreams could not be realised by moving from one country to another.

In this week’s parashah, Moses sends out scouts to survey the land of Israel. He asks twelve envoys to go into the country they expect to possess and report back on its contents.

I imagine this must have been a moment of great trepidation. We today know what other countries look like. We are able to travel abroad; we meet migrants from foreign places; we have access to people anywhere in the world through media in the palms of our hands.

Not long ago, such journeys were rare. People did not know how expansive the globe was or how similar and different people around the world would be to them. Perhaps travelling merchants brought fantastical tales from places they had never been. Some maps were marked with warnings of sea monsters and dragons. For the Israelites making the journey to Canaan, it would have been their first time leaving their valley in Egypt. Anything could await them on the other side.

When they came back, ten gave their report. The land has fertile soil, with large grapes growing on vines. But the people who live there are numerous and giant. We looked like grasshoppers to them. The cities are walled, fortified, and guarded. We have no chance of taking that land, and, even if we could, it will swallow up everyone who inhabits it.

Caleb and Joshua disagreed. They offered a minority report. We can do it. We can take this land. It is a land flowing with milk and honey. As long as you obey God and Moses, you can capture that place and live the life you have fantasised about.

According to our story, the other ten scouts were struck down with plagues and punished for their transgression. How dare they give such a negative report?

Only Joshua and Caleb go on to enter the Promised Land. Rabbinic commentaries make much of how courageous and optimistic those men were. They had faith. They believed in God’s strength and their own.

But here’s the thing. Joshua and Caleb were lying. That land was not flowing with milk and honey. They really were outnumbered. They really were about to take on fortified cities. It really was unlikely that an exhausted band of runaway slaves were going to be able to conquer an entirely new country.

All Joshua and Caleb were offering were politicians’ promises. They were giving false hope to keep people in line and stop them rebelling against Moses.

They say, at this moment, God decided that this generation would not enter the Promised Land. They were too rebellious and stubborn. Only Joshua and Caleb, who actually believed in God, would be permitted admission. This was their punishment: they will not know what the Land of Israel looks like, and they will wander further.

Preachers often lament how sad it was that Moses never saw the Promised Land. But how much sadder would it have been if Moses had reached it? Imagine if Moses had travelled all those miles, given up everything, fought with everyone, and struggled endlessly, only to see that the much-vaunted land of his ancestors was just another desert.

The lands of Israel are no more fertile than the plains on the east side of the Jordan. They are filled with inhospitable desert. While the Israelites have had to fight with Amalekites and Moabites to reach their destination, in the new country they will battle Canaanites, Philistines and other tribes. For all the promises of peace, the war is not over.

How tragic would it have been for Moses to reach that land flowing with milk and honey, where he would find that it had neither. The Promised Land was not as promised.

There were still cats in America. The streets were not paved with cheese.

At the conclusion of An American Tail, the mice eventually band together to defeat the cats. Using their cunning, technology, and finding surprising friends, they build a contraption to scare away their evil persecutors. They learn that there will be cats, but that they have to work in solidarity if they want to defeat them. They discover that streets are not paved with cheese, but that, if they find some, they can share it, and in those moments they will feel sated and free.

None of the spies could really give a report on the land, because it wasn’t a place they were going. It was somewhere they imagined they might build by common endeavour.

They could have said: “That land does not flow with milk and honey. But it could. We could make it feel like it was.”

Maybe we don’t learn those things from speeches and scouts’ reports. We only learn how to work together by doing it. We only discover what we are capable of if we try.

Only by working together can we make a world that flows with milk and honey.

Together, we can free the world of cats and pave the streets with cheese.