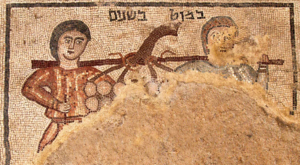 As the 21st of June is fast approaching, an age-old drama unfolds in front of our eyes. On the one hand stands Prof. Ravi Gupta, warning us we need to wait at least one more month beyond the set date, until schools are out, to finally get out of lockdown, as we don’t know enough about the Indian and other Covid variants. On the other side stand all those who have had enough of Covid, and think that the 75% of the adult population which at least has had one jab and the very low mortality rate at the moment justify sticking to the original plan. In the middle stands our prime minster, saying there is nothing in the data to stop him from removing all restrictions, but we must proceed with caution. But where do we stand? As always in this time of year, with the Israelites in the desert.

This weeks’s parashah, Shelach, is all about human choice, expressed again and again in each generation between fear and hope.

It begins with Moses sending out spies, under explicit orders from God to tour the Promised Land. Unlike the Israelites, God probably knew well in advance what the spies were going to see: a land flowing with milk and honey on the one hand, and a land which eats the inhabitants thereof on the other hand. The unknown factor, to all who are involved in this story, is what the spies are going to say, what choice are they going to make when presenting their report of the land to the people.

Sadly, we all know how it ends. Out of the twelve spies, only two, Caleb and Joshua, give a positive report. Scaremongering techniques, it turns out, have not change much in the past 3 millennia: As we read in Numbers 13 28-33:

“ But the people who live there are powerful, and the cities are fortified and very large. We even saw descendants of Anak (the giant) there. The Amalekites live in the Negev; the Hittites, Jebusites and Amorites live in the hill country; and the Canaanites live near the sea and along the Jordan.”… All the people we saw there are of great size. We saw the Nephilim there. We seemed like grasshoppers in our own eyes, and we looked the same to them.”

In the tour, which only actually describes the spies finding gigantic grapes, ten spies seem to be able to spot mainly danger. The South African variant, the Indian variant, the Vietnamese variant, all occupying every little peace of land, threatening like the descendants of mythological giants. No wonder they thought they would never be able to conquer the land!

But Caleb And Joshua had a different story to tell: “The land that we went through as spies is an exceedingly good land. If the Lord is pleased with us, he will bring us into this land and give it to us, a land that flows with milk and honey.”

In response, the Israelites try to stone Joshua and Caleb, and rebel against God, Moses and Aaron. God, as often happens in the desert,  kills quite a few Israelites, the 10 pessimistic spies included. The people, of course, cry and see their error. But their response to falling into a pit of despair is not quite you would expect, Or maybe you would?

Just like in our modern story, after being rattled to the bone, there are those who just want to get it all over with, tear off the plaster, remove all restrictions, stop living in fear, just go ahead and get this Canaan, this rock concert, this trip to France.

We can’t say that Moses didn’t warn them that’s not a great idea,  as in Number 14: 41 he said, “Why are you disobeying the Lord’s command? This will not succeed!.” Nevertheless, they got on with it, only to be defeated by the Canaanites and pushed away to Hormah, which might be a name of a place, or just a synonym for utter destruction.

I will not tell you how the story ends, as I do not wish for any of us to keep circling in the Corona desert for forty years. I will by no means compare Moses to Johnson or Gupta to the ten spies. I will, however, remind us that while the question of despair vs. hope is old, our answers to it can be new, and that it is faith and faithfulness that we need to get us through. Faith that this would not last forever, and faithfulness in our commitment to one another as a society that seeks to act in favour of all of its members, young and old. And may we get to our promised land of freedom quickly, in the days of our lives.