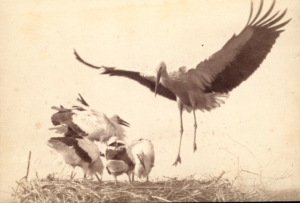 ‘The following you shall abominate among the birds – they shall not be eaten, they are an abomination… the stork; herons of every variety; the hoopoe and the bat.’ (Lev 11:13-19)

Strong words, justifying the Ramban’s understanding that forbidden birds – being, as they are, principally birds of prey – are prohibited on the basis of their cruel and dark natures, their overheated bloods, and the possibility that those who consume them might thereby imbibe such unpleasant character traits. And yet, the stork – for such is the usual translation of the Hebrew chasida – has its own mythology of an entirely and intriguingly different character.

his mythology of the stork includes that they look after their aged parents (Ancient Greek), make an annual pilgrimage taking in Mecca for their piety (Islamic), prevent house fires wherever they nest (central and eastern European), and deliver newborn babies (perhaps originally Greek, eventually prudish). In Hebrew too, the chasida is so called for the kindness (chasidut) with which it treats its fellow storks (bChullin 63a; cited by Rashi on Leviticus 11:19). Ibn Ezra also notes a tradition that the stork actually scatters kindness as they go (m’fazeret chesed), whilst admitting regretfully that this is far-fetched.

Here, then, later commentaries find an interesting byway for discussion. If the stork is so called because of its distinguished middah (attribute) of chasidut, and birds are rendered non-kosher because of their negative middot, what unkoshers the stork?

The Orchot Tzaddikim, or Sefer ha-Middot – an anonymous late Medieval work of musar (moral) literature – has an elegant philological reading around the root chet, samech, dalet – which might suggest a theory for us. Noting that the Aramaic term for a stork is chavarita, or ‘white’ (Onkelos to Leviticus 11:19), the author  links this to the whiteness of shame – our Rabbis always assume the typical response to being shamed to be a turn from red to white, as the blood runs out of our face. The Orchot Tzaddikim turns now, again, the Targumic Aramaic, reminding us that the Hebrew herpah becomes the Aramaic chisda – sharing a root with both the Hebrew chasidut (kindness) and chasida (the stork). To serve God, the author suggests, requires both a certain shame – in avoiding misdeeds even when we are not being watched by humans, a sacred shame arising from our awareness of Divine oversight; and also a certain shamelessness – too many avoid piety or mitzvot because they are ashamed in front of their fellows, and this kind of shame is only detrimental to our religious life. Hence this kind of philological mobius strip connecting storks, whiteness, shame and kindness. The stork’s error, which renders it unkosher, may be that it is in some sense too white. It cannot change colour, it cannot manifest shame or awareness of divinity – it symbolizes the person who does not know the difference between kodesh (sanctity) and chol (workadayness, or profanity).

An alternative, and rather beautiful, suggestion as to why the stork is unkosher comes from the followers of the Ruzhiner Rav. Rav Yehuda had claimed that the stork is called chasida because it acts with kindness l’chevratei – to its fellows. The Izhbitzer and the Chiddushei haRim both read in this a veiled reference to the negative middah which will render the stork unkosher – it is kind, but only to its friends, to its fellows. The stork lacks kindness towards those who are different from itself. Kindness which is limited to one’s friends is not here a praiseworthy quality – it is understood to be an instrument of differentiation and discrimination, which puts up walls between self and other which would better be pulled down. Rabbi Zalman Kastel, who directs the Together for Humanity Foundation in Australia and grew up (and then left) an insular, ultra-Orthodox community uses this parable both to praise and to castigate the charitable practices of the Jewish community. How wonderful we are, he says, at standing up for our own. How much better might we be, though, at helping those who are beyond our community boundaries.

Such an ambivalence towards the humble stalk is carried also in our own culture. The stalk carries all of the positive symbolism of those myths I cited above, but in its name lurks also an etymological echo of starkness, of something stiff and uncompromising. I love these texts because they remind us of the infinite depth which our tradition finds in every one of our Torah’s words; because they remind us that every thing which is a thing has a multiple valency; and because they exemplify that in the most arbitrary details of Jewish law musar lies dormant, waiting to be mined. May we merit to be ashamed when it is called for, and shameless – or defiant – in turn; and may we not discriminate in our dispersal of the various middot of kindness. Shabbat Shalom.