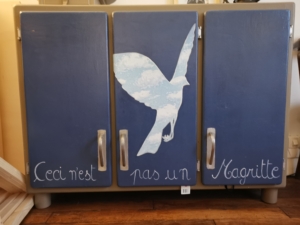 Five years ago, the white sky slowly crumbled into a dandruffy snowfall over Paris. A cold and sharp air blew on the long queue of curious people frozen in front of the Center Georges Pompidou come to see the great retrospective Magritte untitled La Trahison des Images.

Inside the museum, I discreetly followed in the track of a tour-guide whose high voice tore the silence at the same time as his yellow umbrella tore the crowd.

“It is in fact to consider the object as a concrete reality and not according to a term at the same time abstract and arbitrary.” he said… But it was his use of the term “suitcase-word” or “basket-word” in French that caught my attention.

According to the French philosopher Pierre Janet in his book les débuts de l’intelligence, the basket would be the sign of the origin of human intelligence:

“It is specific to the species: chimpanzees pick fruit, one by one, but without collecting them and without provision, there is no forecast. No container, no future. Who picks up anticipates. And no stock, no civilization.

What is a basket at the end ? An astonishing thing, originally a basketry, which serves to concentrate the scattered and therefore to make one with the multiple but also to convey the whole from one point to another. “

Or in the Yoma tractate in the Talmud, the text tells us that affliction consists in not having any bread in your basket. According to the Sages, the point of not being subject to affliction but being fully human is the ability of projecting ourself into the future.

However, projecting ourself into the future is precisely what Pharaoh makes impossible by ordering the midwives to drown all Hebrew male children in the Nile.

In an act of life and resistance, Moses’ mother saves her son’s life by weaving a basket with reeds. The same reeds as in the Sea of ​​Reeds through which Moses and all the Hebrew people will pass to escape Pharaoh’s armies

But exactly what kind of object is Moses put in ? A basket ? A bassinet? A braided box? The Torah does not describe its form and names it a “Téva“; but the Hebrew language pushes it forward. The Talmud tells us that a teva can also mean “a word”.

Now a word, like a basket or a box, encompasses a set of meanings and realities.

When we hear, for example, the word “bird” we mean a flying animal with feathers, a beak and laying eggs. Without the existence of this basket-word as we would say in French, it would have been necessary to use several terms to define what kind of animal a bird properly is. The existence of the signifier “bird” therefore makes it possible to link several different concepts.

Thus a word concentrates what is scattered in the same way as a basket described by the philosopher Pierre Janet ,and it is also what naming is all about.

The mother of Moses therefore literally places her child in a basket-word.  A child whose name (Mosheh in Hebrew), if read backwards, also means “the name” and is generally used to refer to HaShem: God himself.

This teva, like the basket therefore concentrates what is scattered and brings together several realities, several different figures in a single signifier, here regarding Moses : a child saved from the waters (the Torah’s derivation of the word mosheh), the greatest leader of Israel, a child brought up like an Egyptian prince, a shepherd who grazes sheep on Mount Horeb,…

But unlike the word “basket-word” used by the tour guide I was tracking, the title of the parashah, Shemot means “the names”, the words by which we designate things and people. Now the word “name”, shem, can also, according to Rabbi David Kimchi, be read “sham” (over there) and thus suggests that the notion of movement goes hand in hand with the fact of naming.

In the same way, the name of God “HaShem” (The Name) can therefore be read “HaSham” (the “one over there”). A name is a way of making the other exist, of projecting its complex and condensed existence in a word in a different place and time by naming it from “somewhere else.” A name therefore allows one to designate in one  word several realities and store meanings in it.

In the beginning of chapter 3 of the book of Shemot, when Moses sees the burning bush through which God will tell him that he wishes to be named “I will be who I will be”, he is first surprised then decides to approach. The text then uses a strange formula: “I must turn aside to look at this marvelous sight; why doesn’t the bush burn up?”

To see the bush through which he will hear God call to him, Moses must “turn aside”, shift, step in front of the image in order to read it. Now in Hebrew, the verb “to call” is the same as that which means “to read”. To call God is therefore to “try to read him”. And to do that, Moses has to turn away. He has to step aside.

And making a step aside from the first reading of an image and seeing beyond it, is precisely what Magritte invites us to do… absorbed in my reveries, my ears had lost the guide and his yellow umbrella in the crowd of visitors when suddenly , just as in a movement of waves of the sea, the crowd opened in front of me and let me see the painting La Clairvoyance.

In this work, Magritte shows us a painter whose model is an egg placed on a table. On the canvas, the painter draws a bird with outstretched wings.

The function of the image is not to paint reality and the artist portrayed by Magritte is not content to reproduce it either, but he goes far beyond by representing what his eyes do not yet see.

It turns out that the famous passage of the burning bush can be read in a similar way in the sense that, approaching the bush, Moses shifts, takes a side step to welcome in a way the caption of the image of the burning bush. God in the biblical text formulates it not by “this is not a bush” but by naming himself “I will be who I will be”.

God, whom we call HaShem (the name), responds to Moses’s necessary step aside, by a movement as well as words by naming himself in a future tense.

HaShem wants us to call him, or as the Hebrew invites us by playing on the root קרא, to “read” him, “I will be” in the future, because a name does not designate a cramped reality in time but human beings in movement created in His/Her image.

Being named means to be in relationship with an “over there”. Through a distance between a “here” and a “there”.

In Hebrew being named implies an encounter with an “other”.

There was something transcendent in this painting that faced me in the crowded room of the Center Georges Pompidou that day. According to Magritte, the Clairvoyance depicted in this painting was to suggest that the function of the creator was not to paint the reality but what the eyes could not yet see.

In this, unwillingly, Magritte has been walking in the footsteps of the Talmudic precept which says that what grounds the house of study (it is not a master, it is not even the text but) is the constant research for chiddush (novelty). The artist painted by Magritte was then, like the Talmudist, created  in the image of God “conjugating himself in a future tense” from the center of the burning bush.