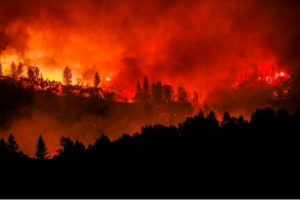 Stop me if you’ve heard this one before. A man is herding sheep through a desolate landscape. He seems to be a loner, a random shepherd in the vast wilderness. He is in fact a fugitive from justice, a former Prince, wanted for murder in the land he’s fled. Now he’s here, with a restless mind and uneasy heart, all but reconciled to a life on the lam.

Then, behold: A bush aflame, alight with fire, but not consumed by it. Our shepherd stops to marvel at this, and as he does, he is called by name.

By now you know our shepherd is Moses. The voice he hears? The voice of God.

God tells Moses He has heard the cries of “my people, the Israelites”  and has seen how the Egyptians oppress them. And so, God continues, “I will send you to Pharaoh, and you shall free my people from Egypt.”

And we can imagine how Moses reacted to that. I mean, what would you do? I know what I would do. I’d be like…Wait…whaat?

And that is how Moses replies: “Who am I to go to Pharaoh and lead the Israelites out of Egypt?”

Who indeed? Who is he that God has chosen him—a murderer raised among Pagans, who does not identify with the people God is asking him to free.

Of all the questions—and there are many—this scenario brings to mind, the one that seems to me most pertinent, and most urgent, for each of us today is this:

If God had this mission in mind, why didn’t He just call out to Moses? Why the fuss with the fiery flora?

The answer I suggest is this:

By this point in the Biblical narrative, God’s faith in His creation is badly shaken. He can’t count on humanity to use our free will and moral agency to do good. Perhaps God regrets relinquishing His power over our souls and our disposition to do ill. Maybe He laments endowing us with freedom to take this bountiful earth, our very lives and those of others, for granted.

The bush is a test. Will Moses walk by, oblivious or inured to this fabulous phenomenon? Or will he be awestruck by the spectacle, captivated and intrigued, alive to the moment and aware of the possibility it represents to transcend the quotidian to a higher purpose.

It’s clear that Moses passes the test. But it takes some back and forth with God before Moses understands the implications. Convinced he isn’t up to the task (perhaps the first manifestation of anticipatory imposter syndrome) Moses tries to persuade God He has chosen the wrong man, citing three strikes against himself.

God has no time for this. He’d determined Moses’s fitness for His purpose the moment Moses stopped, his consciousness seized by what he saw. Here was a man receptive to “signs and wonders”, a man so captivated and enlivened by this dazzling manifestation God’s power God knew He could count on Moses to trust Him to steward him safely through the perils involved in carrying this through.

Now I’m going to ask you to reimagine this scene.

Our Shepherd is out with his flocks. He’s wearing headphones. He’s listening to a true crime podcast or maybe the latest drop from his favourite band. He surveys the landscape, his mind full of apocalyptic images because he was up late the night before watching a sci fi thriller featuring a fiery asteroid colliding with earth.

He walks by a bush that seems to be burning. But what of it? It’s nothing compared with an apocalyptic asteroid. He gives a virtual shrug and moves on.

God is helpless to get his attention.

And what about us?

How present are we before God and before and among one another?

In his lamentably prescient 1986 book Amusing Ourselves to Death sociologist Neil Postman warned that ready access to entertainment threatens to rend social and civic contracts and undermine fundamental cultural and spiritual values. In predicting this outcome, Postman cites a similarly prescient warning  sounded in 1932 by Aldous Huxley who wrote “people will come to adore the technologies that undo their capacities to think.”

And by extension, I would add, the very capacity that made Moses the right man for God’s mission: the capacity to—to borrow the title of a 1970s meditation manifesto: “Be here, now”.

We divert our attention to an extent that would not have been thinkable in those years now gone when it wasn’t possible. Yes, lock downs have forced us to shift work life and many of our social engagements online. But we hang on longer than necessary, choosing to become ever more dependent on ever more sophisticated devices and fast-multiplying streaming services to bring the world—or some version of it– to us. We may find ourselves drifting from what we need to do and need to know to what we want to see and hear. We use the virtual world to avoid the very thing we need to cultivate ideas, deliberate options, determine priorities: time alone with our own thoughts. Reading becomes a chore, we abandon the ideas—from the majestic to the mundane–put forth at pains over centuries since Gutenberg If the ambitions of those behind META are realised, it will be possible shortly to enter an alternative reality so convincing we won’t be able to distinguish between what we have experienced in real life and what we have paid to have a programmer imagine for us. In ghastly fulfilment of Huxley’s dystopian prognostication, we will freely allow a commercial enterprise to co-opt our consciousness.

If we choose to immerse ourselves in virtual worlds, what happens to our engagement with this one? Will we ever again “be here, now?”

To what sounds have our noise cancelling devices already rendered us deaf?

To what sights have our screens rendered us blind?

Can you hear that hungry child crying? Can you see her shrunken and failing to thrive?

Can you hear the exile pleading for refuge? Can you see the stone faces of those who would drive them away.

Can you hear the aged longing for company? Can you see the lost look in their dimming eyes?

Can you hear the glaciers breaking, the desiccated trees give way?

Can you see the unforgiving waves wash over our shores, our forests dormant, dead.

And can you now, at long last, see the flames of a world on fire?

If we were to look up from the relentless stream of distraction in our palms we just might see them. We might see them and recognise, as Moses did, God calling us to act.

But as I write this, I am imagining Him wailing to be heard above the podcasts, to be seen beyond our screens.

Abraham Joshua Heschel of blessed memory echoed his friend Martin Luther King in calling us to act with “the fierce urgency of now”, to see the fire and hear the voice of God saying “I need you, now.”

We know what to do. Pocket the phone. Look up. What do you see? Listen. What—who—do you hear? Maybe it’s a bus rumbling by, or maybe a woman outside Sainsbury selling the Big Issue. Maybe it’s a classmate or a colleague whinging about a bad day, or maybe it’s a young person huddled outside a tube station moaning so faintly that only you among the hoards of passers-by catch his cries.

Maybe it’s the voice of God with a message for you, if only you are here to receive it.