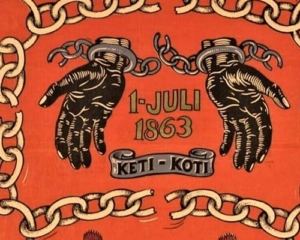 On 19 December the Dutch prime minister Mark Rutte apologised for the role the government of the Netherlands had played in slavery. In Dutch, English, Sranantongo and Papiamento (languages spoken in Suriname and the Caribbean part of the kingdom) he said sorry for the they way in which the government had facilitated slavery, for its treatment of people and for not recognising the consequences of slavery after its abolition on 1 July 1863, which will be a 160 years ago this year.

The apologies got a mixed reception. Some listeners were moved to tears and welcomed his honesty. Others doubted if he was sincere. Some objected to the place or to the speaker. Earlier in the month six organisations had gone to court to change the date to 1 July, to Keti Koti, the celebration of the abolition of slavery. Yet others questioned whether it is possible to apologise in 2022 for what was done by previous generations.

In his speech Rutte admitted that for a long time he himself had not thought it possible to take responsibility for what happened in a distant past. Yet, he realised he was wrong, as the consequences are still with us today: “in racist stereotypes, in discriminatory patterns of exclusion, in social inequality.” These apologies were only the beginning. He spoke of a ‘comma’ rather than a ‘full stop’. There is much more to be said, more research to be done and more conversations to be had. And he used the term tot slaaf gemaakten (‘enslaved’), rather than slaaf (’slave’). This term makes clear that slavery does not define a person, but that a person is made a slave by others. Slavery is about devastating power relations.

The Dutch expression ‘tot slaaf gemaakten’ calls more attention to itself than its English equivalent ‘enslaved’, if only because the additional syllables disrupt the rhythm of the sentence. Thus, I found that the phrase stayed in my mind and I was trying it out in different contexts. Doing so made me realise how deep rooted the term ‘slave’ is in my vocabulary – and, with it, a problematic worldview.

The example that stood out to me comes from Plato’s dialogue The Meno. Like many lecturers of philosophy, I have taught this dialogue to explain Socrates’ idea that all knowledge is mere remembering. Before we were born, we knew everything, but at birth we forgot it all. (An idea that we know in our tradition in the story of the angel who strikes our lips and leaves a mark, in Midrash Tanchuma, Pekudei 3). In Plato’s dialogue, Socrates tries to convince Meno of this idea through a demonstration. He asks a slave boy a series of simple questions about mathematics. The dialogue raises important questions about knowledge, but that the boy is a mere tool in the argument is rarely noticed. Yet, it becomes obvious once we start calling him ‘enslaved’ rather than a slave. Then, the focus shifts from a theory of knowledge to power relation. The boy becomes an individual and my imagination starts speculating about what he thinks and what he will tell others.

Of course, this example will speak more to some than it does to others. Yet, I assume that each of us can think of occasions like these in our own field of work or other aspects of our daily lives, where using the word ‘enslaved’ will disrupt and start giving a voice and an identity to those who were assumed to have none. Unfortunately, their history is not well preserved. And yet, we need the stories to see their humanity and individuality in a system that made them into items of trade, tools for work or subjects to cruel treatment. Often one needs to imagine stories, as facts are sparse. In his speech, Rutte spoke of Anton de Kom, author of Wij Slaven van Suriname (We Slaves of Suriname). The book is one of the first to radically rewrite the history of Suriname. De Kom often uses imagination where existing histories had only preserved the words of the powerful.

Such contemporary reflections on slavery puts the parashot of the coming weeks in a different perspective, just as these parashot can provide insight into an issue that is still very much contemporary. This week’s parashah emphasises the significance of names. It is in its title as it starts with naming the sons of Jacob. The importance of names returns only a few verses later when we are told the names of the two midwives, Shiphrah and Puah, before we even know of their deeds. We can also ask what names have not been preserved.

he parashah also exemplifies how a lifeline can come from what power disregards. Pharaoh tells the midwives to kill baby boys, but to let baby girls live, because he does not conceive that it will be women who subvert his plans and undermine his power. And yet, Shiphrah and Puah will tell him an obvious lie and save the boys. It is women again who will make sure that Moses lives. His mother Jochebed will put him in a basket, his sister Miriam will watch the basket until her brother is safe, and Pharaoh’s daughter, named Bithiah (daughter of God) by the rabbis, takes him in. In short, those whom Pharaoh does not see are the beginning of his end.

In the coming weeks, and again at our seder tables, we will remind each other, that we were brought out of slavery. This is an important reminder, even if we may not fully understand what these words mean. The history of any slavery is a messy business. It will take a long time to get slavery out of our system and it will be uncomfortable. Yet, as the Dutch MP Jorien Wuite reflected after Rutte’s speech, we have to seek out discomfort if we really want to change relationships on the basis of equality.