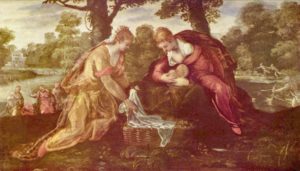 This week’s Parashah describes changes in the Israelites’ circumstances after the death of The Pharaoh who allowed them to settle in Egypt. Their situation continually worsens. Finally, Egyptian policies towards the Israelites are nothing short of genocidal. The decree that threatens the very existence of the Israelite people is described as follows:

The king of Egypt spoke to the Hebrew midwives, one of whom was called Shifrah and the other Puah. ‘When you attend the Hebrew women and see them giving birth,’ he said, ‘if it’s a boy, kill him; but if it’s a girl, let her live.’ However, the midwives were God-fearing women, so they didn’t do as the king of Egypt ordered but let the boys live. The king of Egypt summoned the midwives and demanded of them, ‘Why have you done this and let the boys live?’ The midwives answered Pharaoh, ‘It’s because the Hebrew women aren’t like the Egyptian women — they go into labor and give birth before the midwife arrives.’ (Exodus 1:15-19)

Every time I read this parashah in the past, I cannot help but admire the courage of the Hebrew midwives, individuals placed at the very bottom of Egyptian social ladder by virtue of their gender and nationality, to lie to Pharaoh to save the the Israelite boys. However, this year I chose to focus on systemic violence unleashed upon the Israelite males. My first thought connected it to the time of the occupation of Poland by Nazi Germany. In this period it was much more difficult for Jewish boys to survive in hiding than it was for girls as they could always have been identified as Jewish due to their circumcision. My next thought was concerned with the present. I asked myself: are there any situations today in which boys are disproportionately affected? What particular dangers are they facing?

Firstly, boys are much likely to be used as child soldiers. According to Child Soldiers World Index 20% of UN Members States still enlist children – mostly boys – into their militaries. Since 2016, child soldiers have been used in military conflicts by 18 countries.[1]

Secondly, boys are much more likely to commit suicide than girls. According to the Office of National Statistics the suicide rate among 15- to 19-year old in 2017 was 7.1 per 100.000, compared to 2.1 for girls from the same age bracket.[2] It does not mean that girls do not suffer from mental health problems – they are more likely to self-harm and to be hospitalized due to mental health crises. However, they are also more likely to be diagnosed with depression and prescribed antidepressants. It seems that society still hasn’t created a culture in which boys could feel fully comfortable seeking help with their mental health issues. The belief that boys should ‘toughen up’ seems to be lethal to many of them.

Thirdly, in many countries the life expectancy gap between women and men is much higher than it is in Britain, where in 2016 women lived 3.6 years longer than men.[3] In Russia in 2015, this gap was a staggering 11.6 years! This shows, among many other things, that in many parts of the world men live much shorter than they could if the culture of their countries encouraged men to take care of their health more.

What do these examples of modern dangers to young men have in common? I believe the answer is the traditional model of masculinity which defines manhood in terms of control, dominance, competition and strength. This model of toxic masculinity manifests itself in military conflicts; it leads to boys struggling with mental health on their own; it prevents many men worldwide getting diagnosed in time to cure their conditions because visiting a doctor just to check one’s general health is considered ‘unmanly’ in their societies.

This model of toxic masculinity is often discussed in the context of its negative impact on women. However, as we have just seen, it often is just as dangerous for males. When we confront it in our everyday life, we are not just saving the boys. We are, just like Shifrah and Puah, securing a better future for everyone.