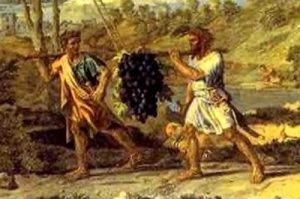 Our parashah is famous for the story of the explorers that Moses sent to spy out the Promised Land. Moses asked them to see if the land was fertile or not, if its inhabitants were strong or weak, and so on. When the explorers came back, ten of them deemed that the inhabitants of the country were too powerful to be defeated. So, they discouraged the people of Israel from conquering the land. Caleb and Joshua were the only ones who kept confidence in their ability to succeed.

The ten explorers who renounced the conquest are deeply criticised for their bad report. However, we need to ask in the first place: why did Moses send explorers to the Promised Land? Was he not convinced that the Promised Land would necessarily be good, and that the children of Israel would be able to take possession of it in order to fulfil the Eternal’s promise?

What is all the more perplexing is that, at the beginning of the parashah, the Eternal himself commands Moses to send explorers. What was the Eternal’s purpose in doing so?

Keli Yaqar explains that the words by which the Eternal said to Moses to send explorers, “send for you” (= shelah lekha), implied that this expedition would be beneficial for Moses (“you”) but not for the people (“them”). Indeed, the Eternal already knew that, as a result of this expedition, it would be decreed that the people of Israel would have to wait for forty years before entering the land. However, as it had been already decreed that Moses would not enter the land, this delay implied that Moses would live forty more years than he should have.

This commentary is puzzling, since it implies that the Eternal knew beforehand what the report of the explorers would be. So, what was the point of sending them?

Maybe the Eternal knew that the Hebrews were not mature enough to develop the mental strength necessary to resist the obstacles they would meet when taking possession of the Promised Land. In other words, the goal of this expedition was to demonstrate that the people was not yet ready for the conquest.

So, maybe the forty supplementary years in the desert were not a punishment, but rather a necessary step for the people to get spiritually prepared for the conquest. Indeed, the children of Israel had very recently come out of slavery. Since their childhood, they had integrated, deep in themselves, a way of thinking and of behaving which was conditioned by their life as slaves: to become fully free would take them many years, maybe a whole life. It can be evidenced from the reaction of the people, when the explorers delivered their bad report: they wanted to return to Egypt. They all knew that Egypt was not great, but it was familiar. It was part of their story; it shaped their lives, whereas the Promised Land was nothing concrete to them, but a mere dream.

However, we may still ask: how did Caleb and Joshua, who gave a positive report on the Promised Land, overcome their fear while the over explorers did not?

According to Rashi, Moses prayed for Joshua in order to save him from the bad influence of the other explorers. Thus, Moses seems to have predicted what would happen, which reinforces the impression that sending explorers was a mere way to test the people, and to evidence their need to get more spiritual preparation before the conquest.

However, this commentary is perplexing, since it implies that Joshua did not resist the influence of the other explorers out of his own strength, but rather because he was under a special protection. We may suppose that he deserved this special protection because of his peculiar devotion to Torah study with his teacher Moses.

What about Caleb? Rashi says that, out of the twelve explorers, he was the only one who went to Hebron, where the Patriarchs were buried. There, he laid down over their graves. This attitude may represent his attempt to reconnect with his remote ancestry, and to become fully aware of the profound link that the people of Israel had with the Promised Land. In other words, he developed a powerful and personal relation to the Promised Land, which helped him overcome his fears.

The other explorers and the rest of the people did not seek to establish a deep connection to the Promised Land. The Eternal’s promise did not have enough meaning for them to drive them to the land whatever the difficulties. Because the Promised Land was not essential for them, they did not want take risks for it.

Thus, they needed forty additional years in the desert in order to build meaning around the Promised Land, and to strengthen their relationship to the Eternal. The first step to build this link seems to have been the commandment to wear tzitzit. A blue thread was located among the other threads of the tzitzit: the Sages comment that, the blue colour alluded to the sea; the sea alluded to the sky; and the sky alluded to the throne of glory of the Eternal. Thus, when the Hebrews would wear tzitzit, they would necessarily think about the Eternal, his creation and his power. It would help them create a deep relationship of confidence with the Eternal, so that they would not anymore be misled by their fears.