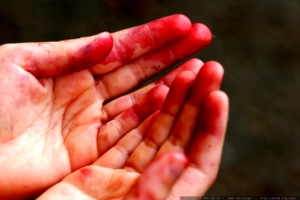 The Work of our Hands

For many hours of the working week, whether I am travelling or at home, the radio (classical music, since you ask) is my aural wallpaper. It provides a background which I barely notice when I am busy – until something stands out as particularly lovely, loathsome, or just annoying.  In the latter category recently has been a commercial, interrupting the music several times an hour in the early mornings, for a brand of motor vehicle.  It starts by listing with sound effects some of the ‘things which hands do’, and then proposes that the car’s many automated features can ‘give hands a rest’. I don’t recall the precise wording of the commercial, but it is clearly describing 21st century hands which tap and swipe in addition to grasping, steering, pointing, carrying, throwing, and so on.

Human hands are truly remarkable.  They can build and shape; they communicate using gestures and signs; they can caress and comfort, but they can also strike and wound.  Jewish hands shake lulav, and cover eyes for Shema and candles; they sign documents; they bless and they transmit authority;  we use them to beat our breasts when acknowledging wrongdoing.  The Hebrew word yad conveys a sense of power and control, and also memory (as in ‘Yad Vashem’, for example).

Hands play a significant role in the last section of Parashat Shoftim (Deuteronomy 21: 1-9).  Having enumerated  the legal arrangements for establishing and maintaining  a just society, we then consider its antithesis:  an unsolved murder.  A corpse lies unidentified in open country;  the killer is presumably still at large. This is a stain on any society in which such an incident can occur, a pollution of the very land itself.  The remedy prescribed by Torah is a strange ritual in which the nearest settlement must provide a young cow which has never been used for work (an expensive animal); it is to be killed by breaking its neck.  Its throat is not cut, it is not burnt, it is not eaten – this is not the usual fate of a sacrificial animal. The elders of the settlement wash their hands, declaring:

‘ “Our hands did not spill this blood; our eyes did not see… do not let guilt for the blood of the innocent remain among Your people Israel.” ‘

Whether each of us prefers to make an association to Lady Macbeth, or to Pontius Pilate, or to sanitising our hands in the era of Covid, we all intuitively understand that washing hands in public is both an acknowledgement of possible contamination, and a real and symbolic distancing oneself from it.  Our hands are not responsible, yet we acknowledge the stain.

Maimonides, writing in his Guide to the Perplexed, considered that the elders are calling on God to witness that they are not even indirectly responsible for the death by failing in their civic duties of hospitality, care and maintenance of public facilities:

‘that they have always kept the roads in good condition, have protected them, and have directed every one that asked his way; that the person has not been killed because they were careless in these general provisions…’

Is this perhaps a model for addressing a communal crisis?  Publicising rather than ‘hushing up’ the tragedy, acknowledging the shock to the community, leaders stepping forward to make it clear that this is a communal issue, even if no -one present is personally liable for the crime.  Recognising that ‘something needs to be seen to be done’ to reduce the risk of vendetta or vigilantism.

We invariably read this parasha during the month of Ellul, just over a month before Yom Kippur, so themes of guilt, responsibility and repentance should already be on our minds, and there are indeed resonances between this passage and our High Holyday liturgy, the ‘scapegoat’ ritual in particular.  Yet the High Priest in Leviticus lays his hands on the goat and thereby  transfers the sin or guilt of the people to it. The town elders in our text do not lay hands on the heifer, but wash them instead.  It is their prayer, not the ritual itself which is the key to absolution.

Our own Vidui (confession) which we will repeat throughout Yom Kippur also looks very different from the declaration by the town elders in our text.  Rather than declaring ‘we are not liable’, what we will recite is:  Ashamnu, Bagadnu, Gazalnu – We have sinned, we have betrayed, we have stolen….. – admitting to a list of sins which we personally have not committed.  The rabbis of the Talmud explained:  Kol Yisrael Areivim Zeh BaZeh – all of Israel are responsible for each other (Talmud Shavuot 39a).

‘A person is held responsible for the sins of his family, or of his community, or even of all mankind, if he fails to use his influence for the corrections of wrongs.’

In other words, before I figuratively ‘wash my hands’ of something that is amiss in my world, I need to ask myself:  Might I have been able to stop this happening?  Can I be a better role model?  How could my hands make a positive difference?

As Parashat Shoftim brings us close to the end of another year, let us be mindful of the power we hold in our hands for good and for harm.   In the words of Psalm 90:

May the favour of the Creator our God be upon us to support us in the work of our hands, and support the work we do.