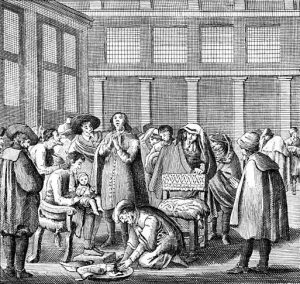 What do we know about circumcision? Do Jewish people do it for health reasons? If so, what is the medical proof that it is good for us? If not, are there ethical or other reasons to circumcise Jewish boys?

In February 2018, a bill in Iceland that could make it a crime to circumcise infant boys for nonmedical reasons drew strong support from hundreds of doctors and nurses there, and criticism from religious leaders.[i] What is the Jewish approach to circumcision?

In the portion Lech Lecha, the Torah commands Jews to circumcise their male children on the eighth day of life, and to circumcise their male slaves[ii]. Several commentators ask why this commandment is repeated in Parashat Tazria – the portion which Progressive Jews in diaspora and all Israeli Jews read around the world this week. Sefer haHinukh – an anonymous work which systematically discusses the 613 commandments of the Torah – offers a general explanation on all the instances where a law is repeated in Torah: ‘many other commandments are recapitulated several times in the Torah, each time for a specific purpose’[iii] Therefore – as often the case in Judaism – there is more than one approach to Brit Milah (Hebrew for “covenant of circumcision”). At the same time, the Biblical text itself tells us, rather surprisingly, that Israelites did not always fulfill the commandment of circumcision: According to the book of Joshua, ‘none of the people born after the exodus, during the desert wanderings, had been circumcised’[iv] .

The Progressive Jewish world changed its approach towards Brit Milah over time. From 1890, converts were no longer obligated to be circumcised. A similar policy was pursued by Claude Montefiore’s Jewish Religious Union, established in Britain in 1902. Later, numerous rituals became popular again, although as a matter of personal choice, not as a binding obligation. Circumcision for converts and newborn babies again became virtually mandated.

Let’s try to untangle the complexity of Jewish approaches to the commandment of circumcision.

Nechama Leibowitz, Israeli Bible scholar and commentator, wrote a comprehensive review of circumcision in Jewish thought. Among others, she cites Isaac ben Moses Arama, a Spanish rabbi and author of philosophical commentary to the Bible ‘Akedat Yitzhak’, who takes a medical approach to the commandment saying that ‘evidently, timely circumcision prevents diseases’[v].

Naftali Zvi Yehuda Berlin, a dean of the Volozhin Yeshiva in Lithuania, in his work ‘Ha’amek Davar,’ disagrees with medical explanation of Brit Mila. He draws a verse from Genesis ‘And it shall be a token of the covenant’[vi] and claims that circumcision should be understood as a ‘mark of the Almighty’s alliance with you, and not as a prophylactic remedy’

David Kimhi, a medieval biblical commentator and philosopher also known by the Hebrew acronym as the RaDaK, compares the Jewish commandment of circumcision to tzitzit and tefillin. He takes a different approach: ‘mitzvot shall be a token of remembrance. However, being imprinted on the human body, it is the strongest sign of all… The Brit Milah, by reminding the Jew of the Divine commandments when about to transgress with that organ, will prevent him from sinning’.

Maimonides sees it as ‘the physical sign as a unifying factor for all those who believe in the One God’[vii].

Altogether we can see a wide range of understanding of the same commandment – medical, covenantal, ethical and social. It seems important to Jewish thinkers to see commandment as something which elevates carnal activity to the higher level of a human existence. However, such an ambiguous act of unnecessary harm was often perceived as questionable from outside the Jewish world.

Thus, in Hellenistic times, Jews encountered the mockery of Gentiles who believed circumcision to be an unnecessary and unseemly mutilation and, therefore it was widely neglected. There is a story in which Rabbi Akiva was engaged in a debate about circumcision with Turnus Rufus, a senator and provincial governor under the Roman Empire.[viii] Turnus Rufus challenged Rabbi Akiva with a theological question: If He (God) requires circumcision, why does not the child leave the mother’s womb circumcised? Rabbi Akiva replied: Why indeed, does the umbilical cord come out with him and he is suspended by his navel and his mother cuts it? As for your query why he is not born circumcised, this is because the Holy One Blessed be He has given the commandments for the sole purpose of refining our character through them. So, according to Rabbi Akiva, Brit Milah is designed to improve on creation, sublimate nature and elevate it to the level of the super-natural.

It seems that questions about the meaning of religious circumcision were vibrant and relevant throughout all Jewish history. During the Modern era, in his essay “On the meaning of the key-words in biblical stories,” Martin Buber compares circumcision with the story of Noah and the flood: ‘There (concerning the flood), though addressed to mankind at large, it is a visible, cosmic and transient sign, whereas here (Circumcision), the symbol of national identity, is discreet, physiological and permanent; there the occasional sign is God’s work, here it is performed by man.’

We cannot ultimately derive one ‘right’ answer about Brit Milah from Jewish traditions, ancient or modern. However it is important to realize that there can be more than one understanding of a law and a tradition. Perhaps the important message of the story around the circumcision debate is that there can be and should be a human attempt to prevent diseases, to see ourselves in alliance with God, to remember the ethical responsibilities of people to each other, to find something which unifies us, refines our character, and, finally, to find something which expresses our unique Jewish identity. As we face the challenge to circumcision in Iceland and elsewhere, we can approach this question as progressive Jews with an awareness of all of the debates of our sages as well as our modern understanding.

[i] To read more visit the following link: https://www.nytimes.com/2018/02/28/world/europe/circumcision-ban-iceland.html