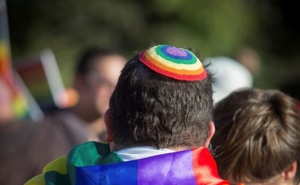 God is the reason I am gay

I am not making any claims about how God made me or what plans God had in store. I have no idea whether my personality was predetermined. I do not have any opinion on whether I am gay because of nature or nurture. I stopped caring about that a long time ago.

Growing up, there were many reasons I ought to have felt shame. In the 1990s, there was widespread public panic about gay men. I remember as a child opening up a ‘dictionary of new words.’ On one of the first pages was AIDS, whose entry redirected to ‘Gay-Related Disease.’ News stories proliferated about gay men grooming children, having sex in toilets and ruining families. The public image, only 20 years ago, was that gays were dirty, lived in sewers, and spread disease.

Synagogue was a place where I felt safe. In the small shul in my provincial town, I found serenity. And I heard religious leaders and cheder teachers speak about the innate dignity of all human beings; the Divine spark that permeated through everyone; the obligation to protect the stranger and the vulnerable.

The first time I ever heard an adult defend gay rights was in a community member’s living room. I must have been 11. Recently, a local parliamentary candidate had been outed after he was found having sex in a public toilet. Someone said something homophobic – I don’t remember the details.

A middle-aged Jewish woman leapt to the gay man’s defence. She spoke with absolute passion. She laughed when one of the homophobes said he had a gay friend. She was a grown-up telling off a bigot, and she rallied the rest of the room behind her.

As a young queer boy questioning who I was, I looked up to her and thought that was what Judaism looked like in practice. That was what it meant to defend the marginalised. I had permission – from her, and from the God in whom she believed – to be gay.

Gradually I came to realise that I was one of the people that the Jewish woman in the living room had been defending. I didn’t meet many other people like me until I got to university. When I did, I heard from many of them how religious hatred had hurt them and made them reluctant to be open about who they were.

I was grateful that I had known the true God. Progressive Jews worshipped the Source of love and justice, the universal God who did not judge, and who always stood beside the oppressed, and never sided with the oppressor. I thanked God for making me gay.

Later still, I looked around for role models. I wondered what gays could become. I knew a few celebrities existed, like Graham Norton, Elton John and George Michael. But my greatest comfort was knowing that there were gay rabbis. Rabbis like Lionel Blue.

As I looked for purpose in my twenties, I had an inspiring lesbian rabbi. I realised how much strength and joy a synagogue could give, especially to future LGBT kids. I decided I had to create that safe space for others. So God made me gay and, in turn, being gay made me seek out God.

That is the power of religion. Done right, it can affirm people when they are weakest. It can give hope to children that people like them deserve defending. It can be the champion of all who are suffering. It can be the cause of their liberation.

Apparently it is called ‘conversion therapy.’ In this practice, authority figures tell LGBT people that they can stop them being trans or turn them straight. They convince them that if they suppress their personalities, conform to rigid gender roles and only love who they are told, they will be healed. And they do so in the name of God.

And this practice is legal. In Britain. Today.

It is even practised within the British Jewish community. Recently, LGBT people have come forward to share their traumatic stories of how they were manipulated into believing they could be ‘cured’ of non-conformity. They were convinced that if they failed, they would lose their family and community for having let down God.

If queer-affirming religion can make me the person I am today, imagine the damage it can do to teenagers struggling to work out who they are.

As the possibility was raised that this cruel practice could be stopped, a coalition of evangelical churches comprising thousands of members published an open letter saying that banning conversion therapy would effectively outlaw their religion.

At Easter, Labour leader, Keir Starmer, went to one of those very churches to give his festive address. In response to the consternation this provoked from LGBT people, Stephen Timms, a Labour MP, tweeted in support of the homophobic church.

The two most recent prime ministers, Boris Johnson and Theresa May, had both visited this church too, causing outrage. The former Liberal Democrat leader, Tim Farron, recently accepted a donation of £75,000 from an evangelical church that lobbies in defence of conversion therapy.

When politicians spend their time and take money from homophobic religious institutions, they send out a clear message. They tell religious lesbian, gay, bi and trans people that they are, at best, indifferent to homophobia.

When public figures choose to attend these places of worship that claim they can cure gays, rather than any of the mainstream faith houses that embrace gays, they send a message about what they consider to be proper religion, and which God they think matters.

But it is possible to send a different message. We can say that conversion therapy is unacceptable. While banning the practice won’t stop it happening, it lets everyone know that it is not OK. Young people will still talk to their rabbis about how they’re feeling, but religious leaders should not be able to answer LGBT children by promising to take away their gay-ness or trans-ness.

Instead, they can give them a better message. Young LGBT people can grow up to see that their lives are sacred and deserve to be protected. They can know that they are wonderful as they are and do not need to be changed.

God is the reason I am gay, and I wouldn’t have it any other way.