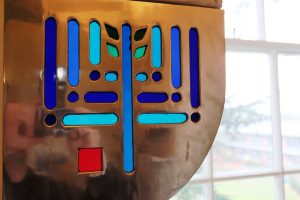 ‘See that you make them according to the pattern shown you on the mountain.’ Exodus 25:40

The final verse of the second recommended reading for this week in the Liberal Judaism lectionary. It follows nine verses describing in intricate detail the lampstand that Moses is to make for the Tabernacle, together with its accoutrements; its tongs and snuff dishes, according to the Soncino translation, itself best used with a dictionary! (What is a knop?) The image of a menorah is such a familiar one to us; from the synagogue, from the State of Israel and from Titus’ Arch in Rome, where it is shown being carried off as booty. Nevertheless, it was unfamiliar to Moses. He is confused, according to Rashi, and has to be reassured by God. ‘Here is a model of fire. This is what a menorah looks like!’

To a Leo Baeck student, the menorah is a symbol waiting to be discovered in the room of prayer. Some people notice it sooner than others, as I realised this morning after Shacharit. Monday to Thursday during term time, students, faculty and visitors come together to start the day with prayer and song. (Feel free to join us!) This morning, a colleague took out his Tallit from a bag embroidered with its own menorah: right-angled branches and four buds upon the centre stem. ‘That’s the old college logo!’ I exclaimed. After four and a half years at LBC and the erstwhile owner of one or two Kippot with the same logo, I knew. The menorah is everywhere in the room. I counted eight different examples: forming the front of the reading desk; beneath the ark; carved into the backs of chairs; sewn onto cushions and a long curtain; engraved on the glass doors of the bookcase; painted on the canopy which extends over the centre of the room and worked into the metal window surrounds. Actually, the number is currently twelve! Showing our photographer, Jarek, around, to discuss images for the Facebook page, we found four more: on the ark doors, where the menorah resembles a tree; in their square handles; within a disused reading stand and on the spines of old copies of the Liberal siddur! (The letters ‘ULPS’, the Union of Liberal and Progressive Synagogues, were once the branches of a menorah.)

It is a beautiful room, with much else besides menorot, including calligraphy on two of its walls: selected aphorisms from Pirkei Avot and verses from the Psalms. The artists, Roman and Aviva Halter, were responsible for the overall design. In recent months and years, new things have accumulated, which have added to its character. The sculpted head of the late Rabbi Lionel Blue, seen on the cover of one edition of his book, A Backdoor to Heaven, sits on the mantelpiece. Sometimes he is wearing a kippah, sometimes not! Next to it is a photo of Sheila Shulman and her framed ordination certificate. She was not a fan of the décor, to be honest. (She would want me to be honest!) Still, I think she would approve.

Thus, we ‘worship the Eternal One in the beauty of holiness’ (Psalm 96:9), surrounded by specially designed and crafted objects and fittings. They resemble some of those connected to Moses in a section of the Torah with which we struggle annually. Why do we? We are Liberal and Reform Jews, not iconoclasts or seventeenth century Puritans! Abraham Avinu was a smasher of idols, according to Midrash, while Moses built the Tabernacle and Solomon the Temple. Our own homes, synagogues and rooms of prayer are meant for people, fully embodied and appreciative of an aesthetic which need not be bare or plain. Instead, it can be warm, vibrant and welcoming. Of course, the welcome will depend on those inside. We can enjoy the work of our hands, the skill and inspiration of artists and craftsmen; even acknowledge God’s part in it, which this week’s Parashah allows us to do. The danger lies when we lose sight of God’s Creation in nature and in all life.

If we reflect upon the Torah, it probably won’t be on portions such as Terumah. It will be on the great family and national narratives, the law code and the model of love and ethics presented. As I approach the end of five years’ rabbinic training and think about the room of prayer, which is really at the heart of the college building and experience, I think about the people who have passed through, who have passed on and who are there now. I think about the atmosphere of love and support, and remember the challenges we have faced and come through together. Finally, I think about sitting next to an open window, feeling the cool morning air, looking out upon the tall trees at the back of the Manor House and listening to gentle bird song. Like many, I prefer the opening to Genesis over the second half of Exodus. Nevertheless, each offers a window, or a door, to that which is above and beyond.