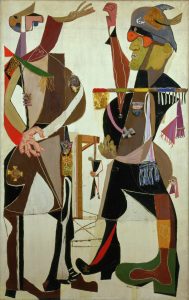 Spending time both in the UK and on the continent allows me to observe alternately the concerns of those who live on either side of the Channel. What are the headlines and what does the Jew in the pew comment on?

On the French shore, two events, virtually anecdotes, made the headlines these last few weeks. The first relates to the decision to re-publish, more than 50 years after the author’s death, an anti-Semitic pamphlet by the renowned author Louis Ferdinand Céline. It was to be published with educational comments, similarly to Hitler’s Mein Kampf several years ago, by the prestigious Gallimard Publishing House.

Following the outcry raised by this news in Jewish and non-Jewish circles, Gallimard apologized and decided to cancel its project. These pamphlets were available for years on the internet thanks to a Canadian publishing house, with no turmoil….

A few weeks later, the second event that came to the forefront of the news concerned a former philosopher and journalist: Charles Maurras. In the 1930s and 1940s, he was the editor-in-chief of ‘Action française’, the strong arm of the far right propaganda in France. He also inspired the anti-Semitic policy of the Vichy government. In 1945, Charles Maurras was sentenced to life in prison and was stripped of his civil rights.

On the 150th anniversary of his birth, the current Ministry of Culture had planned to add him to the list of people who were to be commemorated in France. After a second round of polemics on Twitter, the Ministry of Culture admitted that this decision will not serve any educational purpose and decided to withdraw Maurras from the list of those to be officially commemorated.

These two stories bring us back to the grim pages of French history. They have in common both how people today relate to history but also to collective memory.

Memory is the scum that remains at the surface, sometimes affixed to our cells, more stubborn than historical facts. It is an emotional reaction to the echoes of the past.

This Shabbat is called ‘Remember – Zachor’. A few days before Purim, when one plays in Purim-spiels, drinks a bit too much alcohol and reads the Megillah of Esther, one celebrates the victory of the survival of the Jewish people in the diaspora – Persia.

The Megillah is also part of our memory, it is our antidote to fear. Haman, this cruel vizier of King Ahasuerus, who wanted to exterminate all the Jews, is described in the the book of Esther as a descendant of King Agag, an Amalekite. It ends with a return to better fortunes for the Jewish people, thanks to Esther and Mordechai, and eventually Haman and his children are hanged.

Wrongly considered to be a children’s festival, we adults should read the book of Esther more carefully, especially the end, its most disturbing section. It recounts the massacre perpetrated on the Persians: men, women and children, by a vengeful people. According to biblical scholars, Esther is not based on any historical fact. However, the story taken literally has had dreadful repercussions, as on Purim 1994, when Barukh Goldstein carried out a massacre in Hebron.

Haman’s ancestor Amalek is recorded in the Torah as the relentless enemy of Israel, a sort of monster rising in each generation. We are to read his story in Deuteronomy every year as part of Shabbat Zachor.

Why is Amalek worse than others? Why does our tradition tell us that he will come back and threaten each generation and his name is to be wiped out? Is it a form of collective paranoia?

We need to analyse the three occurrences of Amalek in the biblical narrative in order to better understand its meaning.

The first is in Exodus 17. Joshua wages war against the Amalekites at Refidim. There is a famous scene where Moses raises up his staff in his arm and with God’s help enables the Hebrews to win the battle. Once the Amalekites are defeated, God asks to register this name in a special book of memories. And He will wipe out Amalek’s memory.

The second story in Deuteronomy 25 contains more details: Amalek is a coward that strikes from behind the weakest among the Hebrews: the women, the children and the elderly. For this reason, once the people arrive in the land, they will have to obliterate the memory of Amalek from under the heavens.

Finally, the third occurrence about Amalek is in 1 Samuel 15. Saul, first King of Israel fights against the Amalekites that he must completely destroy. But he does not follow God’s command and spares their King, Agag. Samuel, the last judge of the Bible is furious, and decides to eradicate himself the last and most prominent Amalekite.

These texts are like intertwined commentaries. For example the verse: “and you were tired and exhausted, and did not fear God…” (Deut.25:18) is ambiguous. Who does not fear God: the wicked Amalek or the people of Israel? The sentence construction leaves room for hesitation: is the eternal enemy of the people among us, or even inside ourselves? Or is he outside? Some Midrashim commented at length on this contradiction.

On the other hand, what does the double injunction: remember … do not forget: Zachor… lo tishkach mean? Why do we have this repetition? How can we feel and live as free people under this double yoke that commands us to ruminate on our memory?

There are four significant stages in a therapy that can help us understand what the Torah is trying to tell us.

During the first stage, the patient acknowledges his suffering, but he is locked in himself. He remembers and often blames himself for what happened. During the second stage, he feels able to face the other and thus, learns things about himself. The third step allows him to recognize his uniqueness and build his identity. At the end of the therapy, the patient will be able to rebuild the relationship and cooperate with the other.

Thus, we relate to our (difficult) memories in a different way over time, at first they trigger our sensitivity, then they become more peaceful and there is a form of reconciliation.

We are commanded to remember. Remembrance does not consist in resentment but in re-constructing oneself and one’s relationship to the other.  Remember: Zachor, do not abandon yourself to your memories: lo tishkach.