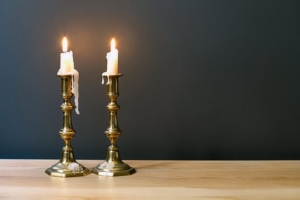 Parashat Tetzaveh starts with instructions for the lamps in the temple. It asks the children of Israel to bring clear olive oil. The commentators in the Etz Chayim chumash explain that the clarity of the oil can be understood symbolically. It is clear of vices like greed, pride, selfishness and jealousy. What is more, because olive trees take a long time to mature, they need a time uninterrupted by war. Just as olive branches, olive oil can also be a sign of peace.

Of all the commandments with regard to the tabernacle, we have kept only this command: to let a lamp burn eternally or to kindle a lamp regularly. The command is presented as an eternal light, a ner tamid, in synagogues and also in the regular lighting of candles on Shabbat evening, when our houses continue temple tradition and become temporary places of holiness.

I find that my thoughts keep returning to this image of kindling light. Yet, on Friday morning I had started writing about something else. Parashat Tetzaveh has often been understood to be about leadership and it seemed an appropriate topic for this week in Britain, as the parashah offers different models of good leadership. With its focus on Aaron and his sons rather than on Moses, it has been understood to argue for a healthy division of leadership tasks. Moses’ unusual absence has been read as a warning against the idolatry of leaders. Unlike other cultures, we do not make leaders into demi-gods.

The subject of leadership had also introduced itself earlier, when I was listening to an interview on the radio. The interview was not really a conversation, but resembled more a game I played as a child, called “Yes or No”. The rules of the game are simple. One person asks a question and the correct answer avoids using the words ‘yes’ or ‘no’. Question: ’Are you reading this on Thursday afternoon?’ Correct answer: ‘It is Friday today.’

On the radio, the interviewer pressed the interviewee for a statement that would become the soundbite for the next news bulletin, while the interviewee tried to avoid saying yes or no. I often sympathise with the subjects of such interviews, but in this case there seemed no need to play the game. The answer was not difficult. So, I was inspired to write about leaders taking a stance and about creating spaces where it is possible to do so. I even had some jokes. Then, a few days later, I looked on my phone and politics had taken another ugly turn and I was no longer sure where I was.

Yet, the kindling of lights on Shabbat is not just comforting. It signifies the distinction between the first six days of the week and the seventh day. As Abraham Joshua Heschel writes: ‘on the Sabbath we try to become attuned to holiness in time. It is a day on which we are called upon to share in what is eternal in time, to turn from the results of creation to the mystery of creation; from the world of creation to the creation of the world.’ For six days, God saw that what was created was good. The seventh day God made holy. (The Sabbath, pp. 10, 75)

Because it comes out of holiness, we cannot claim this stance as our creation. Nor is it ours to abandon. The tabernacle was created after the children of Israel had promised to become a holy nation, yet without knowing what it was to be a nation and what it was to be holy. So, the tabernacle was created in all its beauty and with its elaborate design and unusual material to try and bring people together in a way that acknowledged the sacrosanct.

When the light of the candle has long dwindled, we return to the world of creation. To a world that needs not just good instruction, but also a sense of the sacrosanct. The sense to know when to play a game and when to take a stand. The lighting of a candle may attune us to such a sense. It is up to people to bring the pure olive oil to kindle the light. Regularly.