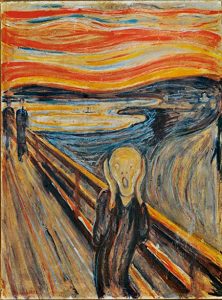 Since the Pittsburgh shooting there is an image that’s been haunting me, the famous painting ‘The Scream’ by the Norwegian expressionist Edvard Munch[1]. At times there are no words to describe what we feel, and our grief and anger are so deep that they can only be expressed through a big scream.

We usually shout out of despair and rage in front of suffering and injustice. I am very familiar with these emotions. No wonder then that I feel empathy for Esau and his “wild and bitter outcry” (Gen. 27:34) as it is written: וַיִּצְעַק צְעָקָה גְּדֹלָה וּמָרָה.

The dramatic and familiar story unfolding in front of our eyes is that of a favourite son, Jacob, manipulated by his mother, Rebecca, who is on a mission and wishes to fulfil the prophecy she received from God. She wants Jacob to acquire Esau’s birthright. But this is not enough, Jacob needs also his father’s blessing, the priceless almost magic blessing of the Patriarch,  Isaac.  When Esau comes to his father’s deathbed, bringing his favourite dish, Isaac, who had some suspicion about Jacob’s voice when the latter pretended to be his brother, eventually understands the deception, but it is too late. And Isaac maintains that he cannot withdraw his blessing from Jacob.

It is at this very moment that Esau expresses his huge anger and despair, unable to understand why his father withholds his blessing from him.

The first occurrence of the verb צעק, which means to shout, or yell, or protest appears in the dramatic story of Cain and Abel, after the fratricide of Cain against Abel. It is God who addresses Cain reprimanding him :

‘your brother’s blood cries out to Me from the ground’, קוֹל דְּמֵי אָחִיךָ צֹעֲקִים אֵלַי מִן הָאֲדָמָה,  (Gen. 4:10)

How can the blood cry out from the earth? The metaphor is stunning. According to rabbinic commentaries nothing can atone for a capital case, even the land is blemished and as it is stated in the Mishnah[2]:

‘The blood of the victim and all his future offspring hang upon you until the end of time’.

There are many similarities between the two biblical stories. The most obvious is the description of fraternal jealousy and competition. The dissimilarities are numerous as well. While Cain and Abel’s story ends with a murder, Jacob and Esau’s account ultimately ends with reconciliation and parting of the ways.

The Torah lecturer Avivah Zornberg[3] in her commentary points to the rabbis’ criticism of Jacob. They disapprove of his behaviour, his duplicity and above all, the fact that he mimics his brother’s voice.

Each person has his or her personal voice-print, it is a very distinctive feature even between twins. This identity abuse is considered similar to idolatry in the Talmud[4].

According to the midrash this sin receives retribution in a later text, in the book of Esther where a similar expression appears, the only difference being that the verse uses a synonym to tsaaka – zaaka:

On hearing the edict to exterminate his people, Mordechai is in mourning: he tears his clothes, put on sackcloth and ashes and then cries out. This decree is Jacob’s payback for abusing his twin brother.

There is another identical wording צעקה גדולה – big shout, twice in the story of the tenth plague[5]. The big outcry of the Egyptians happens after the killing of their firstborn.

From this textual analogy, we can infer that Esau is experiencing a theft of identity, he is symbolically murdered by his brother. His outcry is a sign of tremendous sorrow that continues the cycle of violence, which started with the first biblical brothers.  The fact that their fate and even character is predestined from the womb by God leaves them with no room for living in a more harmonious reality. They are labelled: Esau is the rasha – the wicked and Jacob the tam – the pure or naïve one, and these stickers seem to follow them all their lives. Who is to blame: Isaac and Rebecca, themselves, the rabbinical interpretation?

The repetition of dysfunctional siblings’ stories in the Bible raises the question of predetermination. How do we find a way out of violence and revenge? How do we recover our voice, expand our perspective in order to be responsible of our own story, and concerned by the other’s suffering as well?

This Shabbat we are commemorating the provisional end of a horrendous cycle of violence. November 11th marks the centennial anniversary of the armistice of the First World War. While November 9th marks, symbolically, the beginning of the most dreadful cycle of violence against Jews that started eighty years ago with the Kristallnacht.

At this very moment, we have to confront an unpredictable new wave of antisemitism in Europe as well as in the United States. What creates a more complex reality is that there is also an intolerable Jewish support of populism and racism. This is a moment when a loud progressive, (allow me to use the word) prophetic voice has to be heard wherever incitement, hatred and violence are prevalent. Resistance is a matter of survival.

[4] BT Sanhedrin 92a And Rabbi Elazar says: With regard to anyone who amends the truth in his speech, it is as though he worships idols. As, it is written here, in the verse where Jacob sought to resist taking his father’s blessing from Esau: “And I shall seem to him a deceiver” (Genesis 27:12), and it is written there with regard to idol worship: “They are vanity, the work of deception” (Jeremiah 10:15). (Sefaria)