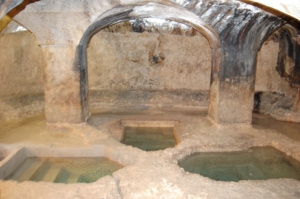 This week we read from Parshat Toldot, of Generations, and that is indeed the theme of our reading. What are the dynamics at work between generations, their particular havocs and reconciliations? Isaac has brought his family to Gerar, fleeing famine. He is alone, pressed from above and below. From below, in the economic and emotional obligations he bears to his wife and children; from above in the vast shadow of his difficult father Abraham; who, our commentators tell us, has died some three years before. Isaac is a mourner, a refugee. When he arrives in Gerar he is faced by Avimelech and his cronies; when he is looked up and down by this hostile king of the Philistines and asked of Rebecah, ‘Is this your wife?’ – he responds, simply but dishonestly, achoti hi – she is my sister.

Of course, we rather knew this was coming. After all, we have seen the pattern twice before, in Parshiot Lech Lecha and Vayera. We know that when a powerful ruler asks a patriarch whether the beautiful woman with whom he appears is his wife, what he really means is: do I need to kill you so that I can keep the woman? And we know what Abraham has done twice already, the same wife-sister swap. Still, whatever God’s previous record in stepping in to save these abandoned wives, the story leaves a sour taste. Perhaps Isaac’s revealing the truth would only have got him killed, and not left Rebecca in any more savoury a situation. Still, abandoning her feels at best optimistic and, at worst, deeply, immorally cowardly. In any case, presented with a moral puzzle, Isaac’s best bet seems (to him) to be doing exactly what his father has done before. It is an inevitable if still disappointing aspect of the biblical narrative that Rebecca’s views on the matter are never revealed; except perhaps at the end of our parashah, when she sides with Jacob against his aging father.

Once God’s ex machina intervention has restored Rebecca to Isaac, he is faced with yet another trial. The wells dug by his father during his own sojourn in the valley of Gerar have been filled in by the Philistines, who are apparently hostile to the idea of refugees finding any comfort in their home. But Isaac knows just what to do, which is, again, exactly what his father has done before him. He digs out the identical wells, gives them the identical names, settles in precisely the same spot where his father had settled.

It is only when Isaac has grown rich, when he has a grander operation to run, that the resources upon which his father relied seem inadequate. He has to strike out on his own; he has to dig his own wells. Like any major construction project, he runs into opposition from the locals: wound up beyond regulation NIMBYism by the additional irritation of this flourishing businessman being a pesky Hebrew. Isaac’s first two wells are clearly shallow resources, not worth the trouble he puts into them: he names them Esek and Sitnah; enmity and strife. But with his third effort something extraordinary happens: no longer are his servants digging a simple well, they have struck a deep reservoir. The locals are no longer incensed, they have made peace with the Hebrews’ presence. He names the new well Rehovot, spaciousness. For now God has, at long last, given us space to get along, and we will be fruitful in the land.

Following his father’s example has brought Isaac so far; it has saved him from Avimelech albeit at the cost of some moral integrity; and it has given him some first loci to begin digging wells in the new valley. But it has not been enough: he has to strike out on his own, and it is only through this that the adequacy and abundance of the land is revealed. When Isaac is digging his own wells, he strikes the Be’er Mayim Chayim, a well of living waters. I wouldn’t be the first to draw the analogy between the living waters which Isaac finds when he sets his own course, and the obligation on all of us not only to appreciate the roadmap given us by former generations, but also to be fearless, determined and principled in finding our own course, digging for fresh waters.

The concept of Mayim Chayim, of living waters, is given halakhic, legal ramifications in the laws of mikve’ot, the ritual baths in which Jews are cleansed. These cannot be stagnant. To offer purity, to make something fixed out of that which was broken, mikve’ot need to be drawn from flowing, natural, living water.

The association of living water and mikve’ot is given further significance by the prophet Jeremiah (17.13), who describes God as the mikveh of Israel; a conceit developed by Rabbi Akivah into the grand promise that, just as the mikveh purifies the impure, so can God, in some sense, act to purify us. Those who abandon God, Jeremiah teaches in words Isaac would recognize, have departed from the source of mayim hayyim, living waters.

In the Creation story itself, in only the 9th verse of the whole Torah, the first gathering of waters together is the construction of a mikveh: And God said, let the waters be y’kavu – that is, let the waters be made into a mikveh – under the heavens, in one place; that the dry land beneath will be seen.

Waters of life, living waters, mikve’ot, cleansing what has been dirtied, making pure that which has been sullied; the mikveh which is all water and the mikveh which is all God. These words and concepts are intimately intertwined throughout Tanakh. And I’d like to bring them to bear on our reading of Isaac’s story. His relationship with his wife is sullied by his conduct in the court of Avimelech. He is surrounded by aggressive and cruel neighbours, he is mourning for his father. His second son has sided with his estranged wife. His eldest son has left his paternal faith, and according to the rabbis, is a cruel and hard hearted individual. But he strikes out and finds water, living water, a mikveh, a purifying space, and with that he is cleansed. A landscape which seemed cruel and hostile now seems spacious and hospitable.

For now God has, at long last, given us space to get along, and we will be fruitful in the land.

Like the fresh and all encompassing feel of sea-water against our skin; the story of Isaac compels us to seek in Torah, even in God, something which will allow us to feel refreshed and whole again. Over the coming weeks, we may need it.