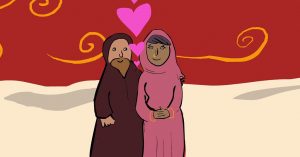 Last week, a miracle happened on the Edgware branch of the Northern Line. It was a small, ordinary kind of miracle, but a miracle nonetheless – one brought about in part through the power of Baby Shark (a particularly catchy popular children’s song!).

Over the space of two, maybe three, Tube stops – through one complete run of Baby Shark, and one as far as Grandma Shark – three children around four years old went from being complete strangers to singing and laughing together. They sang, they wiggled in their seats, and they knew absolutely all the hand gestures. Three children laughed for sheer happiness, not because of any specific joke; they made a rainy Tube carriage a happier place, just for a few moments.

It may even have been the beginning of a beautiful romance – based on some of those glances – but that wasn’t the miracle. The real miracle was that the sound of children’s laughter caused several grumpy commuter adults to look up from their phones and smile…

When it comes to laughter in Torah, there’s a deep irony in the fact that the man whose name means ‘he will laugh’ actually has very little laughter in his life. In Parashat Toldot we see Isaac having survived being nearly sacrificed by his father, then facing childlessness, followed by feuding sons, and his own blindness. Not much to laugh about there.

In the middle of the parashah, however, there is a brief moment of relief. Like his father before him, Isaac attempts to pass Rebekah off as his sister, so that other men will not kill him to possess his beautiful wife. Unlike his father, Isaac’s ruse is exposed not through divine intervention, but through his own behaviour – and it’s lovely behaviour. Genesis 26:8 says that Abimelech, king of the Philistines, looked out of the window and saw Yitzchak m’tzachek eit Rivka ishto – Isaac playing or laughing with Rebekah. It’s the intimacy of their fooling around that gives then away to Abimelech, but it’s the unexpected moment of happiness that might make us pause here.

There’s a real beauty in the fact that when Isaac finally gets his chance for laughter – when he’s getting quite old – it’s with his wife of several decades. Imagine a laughing, playful relationship between Isaac and Rebekah, and perhaps we can get a slightly different sense of this (as we learned on Monday) often-overlooked patriarch. We might imagine a couple who help each other through the tough times – bereavement, infertility, fighting children – but also retain the ability to bring each other joy. Sharing a sense of humour, having someone with whom to chuckle at life’s absurdities and laugh for sheer joy in the moment – these are fine qualities in a companion.

Even if the good times are much rarer than the hard times, it seems that they retain the ability to embrace those moments and each other. Rebekah and Isaac’s example might suggest that joy and laughter need not be a betrayal, a denial of our all-too real troubles and pains. Our grief is no less real for our human ability to feel moments of happiness and connection. We all remember the smashing of a glass at Jewish weddings, adding a touch of sorrow into a joyful occasion; we may need reminding of the times that we have laughed at a shiva, even as mourners, when just for a moment, we’ve known a touch of joy amid our tears.

Isaac’s life was marked by tragedy and beset by difficulties. Our own lives are rarely easy, and opening up a newspaper or news feed on pretty much any day at the moment can make us too feel like life is empty of causes for laughter. Yet without resorting to Baby Shark singalongs, or with them if that’s what you’re into, perhaps we can find moments when, like Isaac, we can take our turn with moments of laughter. As we enter the month of Kislev, may we each face the longest nights of the year – and the chilly winter daytimes too – with someone with whom we can laugh. May we remain open to the possibility of flashes of light in our times of darkness. May we live to know times when there are only moments of sadness among our laughter. Hodesh tov!