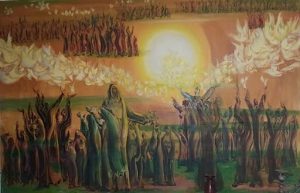 How will we know when the crisis is over?

How will we know when this crisis is over?

Because this crisis will end. Every catastrophe there ever was has been brought to closure at some point.

Wars have begun with shots fired on foreign shores and ended with neighbours kissing outside their front doors.

Our scientists have conquered tuberculosis, leprosy, HIV and polio. It may take months and it may take years, but they will find a cure and people will recover.

Humanity has survived ice ages, famines and nuclear meltdowns. And it will survive this. This crisis will, one day, be over.

And when it is… how will we know?

The ancient world had rituals for bringing every ordeal to a close. When the sick returned from their quarantine, they were ritually bathed seven times, given new clothes, and shaved from head to toe.[1]

We, too, will wash ourselves anew. We will look at water and soap differently. We will cry in the shower to produce as much water as possible, knowing that those cleansing droplets are the secret to life itself.

And we still won’t know whether the crisis is over.

The priests of the bible would perform ceremonies to indicate that closure had occurred. On recovery from sickness, they would give offerings of unleavened cakes, fine flour, oil and animal blood. They would thank God for their health with their sacrifices.[2] They would wave their hands in the air, bringing the ingredients together, embodying their wholeness.[3]

We, too, will make offerings. We will return to reopened pubs and put our glasses in the air and celebrate our survival with pints of cider and drams of whiskey and we will say ‘l’chaim’ like we never knew what it meant to say ‘to life’ before.

And still we will not know whether the crisis is over.

Our rabbis knew how to mark transitions with words. When good things happened for the first time in a long time, they instituted that we should say “blessed are you, Eternal One our God, Creator of the Universe, who has kept us alive and sustained us and allowed us to reach this season.”[4]

And we won’t know whether the crisis is over.

We will cry in the streets in funeral processions for all those who never had the chance to mourn properly on lockdown. We will wail without abandon for every life taken too soon. Every life that will be taken will have gone too soon. We will huddle together in houses and let out all our sadness and anger.

We will feel guilty. Because, after all, feeling guilty is a part of grieving and surviving isn’t always such a cause for celebration. And although we will not believe it at first, we will recover. And we will move on.

And we still will not know whether the crisis is over.

Because the crisis will not yet be over.

If we leave our houses and go back to our old jobs to pay rent and mortgages in the same houses to barely survive in the same cities, Coronavirus will not have been defeated. We will only have signed an armistice with sickness, knowing that another plague will face us again. This will not be the last virus. Any effort to return to normality will only exacerbate the problems that have gone before.

Never again will we fight each other for dried pasta and toilet roll and sanitary pads and formula milk. Never again will we stare into our cupboards and wonder how long our tinned food will last us. We cannot ever return to the days of scarcity.

Before we can begin to move on, we have to be assured that all of humanity’s basic needs will be met unconditionally. Healthcare, food, water and clean energy will be considered human rights. When we struggle for them, we will struggle for everyone to have them. We will insist on it the way that world leaders pledge at the end of wars never to pick up weapons again, only this time we will mean it.

And still that will not be enough for us to say that the crisis is over.

And that won’t be enough for us to say it’s over.

Because there are today vulnerable, elderly and disabled people who are saying that self-isolation was already their standard practice, and that they did not choose it voluntarily. Because there are sick people who already feel like they are a burden to society when their lives are a gift from God. Because there are families torn about by borders and there is escalating racism that makes people feel even more afraid and we know that loneliness and bigotry and fear make life unbearable. We will judge our society not by the strength of its economy but by the strength of its weakest members. Only when we are assured that the value of human life is unquantifiable will be able to draw a line under the past.

And that day will come. This crisis will end. Every crisis that ever was has come to an end.

And we will mark it. Every human being who is alive will sign a new international constitution, swearing allegiance only to each other and to God. And we will swear to protect everything that lives and the precious planet that sustains it. And on that document we will enshrine rights we never thought possible. And it will be the benchmark for everything that comes afterwards.

And everyone, all around the world, will subscribe to it. And we will know beyond all doubt that this crisis is over.