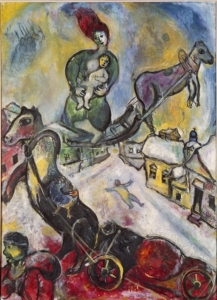 War in Ukraine: ‘My fear is that I may lose my family any minute’

Tsav is one of those portions that bring bar/bat mitzvah students to grief, comprising in large part, an uninspiring, unappetizing list of liturgical instructions for ritual sacrifice. The rules are dictated in such painstaking detail and call for such meticulous adherence, that those of us prone to obsessive behaviour feel greatly relieved that we’re not expected to do any of it today, especially since the penalty for violating priestly protocol is grim. Anyone unwilling to stick to the script would have been well advised to back away from the Mizbeach or risk as  follows:

Help yourself to God’s offering whilst in an impure state? You’re cut off from your kin. (Lev 7:20)

Eat the fat left over from the burnt offering? Cut off from your kin. (Lev 7:25)

Indulge yourself on Yom Kippur? Cut off from your kin.

Not doing Passover this year? Cut off from your kin. (Numbers 9:13)

Presented as a consequence of violating a law or a command, to be cut off from kin seems to be a threat.

But it’s not. It’s a statement of fact. Each of the acts or omissions said to sever the ties of kinship pertain to covenantal practices that distinguish us from other people and bind us as kinsfolk in a distinctive relationship with God. We are kin as long as, and to the extent that, we conform to the laws of the Covenant.

And yet it sounds like a threat. Although there are bound to be family members we’d rather see less often, the dread we feel at the thought of being “Cut off from kin” is innate and atavistic. It’s a fear of being cut loose and cast adrift. Without kin, we’re unmoored. We have no home.

Robert Alter has us observe that as we move from Chapters 6 and 7 to Chapter 8, the style shifts from user manual for priests and supplicants, back to our narrative, the story of a man and his brother forging a new nation in partnership with and in service to, God.  At a glance, this chapter is hardly more captivating than the text that precedes it: verse after verse of ‘Moses did this, then Moses did that’, notable only for the appearance of that rarest of Ta-amim the Shalshelet (Lev 8:23). It’s asking to be raced over and through.

Please, though. Not so fast. Slow down and you’ll find yourself treated to some of the most tender moments in Tanakh. Read how lovingly Moses ministers to his brother and nephews, feel the gravity and deliberation of Moses’s motions as he drapes them in the vestments and anoints them with oil. This chapter captures a moment of unparalleled intimacy among kin.

A Parashah that seems at the start to have little promise of poetry, or pertinent insight turns out to be a paean to kinship, how it tethers us to our world, to God and to one another. Tsav makes us mindful that the bonds of family give us security, identity and a degree of peace of mind.

This year Tsav comes to us at a time when millions of people have been “cut off from their kin” by war. Fathers who’ve chosen or been conscripted to serve while their wives and children flee to who-knows-where. Parents who’ve lost children, children who’ve lost parents, grandkids who’ve lost grandparents who did not have the emotional or physical stamina to survive the bombings, the hunger and the cold.

In having us feel the kinship bond at play, Tzav’s account of Moses in spiritual communion with Aaron and his sons humanises Moses and deepens our appreciation of the blessings and gifts of kinship. Equally, it magnifies our fear of the void that would open if those kinship ties were to be severed, enhancing our empathy for those suffering that fate right now.

The victims of this war face another void, too. Not for the first time in human history masses of people will ask, “Where is God?”

It’s easy for us to say. God is in everyone who is providing material and moral support to the refugees: offering homes, food, medical assistance, companionship. God is with the Churches in bordering countries offering shelter and meals; God is with the Haredim who set up a relief centre in a Synagogue in Poland and invoking pikuach nefesh, kept their phones and computers open on Shabbat to help refugees—Jewish or not—find relatives or friends who could take them in. God is with the journalists who defy bombs and unconscionable acts of aggression from a deviant dictator to tell us the truth.

But is that enough do you think, to restore the faith of those bereft of family and home? I don’t. But if we, along with the legions who have leapt to their aid, continue to act, give and do with the compassion we draw from our reverence for kinship, we may be able to help restore in them and among ourselves, a sustaining faith in humanity, which would be for now, faith enough.