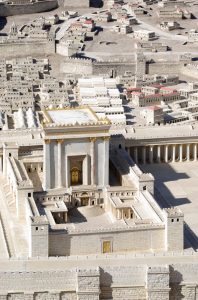 Why, in some prayer books, are the thirteen rules for interpreting the Torah located right after the rules of the offerings in the Temple? Here is a question I have been wondering about for years. If these two subjects were so close to one another in my old sephardi siddur, it may mean that Torah exegesis and sacrifices share some common features. Which ones?

I found this week further food for thought while studying parashat Tsav.

Keli Yaqar[1] started an explanation stating that, every person studying the laws of the holocaust is considered as if having indeed offered a Korban (holocaust). However, he later clarifies that this interpretation is valid only when we do not have a Temple, and thus, are unable to offer sacrifices – but when holocausts can be performed, Keli Yaqar holds that the performance of the act is more valuable than its mere study. Indeed, he stated that the word laylah (= the night), in the verse can refer to times of dispersion and oppression: in such periods, we cannot anymore perform sacrifices; but studying their laws is equivalent, because it would bring us to a similar state of mind.

It is true that, when reading about sacrifices, we often feel compassion about the animals brought as offerings. These saddening and disturbing thoughts can make us more conscious of the suffering we encounter in the world, and compel us to try and become better people towards others – and also towards animals and our environment.

It is also said in the Talmud[2] that the Eternal considers students of the Sages studying Torah in every place as if they were bringing offerings and burning incense. In the same way, those studying Torah during the night are considered as if they were performing the Temple rituals. If the students engage specifically with the laws of the Temple service, they are considered is if the Temple had been built in their days. According to Rava, everyone studying Torah would not need to offer a holocaust or a vegetal offering (= minha). Every person studying the laws of sin offerings would not need to bring a sin offering.

This passage of the Talmud seems to imply that, not only is the study of the laws of the sacrifices similar to their performance, but also Torah study in general.

But to what extent is Torah study similar to sacrifices?

Keli Yaqar gives another insight: the redundant words “this is the sacrifice” would mean that: “the one who studies the laws of sacrifice is himself the sacrifice.” He goes on explaining that Torah study weakens the strength of a person.[3]

Indeed, Torah study requires dedication to it; it takes energy. It can be well exemplified by the story of the encounter between Rabbi Yohanan, who lived in Palestine in the third century, and his future colleague Resh Laqish. They were both in the Jordan River; Rabbi Yohanan said to Resh Laqish: “Your strength [should be dedicated] to Torah!” And Resh Lakish agreed. When he made the decision to study Torah, all his physical strength left him. He had become so weak that he could even not get out of the river.[4] Thus, it seems that the rabbis in the Talmud think that Torah study is demanding strength and can be perceived as a kind of sacrifice.

Torah study is also comparable to sacrifices because it takes time. In ancient days, cattle, sheep, and other agricultural products were composing the wealth of the people. Nowadays, one of the most precious things we seek in our lives is time – thus, giving time for Torah study can be perceived as a similar thing as dedicating a lamb, a goat or an ox to the Temple.

One major goal of offerings was to deepen the relationship between the Eternal and the individual. We may imagine that, when a sacrifice was performed, the person seeing and feeling the life going out of the animal would stand in awe, thinking: “Now before your greatness,  Do I stand in awe and fear; All the thoughts that in my heart are hidden To your seeing eye are clear.”[5]

In the same way, when studying Torah and discovering an infinity of ways of understanding it, or enjoying a discussion on a complex Talmudic passage with a friend, we may feel a sense of wonder and of closeness to the Eternal. As did the sacrifices, Torah study can trigger reflections on ourselves, our lives, the world we live in and our relationship to others.

One question remains: how much should we dedicate ourselves to Torah study? Most of us have busy lives and many obligations, and we may not all be able to study Torah several hours a week. However, the Talmud says about offerings that, sacrifices taken from large cattle, from sheep or from plants are all pleasing in the same way to the Eternal. Thus, a little offering is as valuable as a big offering, provided the heart of the person who performs it is directed to heaven.[6]

[1]Keli Yaqar (“precious vessel”) is the commentary of Rabbi Salomon Ephraim of Luntschitz (1550-1619), as well as his author name. See his commentary on Leviticus 6, 2.

[3] When stating this, Keli Yaqar seems to refer to Sanhedrin 26b: « Why is her name (of the Torah) called tushia ? Because its [study] weakens the strength of the person.”