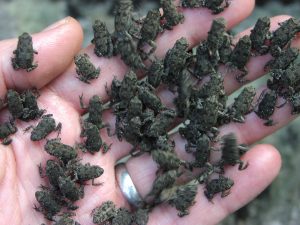 Were the plagues the work of Moses or of God?

On the one hand, it seems obvious: they were clearly supernatural, science-defying events and therefore of Divine origin.

But on the other hand they were almost all initiated by some physical act of Moses. To turn the Nile to blood he instructed Aaron to plunge his staff into the water.[1] To bring lice to the land he instructed Aaron to strike the dust with his staff, and behold, the dust turned to lice.[2] To infect the Egyptians with boils, Moses took a handful of soot and threw it into the air so that it would settle on the people and cause skin irritation.[3]

The plagues still must have been God’s work, because when I hold a stick out over a river, only rarely do frogs emerge from it. But then why did Moses have to do anything at all? God is clearly capable of imposing a plague of boils without human assistance. That is one of the perks of being God.

There was recently some research into the way that young people use technology,[4] and one of the researchers had had a chat with a child about their homework project. They pointed to a particular page and asked, “How did you take that photo?” “Oh,” replied the child, “I used an app called ‘Camera’.”

‘I used an app called “Camera”.’ They didn’t know that a camera was a thing. They didn’t recognise the graphic of a camera depicted in the app’s icon.

And this got me thinking about how many pieces of defunct technology are memorialised as symbols in the technology that rendered them obsolete. The ‘telephone’ icon on a mobile ’phone is an old-fashioned handset. The ‘TV’ icon is an old TV set with an aerial sticking out the top. The ‘voice memo’ icon is a cassette tape. The ‘stopwatch’ icon is an old analogue stopwatch with hands – I think even I’m too young to have ever seen one of them in real life. And, of course, the button we click to save a document or file is a picture of a floppy disk.

Why does cutting-edge technology – the antithesis of the floppy disk – continue to use these antiquated objects as symbols? I think it’s probably for the benefit of a particular demographic, of which I’m probably around the youngest member: I’m just about old enough to remember TVs with aerials but never really used one. But how do these symbols benefit those who are more familiar with floppy disks than with gigabytes and Dropbox?

It’s a subconscious reassurance. When you’ve typed a long document and want to make sure it gets preserved, you use the picture of the thing that – in your mind – is associated with preserving electronic documents. It so happens that that’s no longer how it works, but our minds don’t quite know that yet. Terrified of letting our hard work disappear into the ether, we reach for the familiar symbol of a trusty old floppy disk. The same goes for ‘the app called “Camera”’: when a moment comes along that we want to capture for posterity, our eye is drawn to a picture of the tool that, for decades, helped us to do just that. No old-fashioned cameras with flash bulbs and long lenses are involved any more, but the picture nevertheless brings home to us what is involved.

Ancient Egyptians grew up in a society filled with superstition and magic. We can all remember that iconic scene from the film The Prince of Egypt in which Pharaoh’s magicians sneered at Moses and replicated all his tricks: Aaron turned his staff into a snake; so did the magicians.[5] Thus Pharaoh rationalised for himself that the ‘miracles’ being offered by Moses were, in fact, not signs from a powerful foreign god, but simple tricks of a sort that his small mind could comprehend.

The Egyptians really had no concept of miracles. Everything could be achieved by sleight of hand, and a person’s ability to perform wonders by sleight of hand was what won them respect. The gods did their business through earthly intermediaries. Pharaoh’s magicians were the most important in the land because they could work the biggest tricks: no mere snake-charmers, they could actually turn sticks into snakes. The gods worked through human agents.

Natural events, then, were beyond the Egyptians’ mental horizon. A flood was just one of those things that happened – likewise a famine, likewise a period of plenty. Had God simply caused the plague of boils, or simply caused all the firstborn to drop dead, without the theatre of human agency being involved, it could easily have passed the Egyptians by. Instead of being A Sign, it would instead just be… a thing.

In many ways, then, Moses taking a handful of soot is like the floppy disk icon on an iPhone. Unnecessary, meaningless and ultimately arbitrary, and yet a vital way of communicating with an audience. With the drama of holding out a rod and having the waves of blood radiate out from it, Moses placed himself at the centre of events. He was the man – the visible man, who people could see and whose actions people could witness and understand and marvel at – whose command to his brother turned rivers to blood. No distant god he, to be incorporated into an already crowded pantheon. Moses was bringing his campaign to the people on their own terms. They wanted displays of magic, they got displays of magic. And they got them in a way that was direct and unsettling.

Moses is famous for suffering from a speech impediment. He gets less credit for finding a creative and effective way to communicate with the Egyptians in spite of it. He stood up against the almighty Pharaoh – with whom he had grown up – and did so successfully. The plagues were God’s. Their implementation was by Moses.

May we all, like Moses, find the way to make our voice heard, and to deliver our heartfelt message – even (and perhaps especially) if it is unwelcome. And let us say, Amen.

[4] Sadly I only heard about this second-hand so do not have a reference.