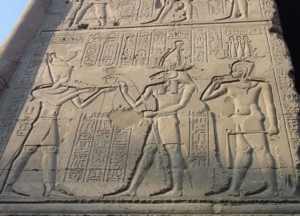 During the course of the past few years the human population has seen what many might want to consider plague after plague after plague, and that is of course before we even come to think about what’s going on in the world right now. Stronger-than-ever-before hurricanes, an increase in forest fires in the USA, Israel, and Australia, more coastal flooding than usual across the globe, and, because it wouldn’t be 2021 if I didn’t mention it, Covid-19 – some might be tempted to consider all of this an onslaught of biblical proportions.

Parashat Vaera introduces us to the first seven of God’s plagues on Egypt: water turned to blood, frogs, lice, swarms of insects, pestilence, boils, and hail. In the past, I have tended to ignore the plagues, and brush them off as a dramatic retelling by our ancestors who were describing their experience of uncontrollable acts of nature/acts of God that they were unable to explain.

I have seen rabbis and scholars alike using the plagues as a lens to examine climate change, based on what we now understand of climate science. I have further seen rabbis and scholars alike argue the very nature of the plagues themselves, noting that as well as being plagues, the Torah calls them “the strong hand”, “signs”, “wonders”, and “marvels”, and that there is much to be learnt from that. Several commentators on the narrative, perhaps the most famous of them being Nachmanides, have drawn attention to the retaliatory nature of the afflictions, and the former, remarking on Exodus 7:16, expounds that the divine “will begin to strike with several plagues, God was telling him [Pharaoh] that it is his wickedness that is causing him to bring punishment upon himself.” God is apparently retaliating for the maltreatment of the Israelites, and the plague of death of the firstborn later on in the story is a direct retributional consequence for the killing of the male Israelite babies at the start of Exodus.

I have, however, begun to view the plagues and the circumstances surrounding them as a window through which to observe my ever-changing, ever-growing relationship with God.

Torah shows us that broadly speaking, the plagues are a way for God to prove divine power, and dominance over the Egyptians, and over Pharaoh, their leader, but everything that is going on leaves Moses with doubts, and it is in Moses’ doubts that I feel some affinity.

Towards the end of last week’s portion, Moses bravely confronts God asking “why did you bring harm upon this people? Why did you send me? Ever since I came to Pharaoh to speak in Your name, he has dealt worse with this people and yet still you have not delivered Your people” and God effectively shuts him down by responding that he “shall soon see what I will do to Pharaoh: he shall let them go because of a greater might.” It is strange then that the beginning of our portion this week opens with the impression that a new conversation altogether is happening, but Rashi links these two events together, commenting on Exodus 6:2 saying that “God calls Moses to account for his harsh question” – rather like Rashi, I don’t yet want to let go of Moses’ doubts; God and Moses don’t have a perfect relationship, there’s work to be done, and that feels comfortingly familiar.

The Egyptian, and other Ancient Near Eastern cultures, almost invariably held that their gods and their rulers were inextricably linked, and thus were their respective powers. In the ancient Egyptian understanding of how the universe worked, this power was neither positive nor negative; it was instead a cosmic force that could be used to destroy or to protect. This cosmic force was known as ḥeka, and it was not only present in birth and death, but existent in every person, god, goddess, and object in the cosmos. The Ancient Egyptians could not have conceived of a world without ḥeka. It was understood to be a natural force that could be harnessed and manipulated by deity or human being for either harm or protection – and thus the fight between God and Pharaoh would not have felt out of place in Egyptian society, nor indeed in Israelite society. We are reminded by Rabbi Lucy Dinner that during this almost-competition between God and Pharaoh, “the Egyptians will come to realise the overarching power of the One God. The Israelites’ God transcends political boundaries, showing forth instead the Divine omnipotent will.”

In understanding the narrative in this way, however, as a fight, a contest to see who can control the forces of nature in the best and most impressive ways, one is delivered an important theological lesson.

The plagues may well be an attempt to break Pharaoh’s “hard heart” and teach him to “know the One God”, but the Israelites too need to fully embrace God in order to claim their deliverance. What God is doing with the plagues is impressed as much on the Israelites as it is on Pharaoh – and despite God proclaiming that “I could have stretched forth My hand and stricken you and your people with pestilence, and you and your people would have been effaced from the Earth. Nevertheless, I have spared you for this purpose: In order to show you My power, and in order that My fame may resound throughout the world”, the Israelites continually struggle with their obedience to God throughout Torah.

We’re not so different, in 2021, to Moses and the Israelites of yesteryear, and it is that which brings me both relief, but also contentment in my relationship with God. Our relationship with the divine changes over the course of our lives, sometimes more often than not, and I am reminded of a poem by Rivka Miriam, in which she describes her own ever-changing relationship with God:

As we collectively struggle with the harshness of life in this time, I am drawing surprising security in my sometimes-tempestuous relationship with God, and this week’s portion reminds me that if Moses can struggle, and the Israelites continually do so, then it is not for nought that we call ourselves B’nei Yisrael.