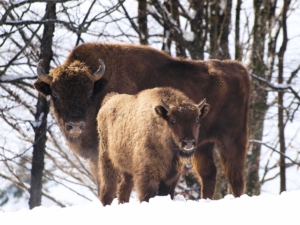 Kent is hardly the Wild West, yet in 2022 it promises to become just a little wilder: sometime in the spring, four European bison will be released into ancient woodland near Canterbury as part of a wilding project designed to increase biodiversity.  This environmental scheme is based on bison being a keystone species who unintentionally act as ‘ecosystem engineers,’ through natural behaviours that effectively manage the woodland, encouraging other species to thrive.  Still the introduction of wild animals (each weighing the same as a small car) is not something to undertake lightly: two bison rangers were appointed months before the animals are due to arrive and every level of the environment will be closely monitored, from the composition of the soil to human visitors’ experiences.

If releasing animals can prove unexpectedly complicated, so too can Torah’s description of getting ready to release the Israelites from Egyptian slavery.  The opening of Parashat Va-eira finds God speaking to Moses after his first visit to Pharaoh, which only made life harder for the Israelite slaves: Moses returned and asked, “Why did You bring harm upon this people?  Why did you send me?”  Now Va-eira begins: “God spoke to Moses and said to him, ‘I am the Eternal’ ”, going on to promise to deliver the Israelites “with an outstretched arm and through extraordinary chastisements” (Exodus 6:2, 6).  As the Exodus from Egypt begins, the drama of the first plagues will fill the majority of the parashah, making it easy to overlook its very first two words – which are less innocuous than they may initially seem.

A quick scan of the following chapters reveals that “vay’dabeir Elohim” (God spoke) disrupts a familiar verse opening formula by using a Divine name other than the Tetragrammaton.  Although both vay’dabeir and Elohim are individually very common words, the Masoretic notes reveal that their combination in this specific phrase occurs only three times in Torah: in Genesis 8:15, Exodus 20:1 and here.  So is it possible to trace a thematic link between these three cases, beyond the fact that each occurs within a passage where use of the Tetragrammaton is more common?

Exodus 6:2 opens God’s reiteration of promises to bring the Israelites out (v’hotzeiti) from slavery that has recently become especially ruthless; similarly, Genesis 8:15 introduces God’s command to Noah to come out (tzei) of the ark after the Flood and the Divine promise that humans will increase on the earth.  These are moments of transition into new beginnings: in the same passage God establishes a covenant with Noah and his descendants, while in Va-eira the soon-to-be-freed Israelites are promised a renewed relationship with God.  Yet the ability to hear these promises cannot be taken for granted, especially not with people traumatised by recent experiences: perhaps the name Elohim, commonly associated with God’s harshness or strict justice, is used because for Noah in the ark and the Israelites in slavery, a stern command is needed to propel them out into a world that has been, or will soon become, devastated.

Commentating on Exodus 20:1, Rashi highlights the unusual use of Elohim amid a passage that more broadly uses the Tetragrammaton: he explains that God’s judging aspect was needed here lest one think that the Decalogue contains optional instructions for extra brownie points; instead, failure to obey these laws will incur punishment from the divine Judge.  Once that is established, however, the Divine attribute of mercy can return; indeed, in all three cases, Elohim gives way to the Tetragrammaton in the next mention of a Divine name.

Exodus 20:1 references the command to leave Egypt, then also adds another level of transition towards a new situation.  It is perhaps as if God is now looking beyond the people’s ‘going out’ and considering more broadly to where they will go.  We might read the Decalogue as though it establishes a whole ecosystem of human interactions: understanding that as people go out into the world, their actions will affect everything from the earth beneath their feet to the feelings of other humans, and so those actions may benefit from a degree of stewardship.

Perhaps this use of vay’dabeir Elohim invites us to consider ourselves as a kind of keystone species: when we go out into the world, our everyday behaviours have the power to affect far more than just ourselves, sometimes in ways that we may be unable to imagine any more than woodland bison know they are enabling other species to thrive.  As we are not bovines, however, our challenge may be at least to try to consider our impact, both in ecological terms and in our relationships with other people: where are we acting as ecosystem engineers and where are our footprints simply destructive?

Sometimes we too may be like the Israelites in Va-eira, unable fully to hear the command to go out towards a new beginning, let alone to foresee the consequences of our actions; yet Va-eira’s opening words may hint at the possibility of becoming able to do more.  So as another January propels us into another secular new year, perhaps we might consider how to make our journey through the world less like a bull in a china shop and more like a bison in a biodiverse woodland.  Even if the initial prod to change feels harsh, may we all find our way to behaviours that contribute to the wellbeing of our world.