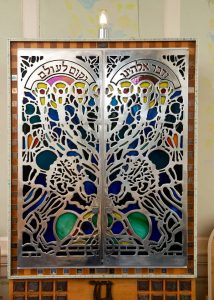 If Leo Baeck College’s Room of Prayer could talk, it would tell us about the vivid life in Finchley’s Manor House. For generations students of Leo Baeck College meet here for prayer. Regularly people from various countries experience a life changing moment: They enter this room to meet the Beit Din, three rabbis sitting behind a table in the middle of the room and then leave this room as Jews. At least once this room has experienced a Muslim prayer during a Jewish-Muslim scriptural reasoning encounter on site. Photographers spent time here to find nice motives among the rich ornaments on windows, chairs, ceiling, walls and ark. At evenings and weekends children sometimes use the room as one of their classrooms or to practise their bar or bat mitzvah portions. What I observed during my ten years daily life in Manor House is just a little glimpse of what this room has experienced since it was created in 1986 by artist Roman Halter (1927 in Chodecz, Poland – 2012 in London) together with his daughter artist Aviva Halter-Hurn. Since then this room is full of Jewish life. I guess not many of those who enter and leave reflect on the room itself. But this shabbat, Shabbat Nachamu – the Shabbat following Tisha beAv and the first of the 7 shabbatot before Rosh haShanah really tempts to do so. Because LBC’s room of prayer is a 3D interpretation of this week’s Haftarah.

LBC’s Room of Prayer is full of flowers. The menorah itself, whose light is a symbol of God’s presence, is modelled after a plant. (The form of the menorah used in the Room of Prayers is an old logo of LBC itself, used from the 60s till 90s.) The torah is called a tree of life. The dominating colour in the room is yellow. The artist Roman Halter once said, that his art was partly inspired by a poem written in July 1942 by Pavel Friedmann (1921-1944) in Terezín: “The Butterfly. The last, the very last, so richly, brightly, dazzlingly yellow. … Such, such a yellow is carried lightly ‘way up high. It went away I’m sure because it wished to kiss the world goodbye. …The dandelions call to me and the white chestnut candles in the court. Only I never saw another butterfly. That butterfly was the last one. Butterflies don’t live in here, In the ghetto.” I think there is no butterfly in the room, but there is yellow all over and there are many birds. The smell of the flowers, the sound of the birds, light coming through the flowers ornamenting the windows making visible the letters with words from Tanakh and Mishnah, the word kavod “God’s presence” with special ornaments – all under a chuppah, the symbol of the eternal covenant between God and Israel: the room is full of positive associations … if one does not look closer.

This Room of Prayer is the centre of the whole site, exactly between the Shoah memorial down in the garden, visible through the windows of the Prayer Room and quoted by the zechor candle holders inside the Room of Prayer itself and written under the opening of the ark. “Remember” says this room. On the other side of this imaginative line is the statue in front of the entrance symbolizing new life, a young sprout of a plant. Later when I worked at LBC, often sitting in this room, I started to wonder about the strange inscription on the ark: ודבר אלהינו יקום לעולם “But the word of our God will stand forever” – a most unusual torah inscription. But not unique. Until a few years ago it was also on the ark in LJG Amsterdam, till today it is somewhat hidden on the ark at Belsize Square Synagogue, both congregations founded by refugees from Nazi Germany – as were the founders of Leo Baeck College themselves, as was the artist Roman Halter. The strange words on the ark are a quote from this week’s Haftarat Nachamu, Isaiah 40:8. The words were deliberately chosen. What must have been the feelings of those refugees commemorating Tisha beAv, images of their own destroyed “temples” in their minds. The words that this generation chose to write on the ark was not the common “Know in front of whom you stand”– many will have had more doubts about this than knowledge. Instead they quoted from Haftarat “Nachamu”: “But the word of our God will stand forever”. As our Haftarah puts it poetically: “All flesh is grass, all its goodness like flowers of the field: Grass withers, flowers fade … ודבר אלהינו יקום לעולם but our God’s word (or thing or issue) will stand forever.” Judaism will not be destroyed. Because of what this week’s torah portion formulates: to teach Judaism to our children and students, to have Jewish values in our hearts and thoughts and on our doorposts. It gives an example to all generations to yes, see the dark sides of our world visible in every generation, but not to become desperate and hopeless. The reminder that “the word of our God” – a word that creates new worlds and forgives, changes and gives hope – will stand forever, we study this word, add our interpretations, our discussions. This week’s Haftarah can reaffirm our Jewish identity, to teach hope and to live this confidence so that we get slowly prepared during the next seven weeks, full of comfort and trust, for Rosh haShanah and this year’s High Holiday season whatever the future will bring.