Wash your hands, stay alive and be Jewish. 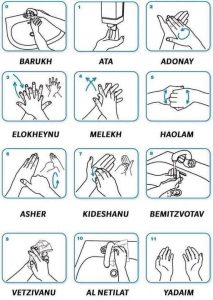 “And he set the laver between the tent of meeting and the altar, and put water therein, wherewith to wash; that Moses and Aaron and his sons might wash their hands and their feet thereat; when they went into the tent of meeting, and when they came near unto the altar, they should wash; as the LORD commanded Moses” (Lev.40:30-32).

When I discovered these verses in Pekudé, one of the two parashiyyot of this week, I confess that I laughed. A little nervous laughter, I admit. I am writing these lines from a country where the head of state has just pronounced the confinement of the population.  The ultimate barrier after days of respecting what we call in French  “gestes barrieres” ,  “gesture barriers”. A nice way to design the fact that we have to wash our hands dozens of times a day until they become rougher than those of our great-grandmothers who did not know the dishwasher.

What better opportunity then to explore the virtues of this gesture to which our sages gave a sense as sanitary as it was ritualistic.

In the Pekudey parashah, the meaning of washing the hands of the priests who entered the tent of meeting seems easy to understand. What is a sacred need to be separated from the vulgar, from everyday life. Water plays here both the role of purifying agent by ridding the priests of dirt but also as a separating agent from the chol and the kodesh.

Both Moses and Aharon and his sons are subjected to this rite in exactly the same manner. No lighter process for Moses, however wise.  No graduation in impurity among the sons of Aaron. Rashi sees this as equalization in relation to the priestly function but we can also notice that this equalization refers each of his high characters to their corporality, to their humanity.

In Hebrew, the blessing ” Netilat Yadaim ” literally orders us to ” raise ” our hands…

The person raised his hand under a jug to receive the water. This gesture obliges us to be much more active in the purification process than simply plunging our hands into a basin. Nothing in the Jewish ritual of hand washing is static: neither the person who raises his hands to receive the water nor the water poured in several passages: the water that became impure with the first contact of our hands being driven out in turn by a new supply of water that replaces it etc…. Like the mikveh, hand washing can evoke a rite of passage: from the impure to the pure, from the lambda activity to that of eating etc…

A passage from the book of Kings pushes this symbolism of the rite of passage to its paroxysm. In the second book of kings, while King Jehoshaphat is in difficulty and seeks a prophet, his servant answers him:

If at the beginning we could think that the fact that Elisha washes Elijah’s hands indicates a simple relationship of subordination, even of servitude, the biblical writer here transforms this gesture into a mark of succession.

In our tradition, hand washing follows one after the other. Hands are washed in the morning for hygienic reasons. For the rabbis, there was no question of pronouncing the name of god in a prayer before washing their hands, these hands which at night could have touched parts of the body usually “covered”.   Hands are washed in the morning for mystical reasons according to other rabbis according to which washing hands in the morning was meant to drive away evil spirits from the night.

And we wash our hands again and again. Before every meal the sages of the Talmud say. Before and after insists Shulkhan Aruch and Maimonides. We wash our hands. With or without blessings.  We wash our hands in Passover at the time of “Rakhatz”, the stage before eating herbs soaked in salt water.

We finally wash our hands when we leave the cemeteries because we need to separate ourselves from death, to try to make it slide over us as the water slides over our hands. A psychological “barrier” gesture even before the infection scientists created the expression.

At the time I am writing these lines, it has already been two days since I haven’t gone out or just a few minutes for a run, with glove and mask and standing one meter away from each human being I meet.  I look at these verses about ablutions in parashat Pekudey (Lev 40:30-32).  The masoretes framed them with the mark of a Setumah parashah, a closed section.  This mark consists of a hole, a distance left in the same line to separate verses.

The halakha obliges the sofer to respect its spacing, otherwise his work will be invalidated.  The law of my country now obliges me to respect the rules of distancing. We no longer have to learn the patience and discipline of the sofer.  When he writes a sefer torah, the sefer torah scrupulously measures the spaces left between the sections, but he also deliberately leaves gaps in the narrative. Each gap corresponds to the name of God and it is only after going to immerse himself in the mikveh that he will fill these gaps by writing the tetragrammaton.

So for the time being, let us not be afraid of the void. Young or old people, let’s respect the confinement measures taken to varying degrees in our different countries.  Let us allow ourselves to believe that the shekhinah will fill this lack of “physical” presence that we feel. But to remain present for our loved ones even in absence requires no miracle, a phone call or an email will do the trick while waiting for the end of this episode.

I am still looking at this closed section of our parashah . A verse further away, starts a petouhah… an open section.  What time does a verse have: a minute? An eternity? Anyway, we’ll eventually get out of our closed section and continue washing our hands, a little more conscious than before of the significance of this gesture.