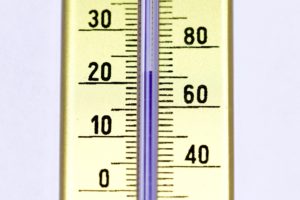 Walk past any charity that’s fundraising – especially if they’re fundraising for a new building – and you’re bound to see a giant thermometer. Every new donation is marked onto it with a nanometer of red Sharpie (“£20 yesterday and another £20 today… mark up £40!”), until eventually the target is reached.

The thing is, that isn’t actually how thermometers work. They don’t ease their way towards a target. The mercury within expands or contracts according to temperature, and the reading goes up as it gets hotter and down as it gets cooler. It’s not as if we say to ourselves, “Just a little bit more heat tomorrow and we’ll hit the top of the scale!”

Thermometer are not cumulative. In other words, two consecutive 20C days do not make the thermometer display 40C.

So why is a thermometer the archetypical symbol of any fundraising project when its function is totally different?

The first such project to have been undertaken by the Jewish people is, of course, our ancestors’ tabernacle, which was funded entirely by contributions from the Israelites. The end of this process is recounted in Exodus 36, and something unprecedented – and perhaps not repeated since – happens. The craftsmen come to Moses and say, “The Israelites are bringing more than is needed!”

More than is needed! The mercury has burst through the top of the thermometer and the donations just keep on coming.

Accordingly, Moses called a halt to the frenzy of giving, and Exodus 36:7 tells us: “The [Israelites’] efforts were sufficient for the work that was to be done – more than sufficient.”

In his book I’m God, You’re Not, Rabbi Lawrence Kushner quotes a Chassidic commentary highlighting the apparent contradiction: they can’t have had [just] enough and more than enough.

Oh, said the commentator, But they can. For if they had only had just enough – if the amount of donations received had been precisely what was needed to fit out the Tabernacle and there would be no surplus left over – that would have been insufficient. Because then, every Israelite who has contributed would puff themselves up and feel terribly important that, without their donation, the Tabernacle couldn’t have been built.

But with a surplus, each member of the community would have to accept, humbly, that maybe what they gave was among it.

If the income precisely equalled the outgoing, Ploni the Israelite could withdraw his donation in a fit of pique and that would be the end of the project. If 200 shekels were needed and Ploni took back his 10 shekels, there would not be enough left in the pot.

Being inessential – un-needed – can be a devaluing and isolating experience. One who feels they contribute nothing to their community can easily have an inferiority complex. This has always been a difficult problem, because communities do need people to contribute to them. Such contributions are essential. How can leaders avoid thereby creating a ‘second class citizen’ status for those who can’t contribute? Moses’s ingenious answer was to make everyone equal in their inessential-ness. Everyone knew that they were slightly surplus to requirements, but at the same time they were somewhat needed as well.

This is where the Great Thermometer of Fundraising comes back in. Because a good, communal, egalitarian building project – like Moses’s management of the Tabernacle – mingles every contribution and makes them indistinguishable.

When the temperature falls from 20C to 10C, it’s not any particular ten celsiuses that have been lost. The temperature is one indivisible collectivity, to which many different factors contribute and to which none is directly essential. Driving car helps raise the temperature but I can’t point to any specific bit of mercury in a thermometer that is attributable to it.

This, in fact, makes the thermometer a perfect symbol of community. Not just the sum of its parts; influenced by all; and influenceable by all.