“Then the jagged edge appears

Through the distant clouds of tears

My foundations were made of clay

As my soul slides down to die

How could I lose him?

What did I try?

That he was here with me

And I looked into my father’s eyes” 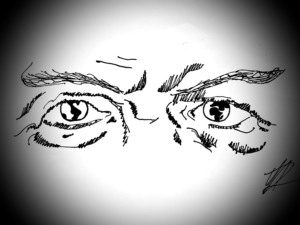 As we reach the final parasha of Genesis, the first book of the Torah, preparing to say goodbye to the last of our patriarchs, we are treated to the epitome of the deathbed motif, the drawn-out death of Jacob also known as Israel, son of Isaac, son of Abraham.

Although death and progeny and blessings are the backbone of this narrative, it is vision and eyesight which play a pivotal role in the overall life of Jacob, as it is his father’s failing vision in Genesis 27 which allows him to fool Isaac into blessing him with the birthright which was meant for his older twin brother Esau, as the aging patriarch fears his death and wishes to set the affairs of inheritance in order. In that story, Isaac is described as zakein vatich’heina einav meirot – ‘old, and his eyes were dim’ when he summons his elder son for the purpose of blessing him with the traditional birthright (Gen. 27:1). Jacob and his mother use this dimness of eye against the patriarch when they pull the figurative wool over his eyes, and Jacob the literal wool over his own arms, stealing the blessings, and absconding like a criminal. The word used for dimness of eye in this narrative is from the root kahah (תכהין from כהה), which means to grow faint, weak, or to diminish, and in the Arabic can mean cowardly. To put it mildly, this is not a kind description of Isaac, and could be seen as a flaw in his character, a willful blindness to his duties of correctly bestowing the blessings. What follows from this narrative are many other allegories to vision. First, as the fugitive son arrives at a well and sees Rachel, daughter of Laban and his cousin, he falls in love. The difference given in the description of Rachel and her sister Leah is as follows: ‘Leah’s eyes were weak, but Rachel was beautiful of form and appearance’, where the term rachot (רכות, from רך), (Gen 29:17) means delicate or soft, but can also imply weakness of an undeveloped character. Although it is Leah who is described as weak-eyed, it will be Jacob who is blindsided at the altar into marrying that older and less loved sister after 7 years of labour, before working another 7 years to earn the right to marry Rachel. And when Leah conceives their first son, she names him Reuben, ‘for the Eternal One saw (ראה) my plight’ (Gen. 29:32). Later, after leaving Laban’s house with all of his family and accrued wealth in tow, Jacob prepares to finally encounter his brother Esau, whom he had tricked through their father’s dim eyesight, Jacob wrestles with an angel all night, earning the name Israel, and naming the place Peni’el, for ‘I have seen God face-to-face’ (Gen. 32:31).

What follows is the peaceful reunification of estranged twins, the chance for Israel to be with his father again, and the story of Joseph’s dreaming, his eleven brothers’ scheming, Joseph in Egypt enslaved, and many trials braved, Pharaoh’s dreams explained, Joseph’s illustrious status gained, famine throughout the land, starvation staved off by Joseph’s hand, 12 brothers reunited, all sins forgiven and requited. And when Israel is on his journey to be reunited with his long lost favourite son, God appears to him, telling him that God will journey with him to Egypt, though it will not be his permanent resting place, and that “Joseph will lay his hand upon your eyes” (Gen. 46:4), which has been interpreted in many different ways by medieval commentators. Some render the text figuratively, that Joseph will take care of his father, while the Zohar interprets this phrase as referring literally to the act of closing one’s eyes upon their death (Zohar 1:226a). This interpretation will come into play in our parasha, specifically in the description of Israel’s eyes in his old age. At the end of this journey, in his long-awaited reunification with his favourite son, whom he had mourned, Israel declares ‘I can now die – after I have  seen your face, for you are still living’ (Gen. 46:31).

In his position of power, Joseph consolidates the kingdom of Egypt, his family settling there in the area of Goshen, and we reach our current parasha, Vayechi. It is the beginning of our current narrative which brings us to an almost perfectly familiar scene: Israel’s life is fading, and Joseph presents his two sons: Manasseh, the elder, and Ephraim, the younger, that they should be blessed by their grandfather. When Israel was still only known as Jacob, he had used his father’s dim sight to trick him into bestowing the birthright of the firstborn upon him. And when the time arrives for Israel to bestow the blessings, and he incorrectly places his right hand upon the younger child, and his left upon the elder, Joseph attempts to correct him, insisting that his dominant hand and greater blessing should be upon Manasseh’s head. Just as this is about to happen, Israel’s eyes are described for us as ‘heavy with age; he could no longer see’ (Gen 48:10). In the phrase V’einei Yisrael kavdu mizoken, the term kavdu (כבדו from כבד) means heavy, weighty, or burdensome. W. Gunther Plaut’s A Modern Commentary uses ‘clouded’ to describe Israel’s eyes, while other traditional translations use the word ‘dim’.

I argue that the eyes of Israel in this scene are not ‘dim’ (כהה) as were his father’s when he deceived him, nor are they ‘weak’ (רך), as were the eyes of his first wife Leah, whom he was deceived into marrying. Age has made Israel’s eyes heavy, a burden, as he prepares for his deathbed scene, a long drawn-out affair which begins with the very words still used by parents today to bless a boy at the onset of Shabbat: ‘May God make you like Ephraim and Manasseh’, the narrative continuing with a lengthy poetic testament of the future awaiting all of his sons, and concluding with a request to be returned to the cave of Machpelah, where his parents and grandparents are buried. Israel, at this moment, sees the entire future of his children and their progeny. His old eyes carry the weight of all that they will have to endure on that path, and he offers his predictions accordingly, not holding back in his admonishment of some and his brighter visions of others. In the final verses of the parshah, the last few utterances of the book of Genesis, when the children of Israel are still seen positively and held in good favour by the people of Egypt, as Joseph reaches the end of his life and asks for his bones to be brought out from that place, perhaps he imagines his father’s eyes, and the burden they held. And in the words of Eric Clapton:

‘As my soul slides down to die

How could I lose him?

What did I try?

That he was here with me

And I looked into my father’s eyes’

And to anyone reading this, in our difficult and weighty times, when your eyes carry the burden of an uncertain future, feeling sometimes dim, sometimes tender, sometimes clouded, and sometimes heavy with burden, I say to you as we reach the end of this chapter of our shared narrative:

Chazak, Chazak, v’Nitchazek – ‘Be Strong, Be Strong, and Let Us Be Strengthened!’