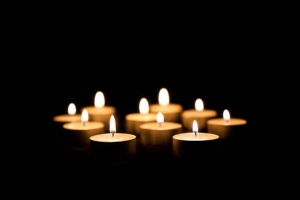 Parshat Vayechi : The Life (and Death) of a Generation

It is strange to think how it is often death, or the death of someone, that is most likely to prompt us to reflect on a life lived. This week over 50 Mexican migrants were killed when the lorry they were traveling in suddenly overturned, as they tried to reach the United States. Also this week, in America, a powerful tornado devastated towns in Kentucky, with a death toll likely to be in excess of 100 people.

And on Sunday I attended the stone setting of my 96 year-old Grandmother.

Of course, I do not equate the tragic and horrific deaths in Mexico and America with the stone setting of my family’s matriarch; she died peacefully in her home in January of this year.

However, it is these three things that loom large in my mind as I approach this week’s Torah portion, Vayechi. In fact, in our Parashah, two deaths occur that were the focus of  my musings here; at the end of Bereshit (Genesis) both Jacob and his son Joseph die.

Death is so frequent in the Tanakh, whether it is the B’nei Yisrael (children of Israel) or their enemies, that the vast majority remain nameless and unidentified. In this way not only is the impact of the deaths greatly reduced but so too is the value of their lives. I believe that this, at least in part, is a safety mechanism on the part of the human mind; the death of one fully-formed person is hard enough to bear and therefore the death of hundreds or thousands of souls would be mentally overwhelming. And so we must look to our own personal experiences of death in order to gain insight, and deepen our empathy, when we hear about large scale deaths, of people we will never know, many miles away. That is why I would like to take a moment to tell you about the death and life of my grandmother; because her life is also the life of 54 people who died in a lorry in Mexico and the 100+ who died in a tornado in Kentucky.

Over the course of my life I have experienced the deaths of family members, friends and colleagues. Thankfully, the majority of these have been both peaceful and at a “good age”. When my grandfather passed away at the age of 90, I was sad but not distraught; reflective but not distressed. Now, almost three years later, my grandmother – Grandma Ruth – is also dead. However, the end of her life marks the passing of more than simply a single person; it marks the death of so many memories.

At 96 years old Grandma Ruth was the last surviving member of her family, outliving all eight of her siblings. Likewise my grandfather; I have no grand-aunts or grand-uncles left. Indeed, to me her death marks the passing of a generation; the end of a lived connection to so many of my family and to our past.

Grandma Ruth was the last link to parents a well as several of her siblings; murdered in the Holocaust. In my Grandma’s lounge, now still and empty, there hang two small black and white photos of her parents. This is how I think of her parents; as two motionless, posed figures staring out into the ether. For my Grandma however, they were the unique sounds of their voices and their particular mannerisms. For every story she shared with us about her childhood, there will have been many more that she did not; holding them in her mind’s eye as keepsakes of another time.

Grandma Ruth was the gatekeeper to memories of the post-wars years; a vessel containing her various interactions with her siblings and their families, as well as my grandfather and his parents and siblings. Whatever memories she did not share have died with her. Those stories that she did tell to us, are now reframed in their telling as second-hand accounts.

I could go on…

The past transcends the living through our recounting and passing on of memories. These memories, whilst not history, represent the past. However, it is a past limited to specific moments in time and to the people who lived through them.

At the end of Bereshit Jacob, knowing that he will soon die, gathers his family together and does two things: 1) He blesses them in the hope of ensuring that they will be safe after he has gone. 2) He lays out his request to be buried in the family plot; the cave of the field of Machpelah near Mamre.

In our morning prayers we read in the traditional study passage that one of, “the three things whose interest we enjoy in this world, while the capital remains for us in the world to come, is […] escorting the dead.” Whilst this specific act is not directly stated within the Mishnayot upon which this study passage is based, several rabbinic commentators see it as falling under the banner of Gemilut Chasadim – oft translated as “acts of loving kindness”, which is mentioned there.  What is of particular interest is the way the rabbis framed these mitzvot; not for the benefit of the person who is suffering, rather for the person who performs such acts of care.

My grandmother’s death was a moment where I considered what of her life had transcended the past and what had sadly died with her.

Almost 11 months after her death, I am thankful of two things: 1) That she lived to see both her children and grandchildren thrive and 2) that on Sunday we were able to dedicate her matzevah (gravestone) directly next to her husband’s plot.

As we reflect on the deaths and lives of those known personally to us, let us use this to connect to the death and lives of those faceless individuals who will largely remain ever impersonal to us. When we can help, even from afar, let us ensure they have a good burial and that their loved ones are properly comforted and taken care of; for each is the death of a generation.